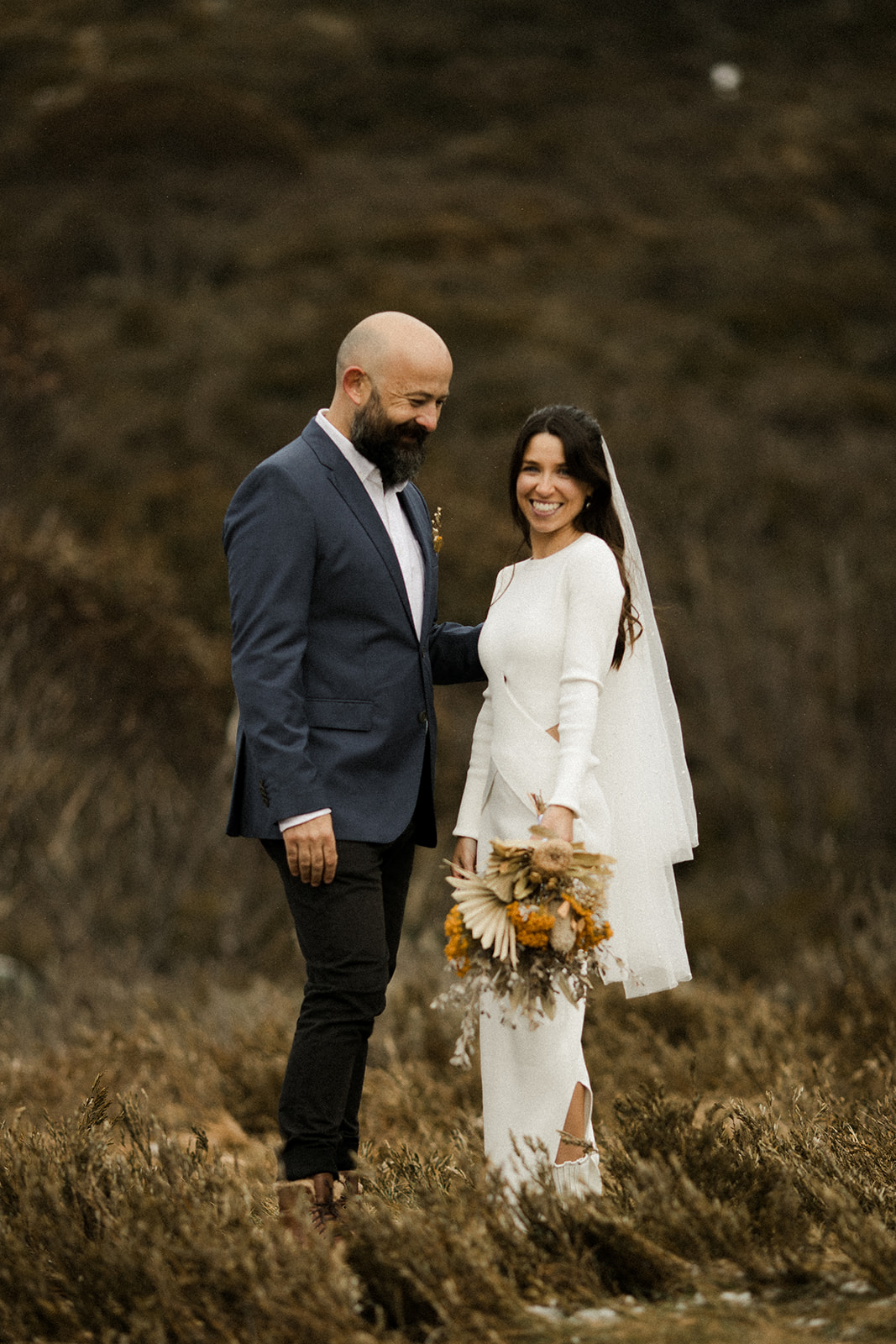 When you know, you know, right? Seems like that’s the way the story went for Sarah and Dave, who took things full-speed ahead after they met as newbies to Byron Bay. “We’ve been together for about four years. We had both moved to Byron around the same time – myself originally from Melbourne and Dave from Sydney. We first met at an art exhibition in town, then bumped into each other from time to time. We ran into each other up in Bangalow at the annual Billy Cart Derby Day and organised to catch up at Wategos a few days later. That went well, we moved in with each other about a month later, bought a house six months after (yeah, we moved quick!) – and the rest is history!”

And truth be told, you guys, we’re just a little bit smitten with today’s real wedding. Okay, okay, we’re a LOT smitten, and with good reason. From her Grace Loves Lace veil and gorge Krystle Knight Jewellery to chic white ankle boots, Sarah was serving winter bride perfection in every which way possible. And, just quietly, Dom from With Love did a heckin’ stellar job on those pics. The couple’s cute-as-a-button bub Lottie was their only guest (and an adorable one at that), making this the height of intimate big days. Sigh – we just love when it all comes together!

THE VENUE “We had two ideas in mind for our big day, but neither had a formal venue. We either wanted to get married at our favourite local headland, Hastings Point, or we wanted to do a white wedding in the mountains. We had a trip to Thredbo planned with some friends in August and once we had decided to do a small elopement, we thought it could be fun to do it there, while they were also around. Well, that trip was cancelled due to lockdowns, which was a shame because there was a metre of snow that weekend! But we rescheduled for the following month and it all worked out!”

THE VIBE “Once we had decided to get married in the mountains, I started collecting images (mostly on Instagram) of other winter weddings. I was also lucky enough to win a subscription to Hello May last year, so those magazines found a new home on the coffee table, filled with Post-it notes.

RESOURCES “We actually started off by finding the accommodation, the Cedar cabin at The Eastern Thredbo Village,  on Instagram. They connected us with a wedding photographer (Corinna & Dylan) who couldn’t make the date when we had to reschedule due to lockdowns, but they put us in contact with Dom from With Love, which we’re really grateful for. We found most of the other vendors through social media and Hello May.”

FAVOURITE DETAILS “We really wanted snow on our wedding day – which, in Australia, isn’t exactly likely in spring. The night before the wedding, we noticed there was a bit of snow, then in the morning it actually started falling quite heavily while we were getting ready. My favourite detail on the day would have been the scenery, which Dom, our photographer from With Love, captured so well. It was also pretty nice to get dressed up after working from home the last couple of years – a welcome change from loungewear. Dave said that his favourite detail was my Grace Loves Lace veil.”

THE DRESS “Because of lockdown we were only able to shop online so it was hard to shop for a dress. I’m pretty petite so finding something that’s simple and elegant but also suitable for the middle of winter was tough. We also decided to get married quite last minute so I wanted to order something from an Australian label so it would arrive in time. My sister is a dressmaker and if we had more time, I would have loved for her to make my dress, but we wanted to keep it a surprise. My brother is also a costume designer, so it would have been so good to develop the dress with him also! All of that said, I’m so happy with the dress that I ended up getting from SIR. – it ticked all the boxes. Dave wore a nice classic Hugo Boss suit that has been gathering cobwebs in our wardrobe, but he scrubbed up pretty nicely!”

LITTLE LOL “You can’t tell the temperature through photos… It was -3 degrees Celsius during the ceremony! We’re running in some of the photos and that’s not purely for aesthetics – it was to keep warm!”

WE’RE GLAD WE… “I come from a big family, as does Dave, so even though we had an elopement in mind as an option all along, we could have just as easily ended up having a 200+ person wedding. That said, I’m really happy that we did an elopement – it was so special that it was just us and our little one, and we could just do everything on the day exactly how we wanted and not really have to stress about anyone or anything else.”

STANDOUT VENDORS “Everyone was great, especially considering how uncertain everything was regarding rescheduling and so on. First, the staff at Natalie Marie were so helpful in organizing the wedding bands and getting them to us on time. Monique at The Eastern Thredbo Village (our accommodation) was amazing. Our celebrant, Ant Myers, was so easygoing and on the day we could not have imagined anyone else doing a better job, it was perfect! Same goes for our photographer, Dom, from With Love. He was so good to deal with in the lead-up and on the day – it was just like having a good friend along to take photos (and how good are his photos?!). A big thank you to his assistant Dayna also, who doubled as a babysitter for Lottie.”

If a winter wonderland wedding in the NSW Snowy Mountains appeals, there’s no-one better placed to snap the big day than the talented With Love crew. For all you brides looking for those finishing touches to your wedding-day look, check out everything Grace Loves Lace and Krystle Knight Jewellery and you’ll have a banger of an outfit. 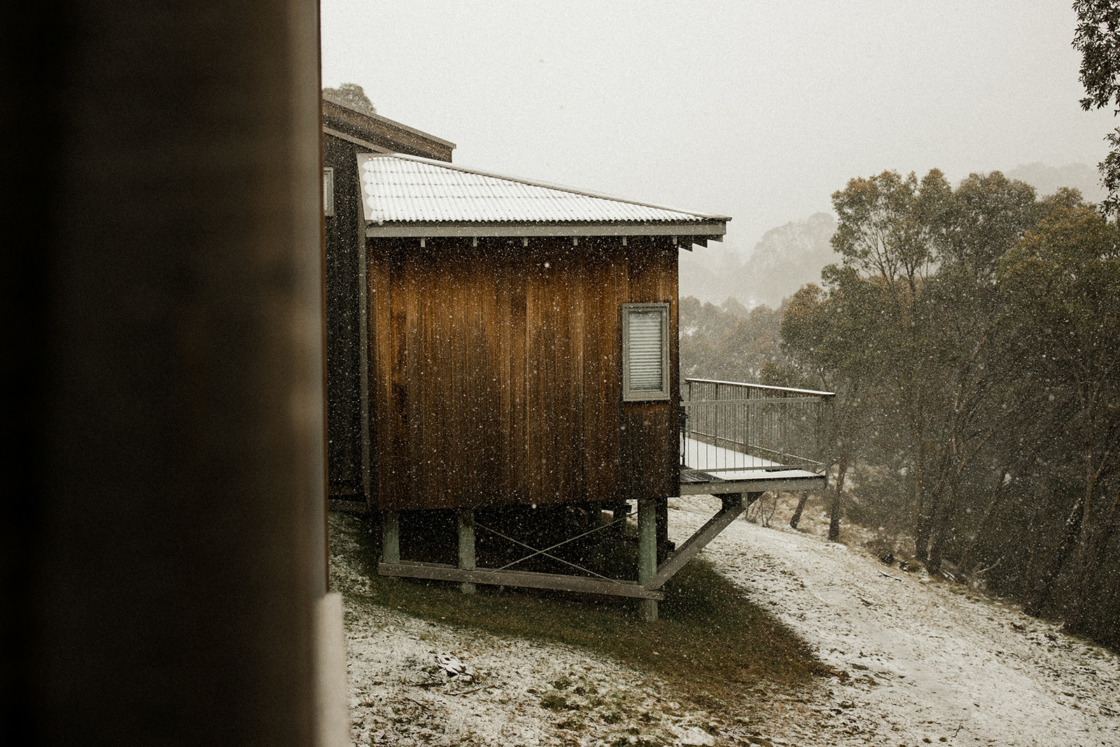 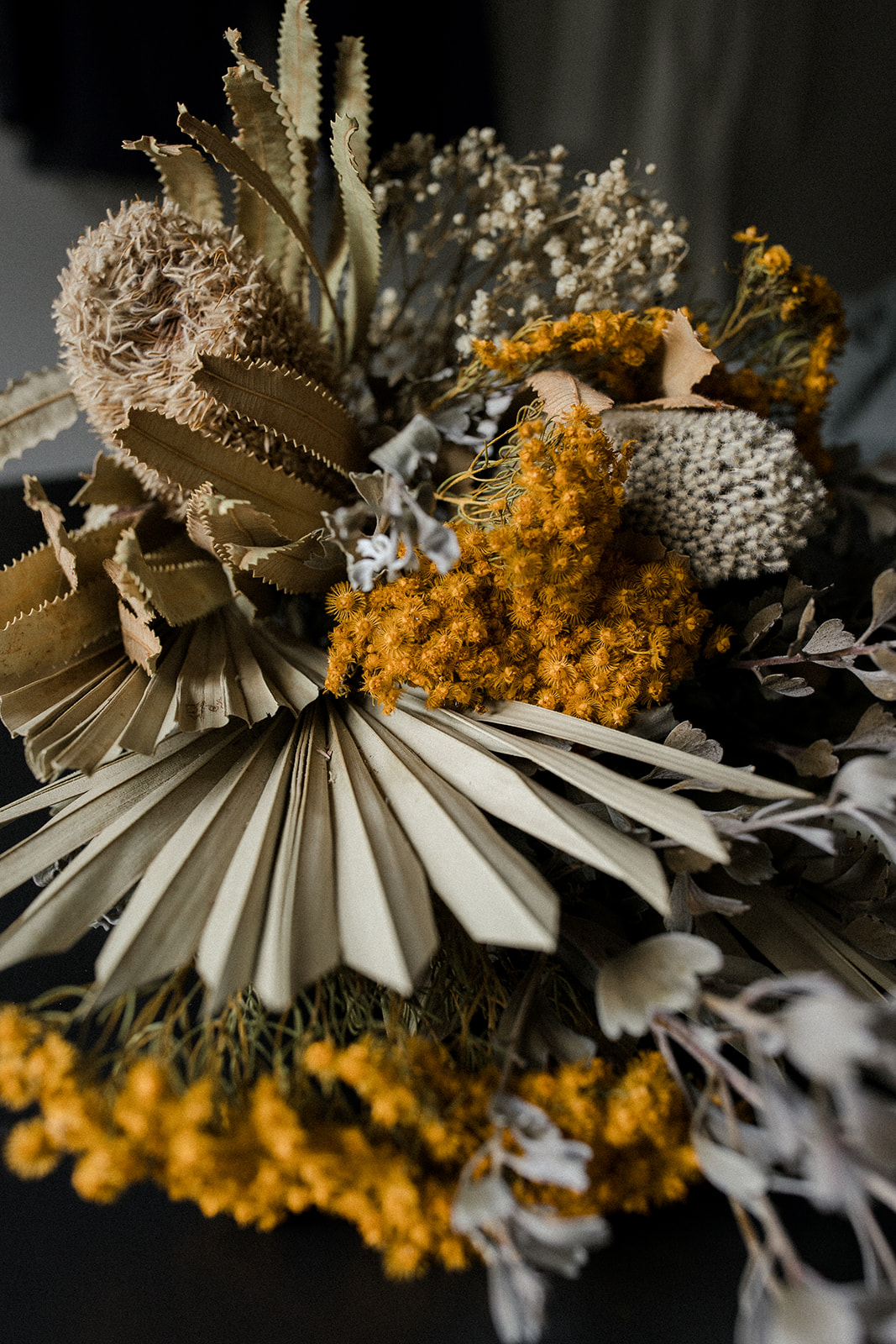 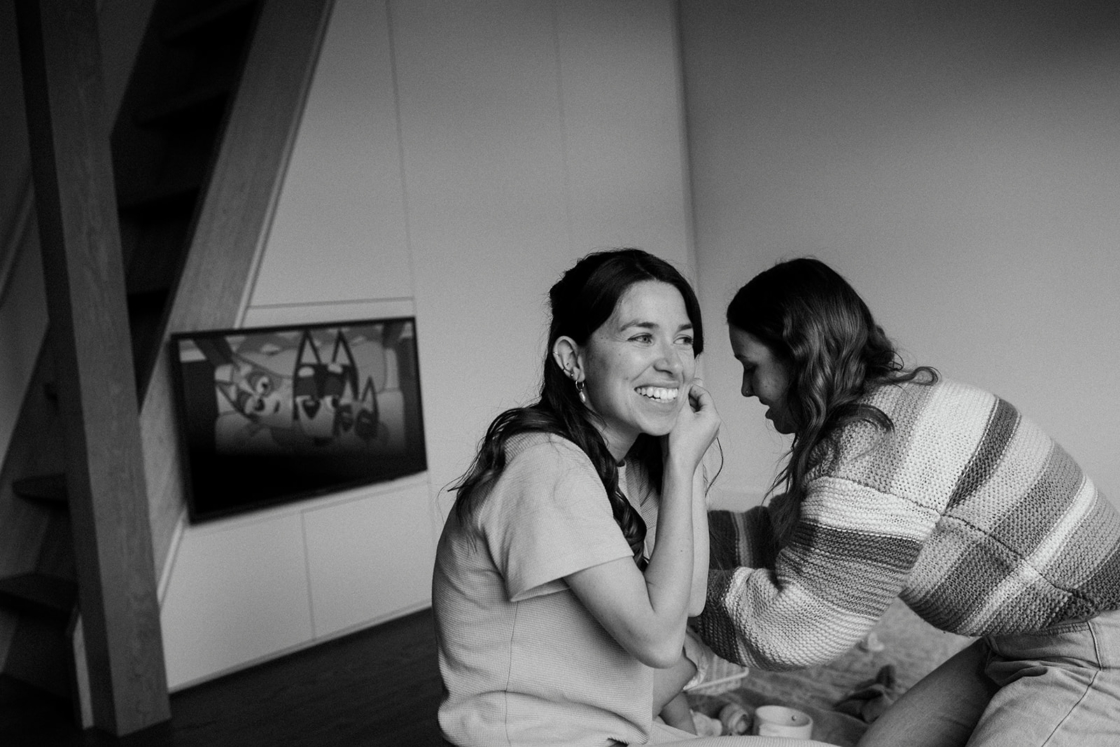 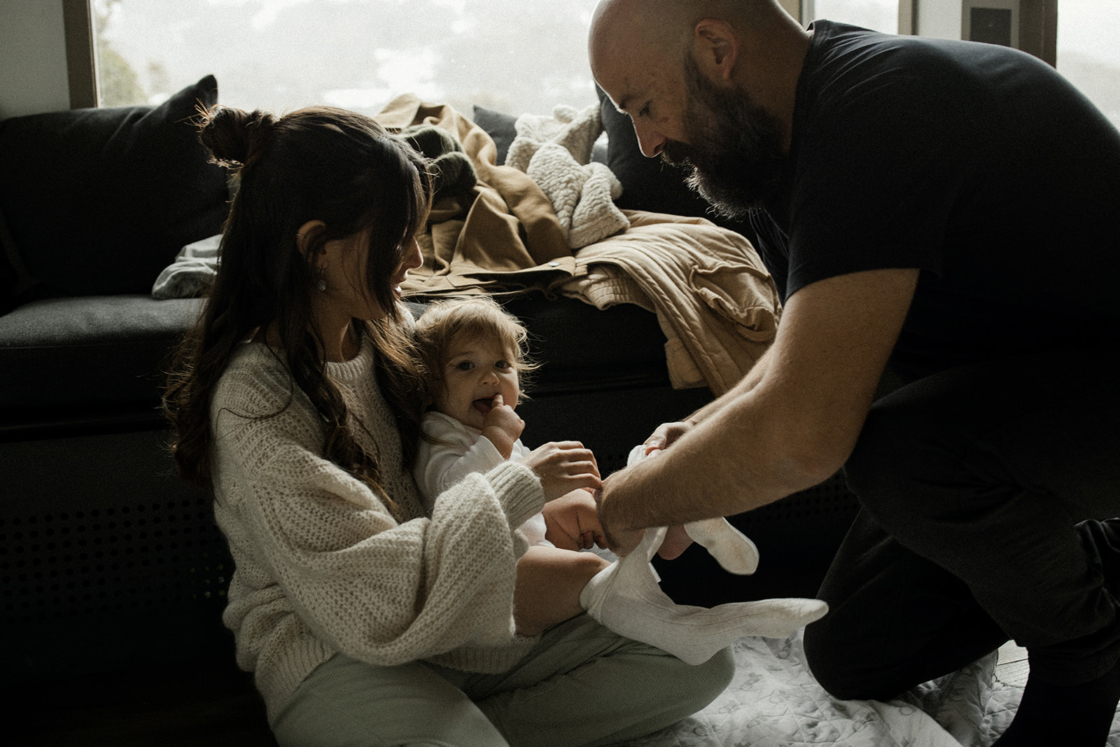 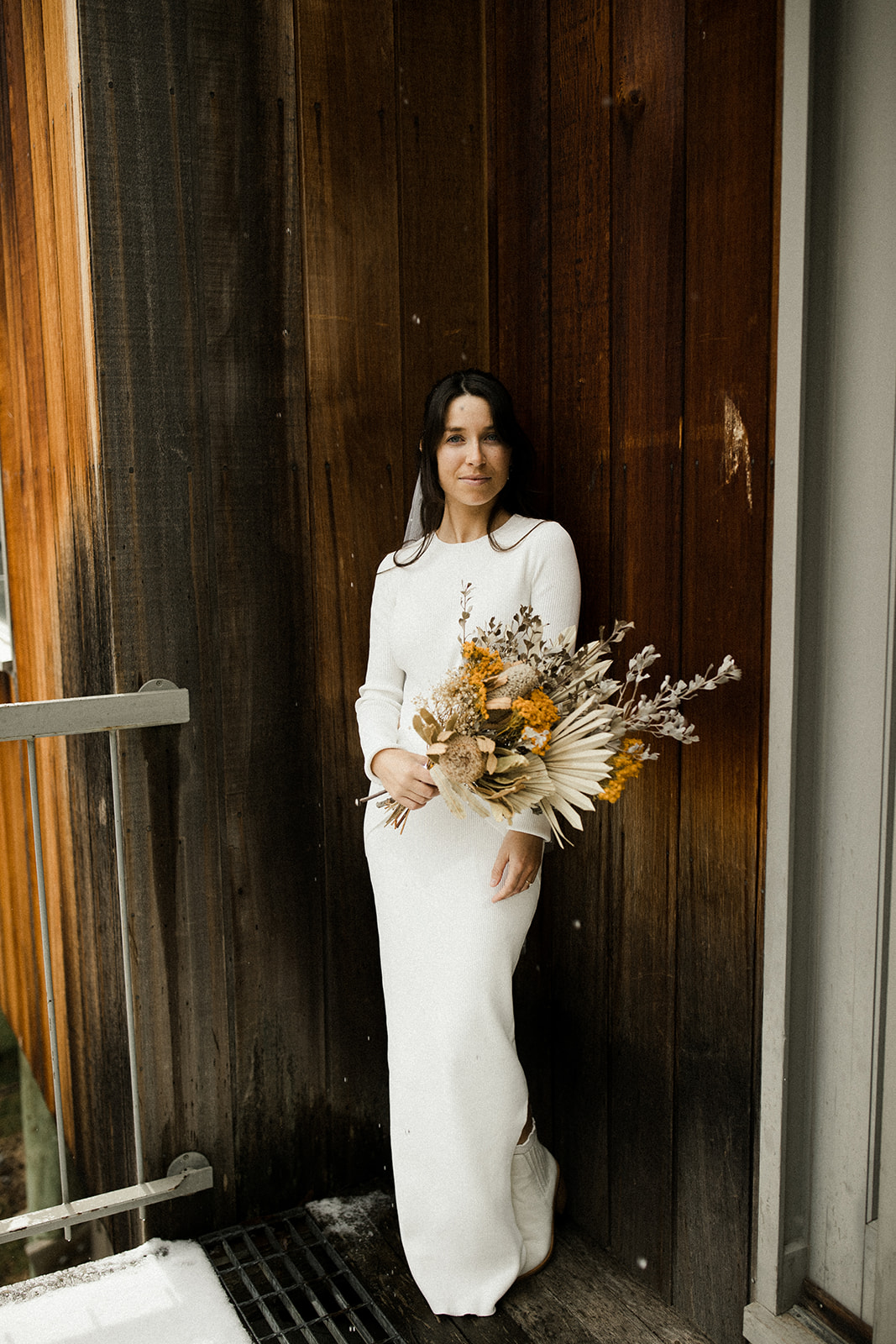 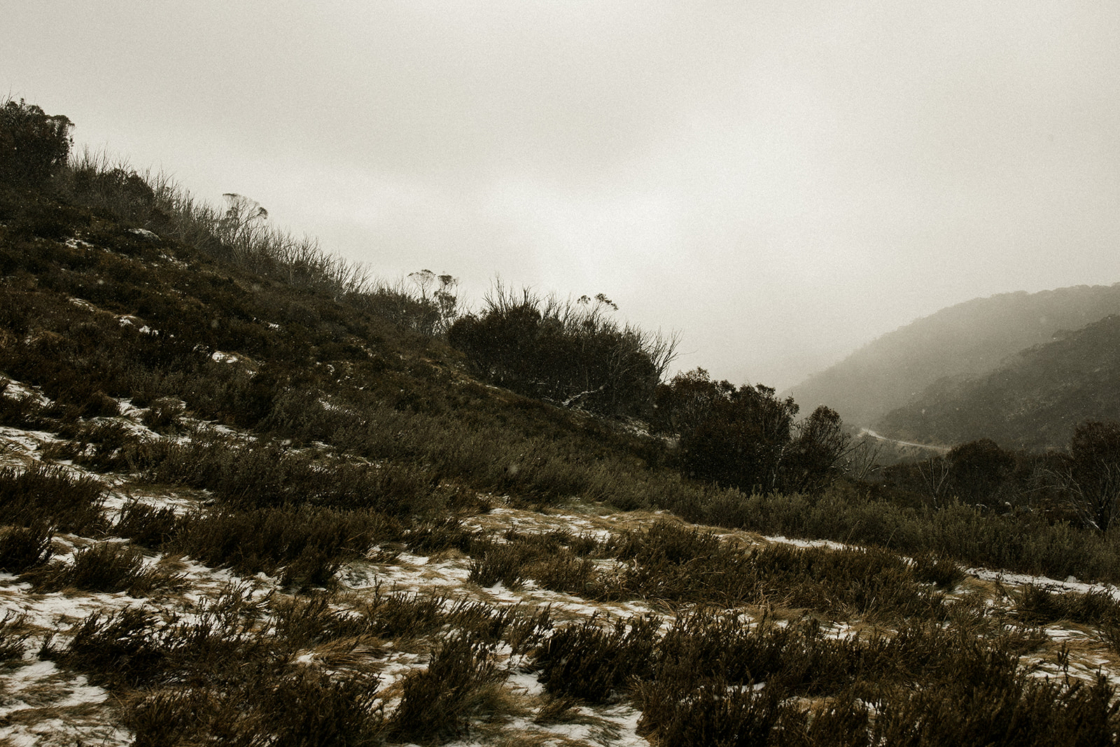 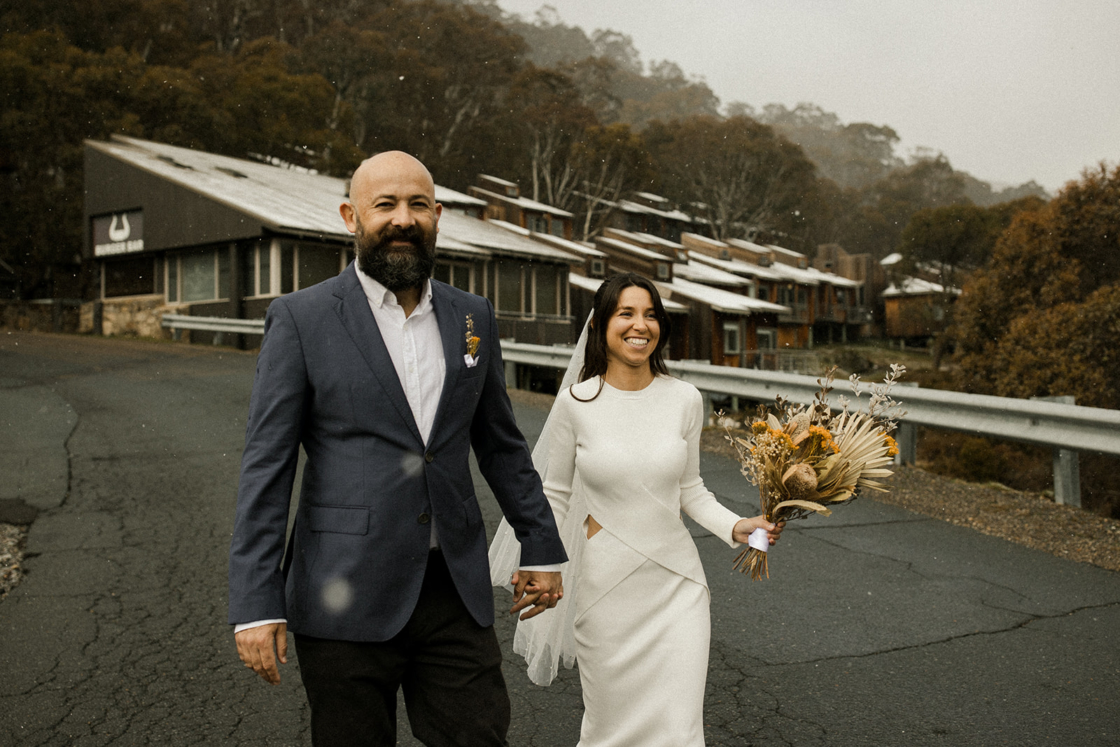 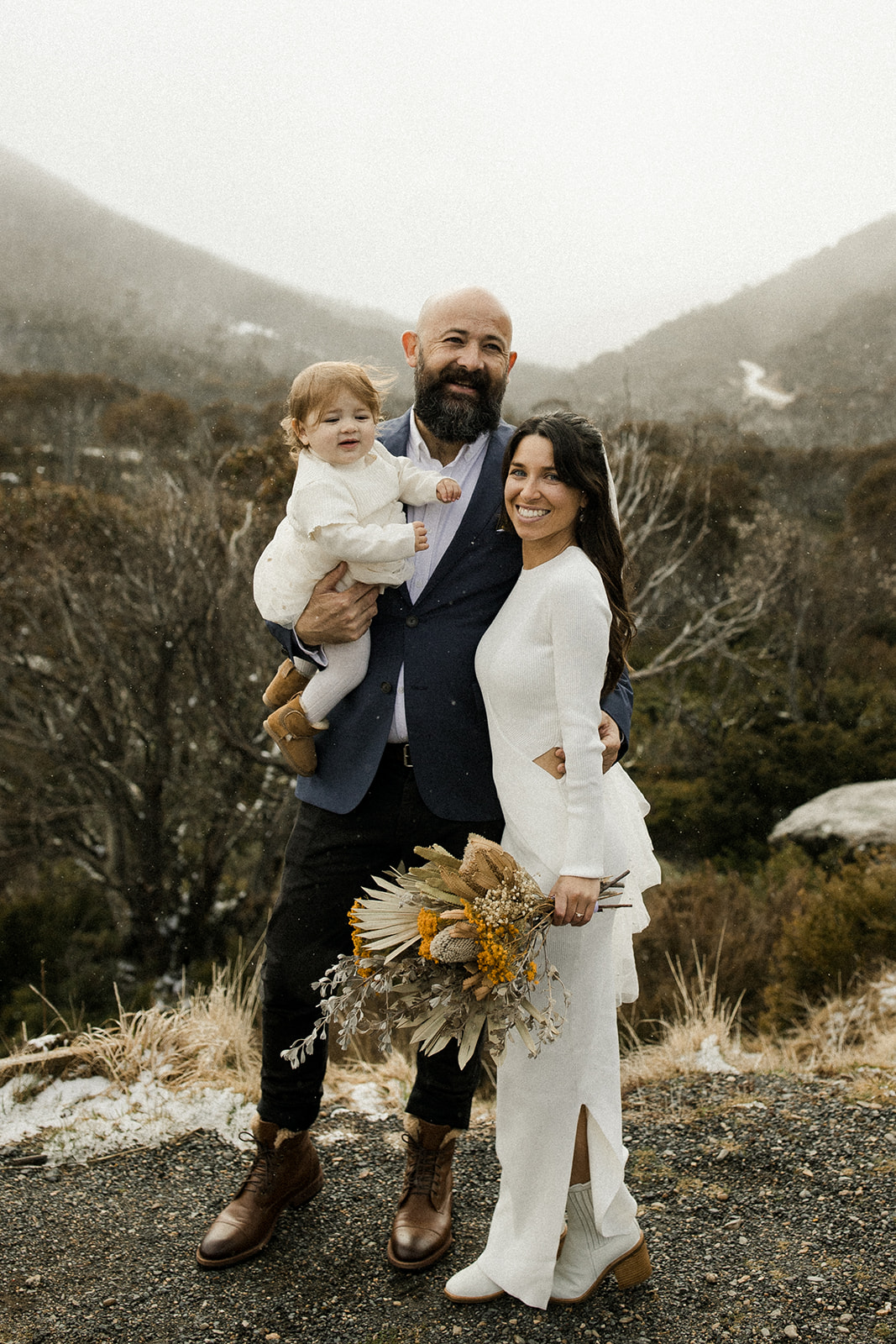 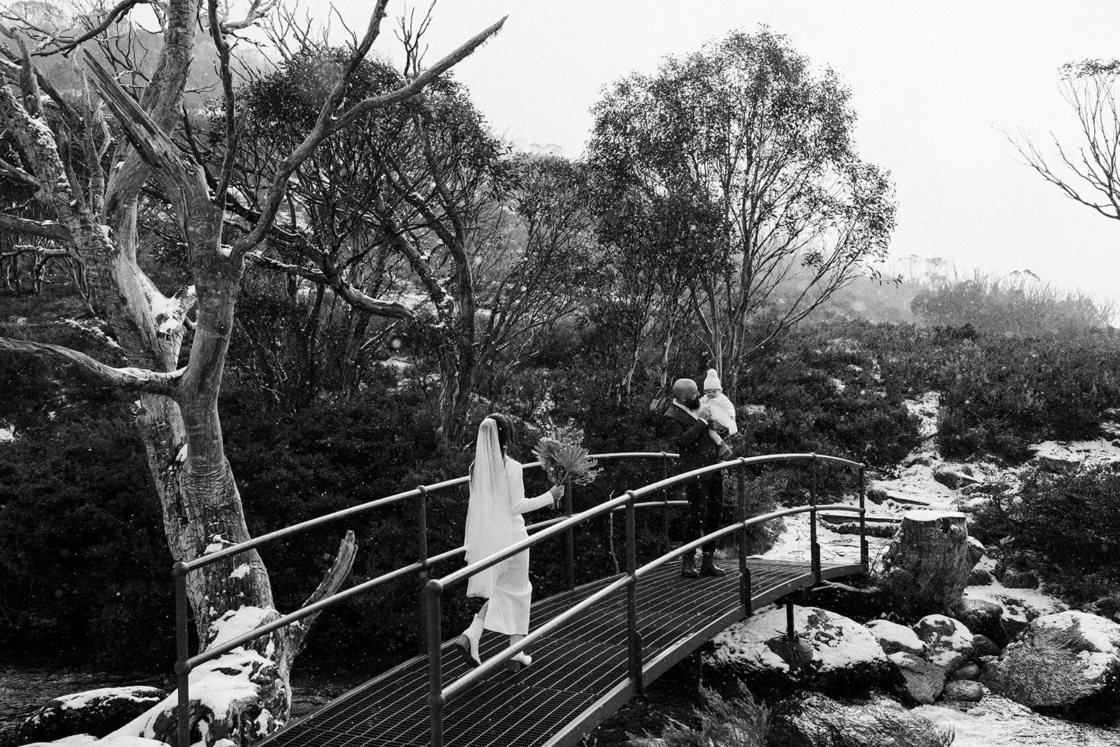 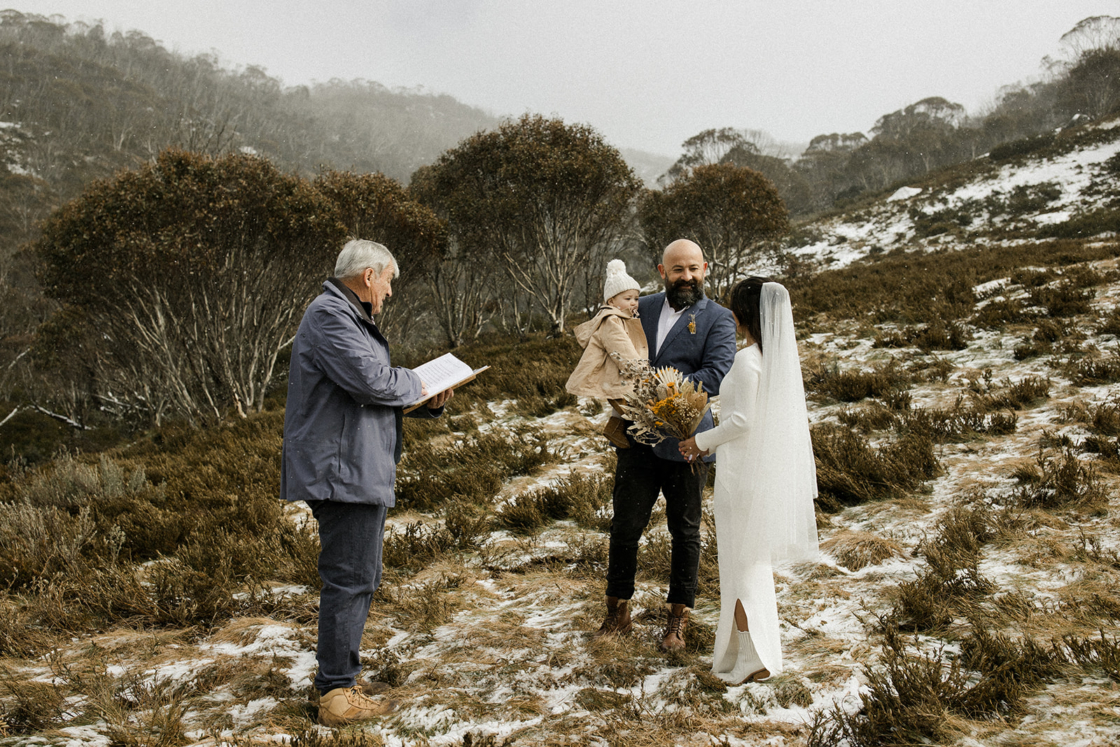 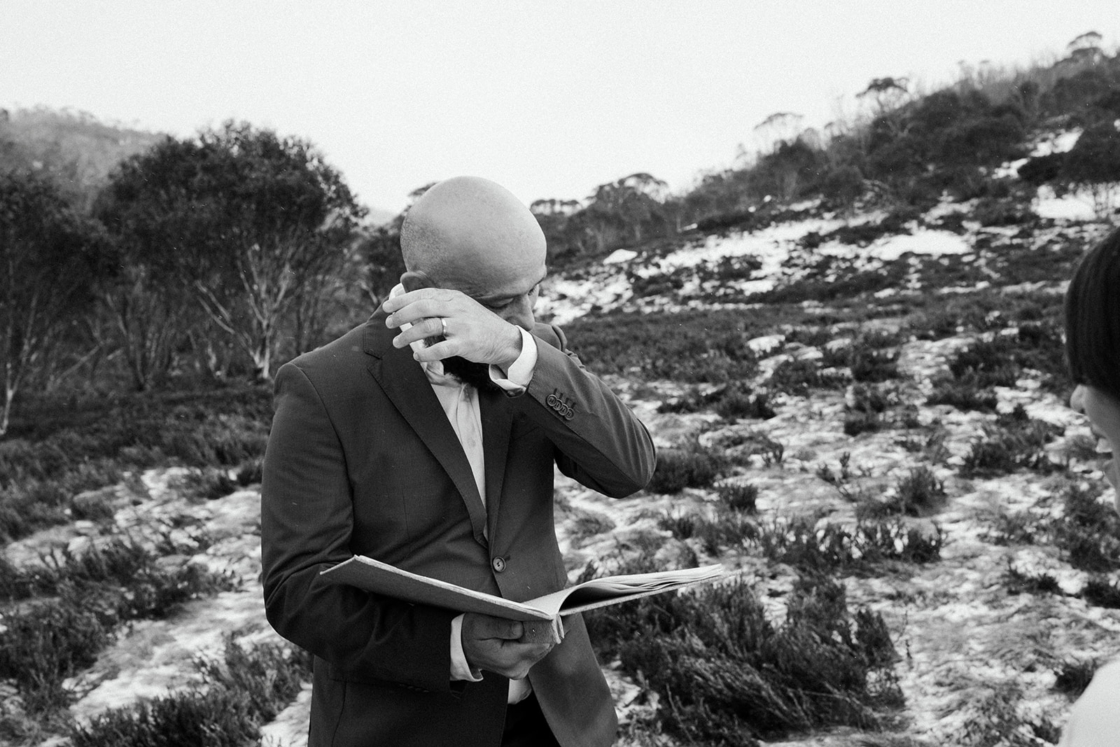 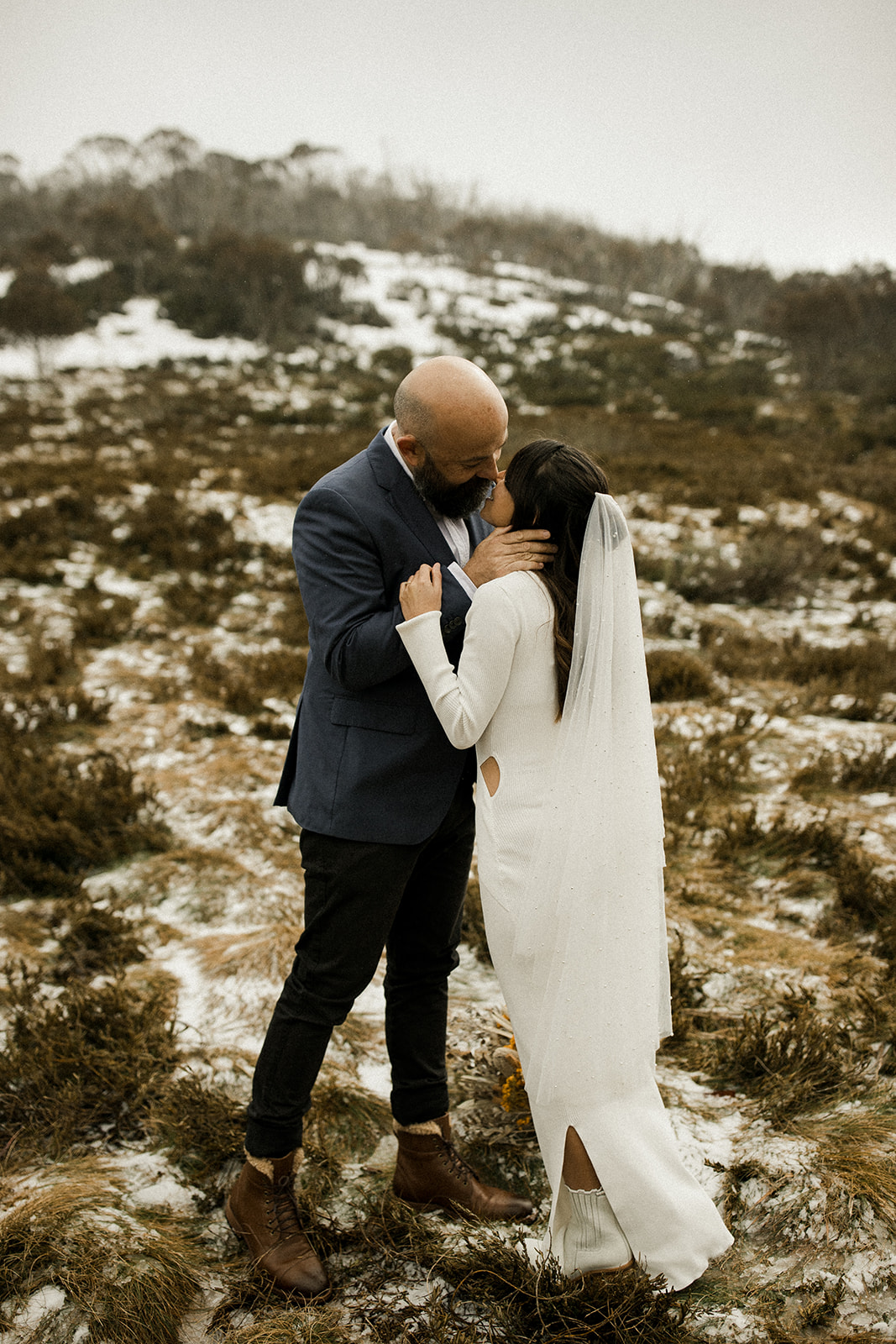 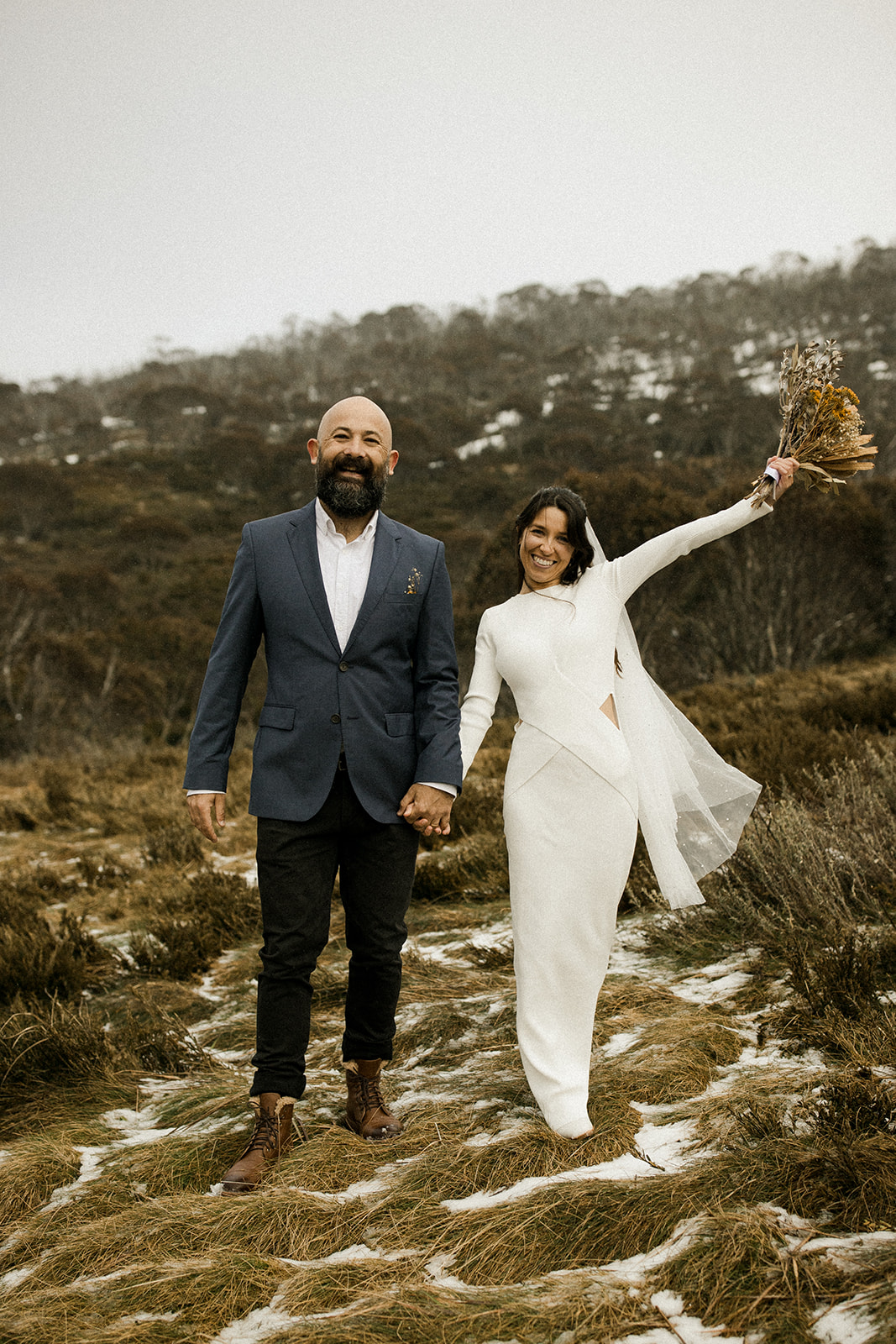 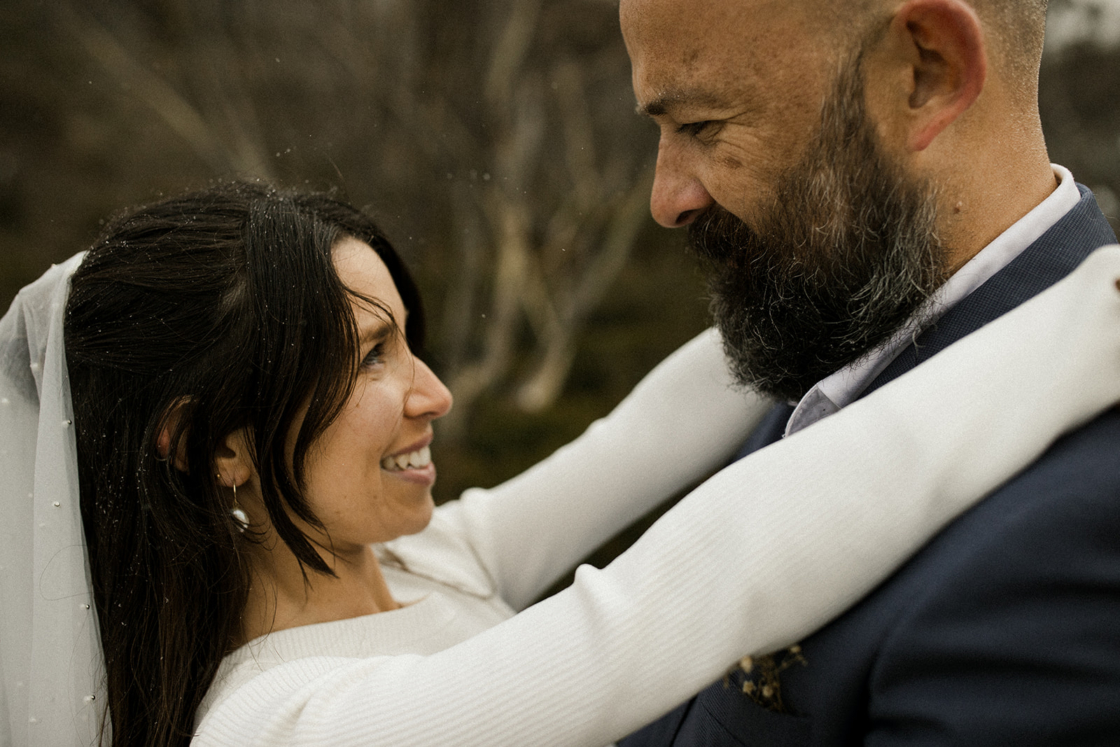 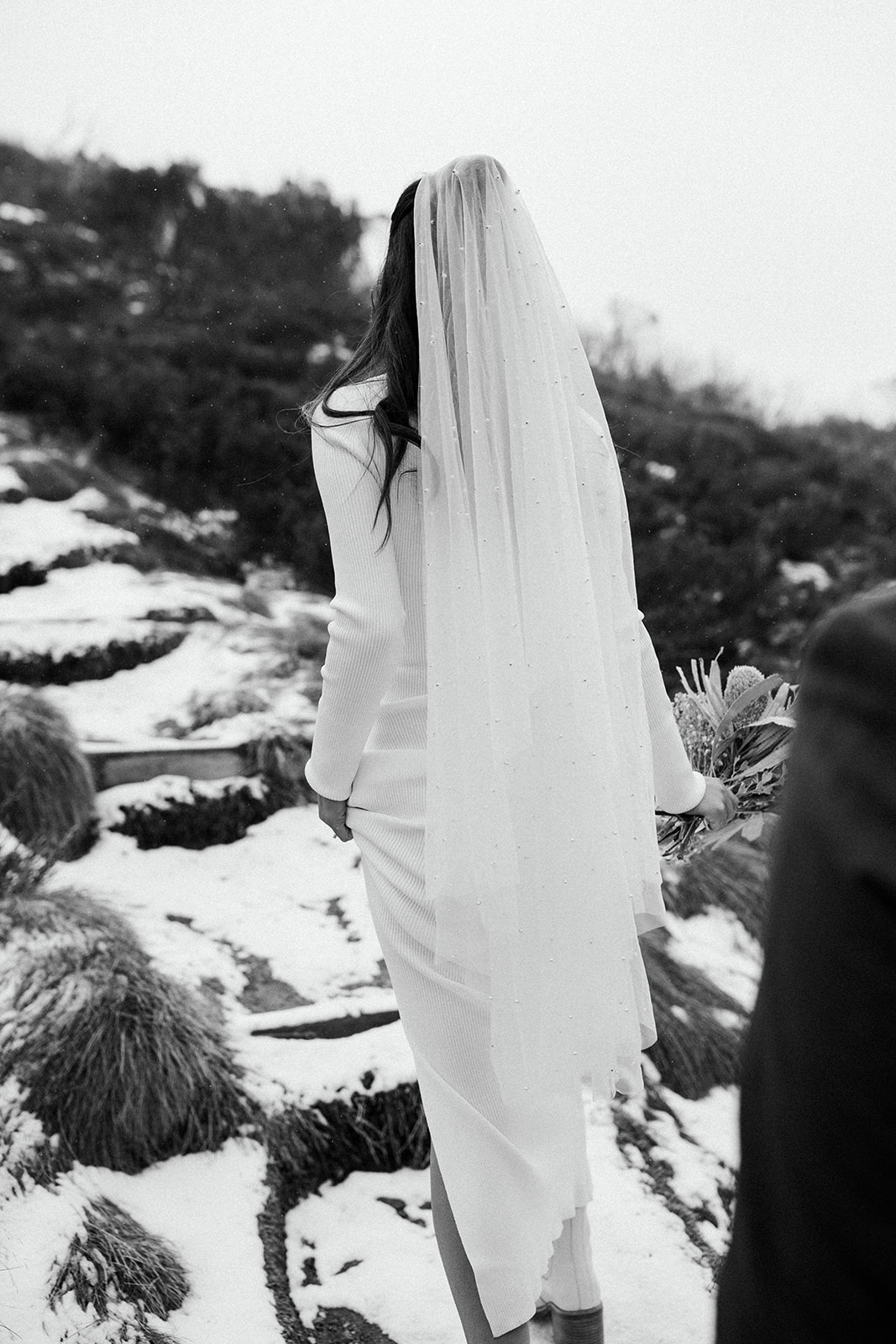 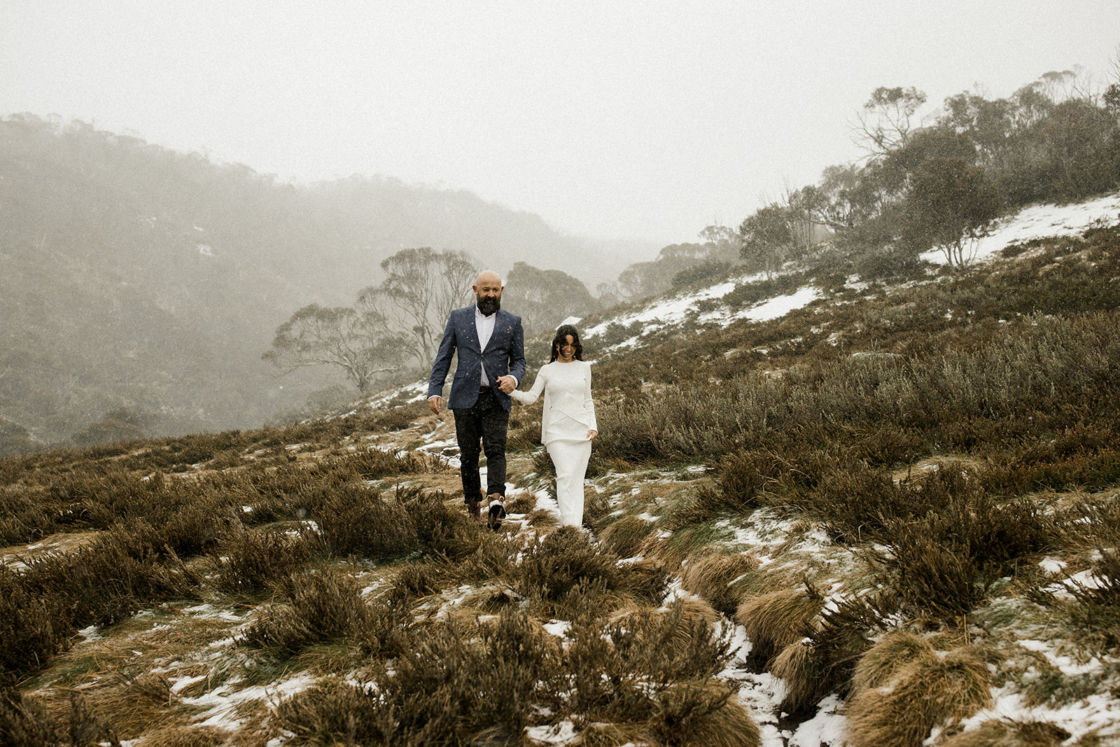 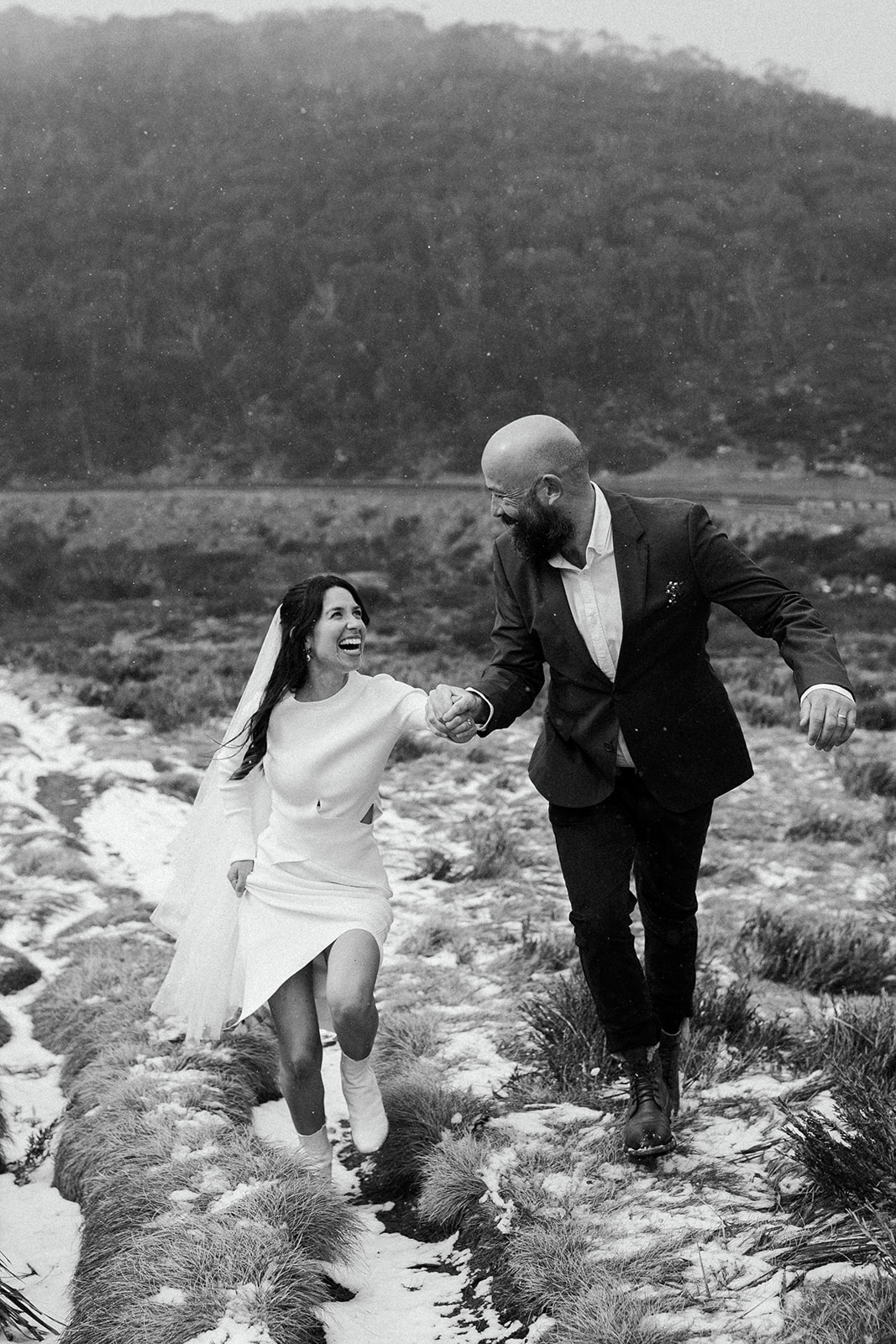 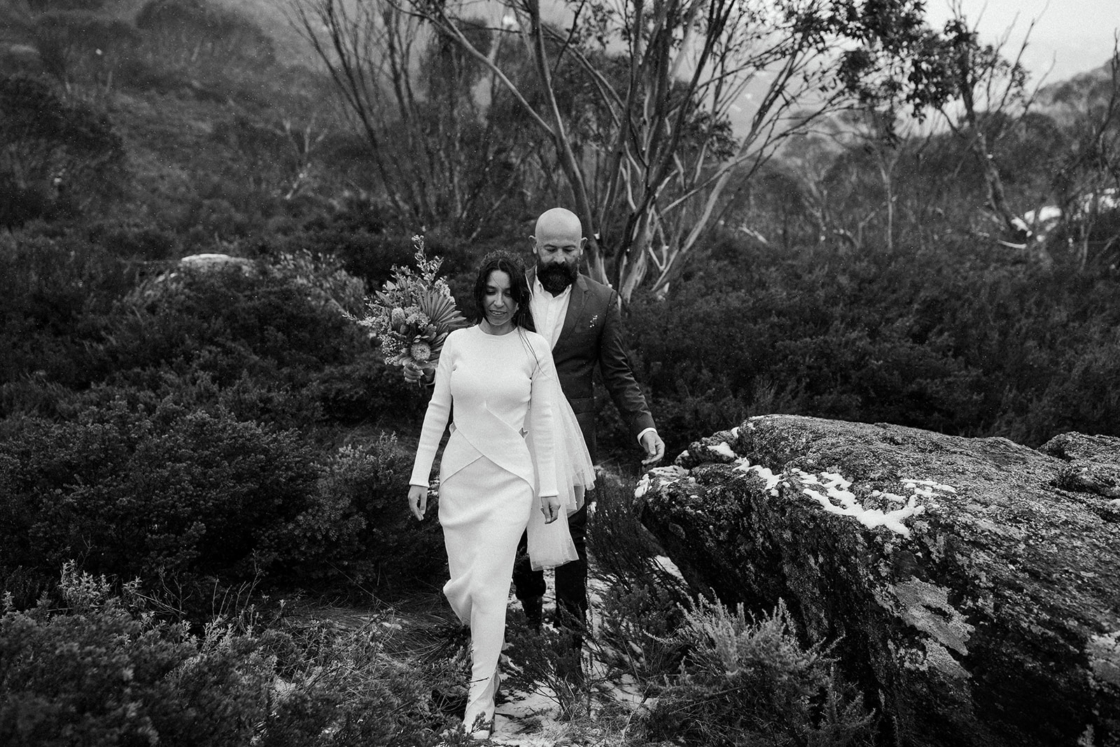 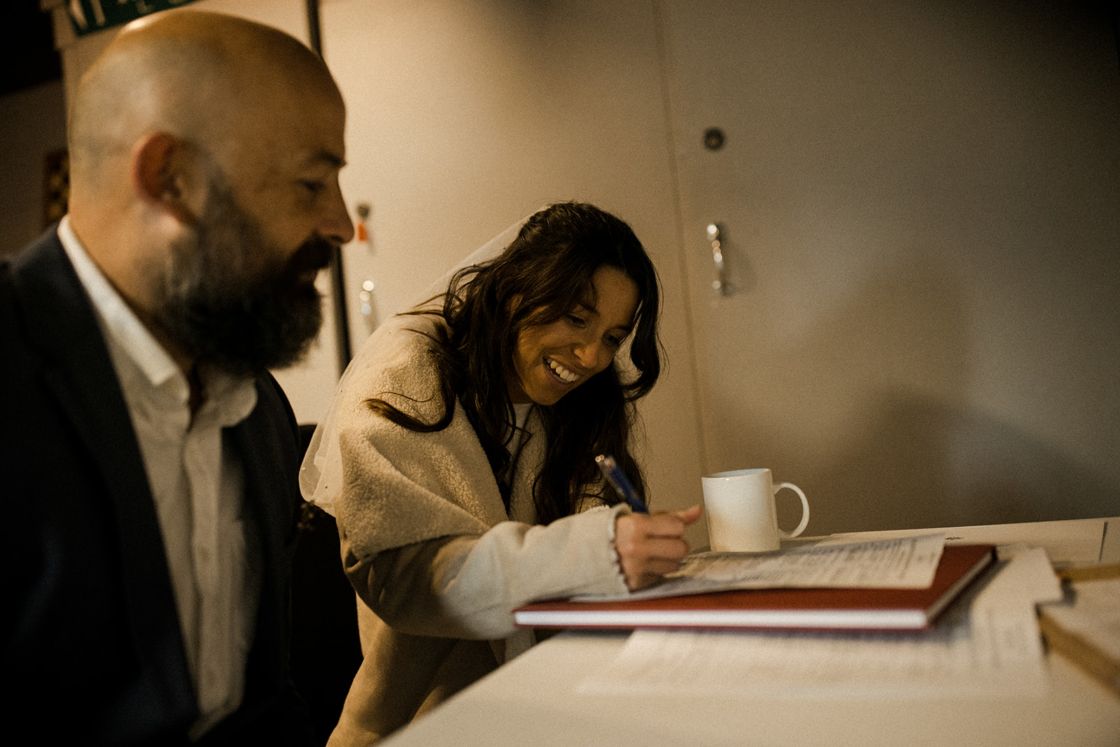