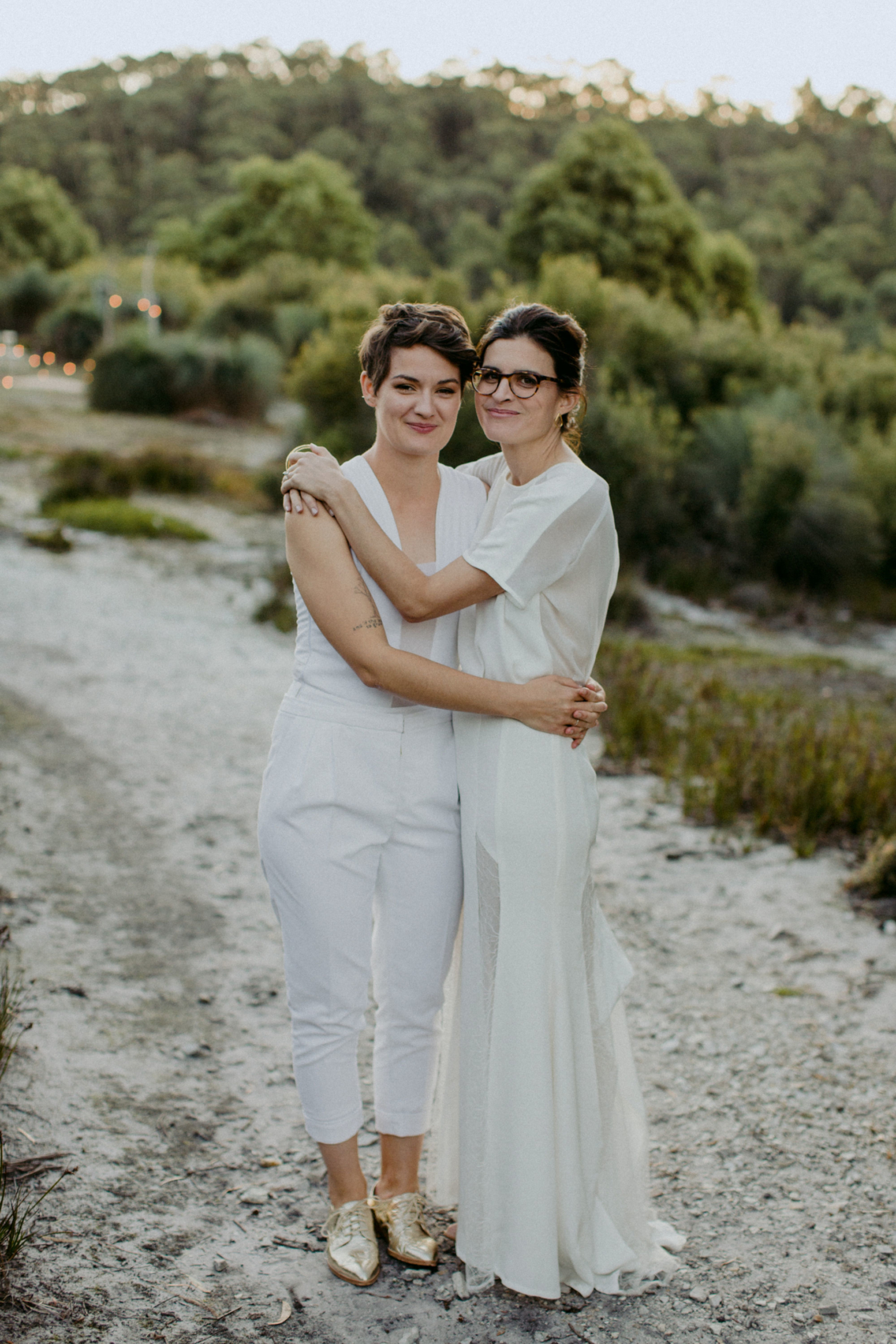 Lovely ladies Erin and Loretta were engaged for two and a half years whilst waiting for the Australian Government to “get their act together” and pass marriage equality so you best believe the pair made up for lost time by organising one heck of a wedfest weekend, yurt and all, to celebrate their long-awaited nuptials. They also had their one-year-old daughter ride down the aisle on a cart that they coined the ‘YAS wagon’ and danced into the reception wearing paper mâché heads of themselves… Intrigued? Of course you are. Scroll down for all the details, their great advice and pics by Amanda Alessi Photography…

LITTLE LOL “We had a heated argument about the size of the noses of the giant paper mâché heads we made and wore for our first dance. Because sometimes when you’re planning a wedding and doing ridiculous wedding craft you lose sight of the bigger picture.”

THE VENUE “We wanted somewhere where people could glamp and getaway from the city for a few days. We never intended on getting married in Tassie (we’re from Melbourne), but when we came across Sandridge Estate it ticked all the boxes. Glamp Village already set up, room for more bell tents, BYO booze and no curfew. After speaking to the amazingly wonderful Bec (part of the family who owns and runs the venue), we were sold. We didn’t even see the property before booking.”

THE INSPO “We wanted the wedding to have a laid back, festival vibe where our friends could have a weekend away to eat, drink and be merry. We had a bunch of bell tents where people stayed, a yurt decked out with golden glittery bunting and a photo booth, a bunch of lawn games including a ping pong table.”

FAVE DETAILS “One of my bridesmaids, Kirby Burgess, surprised us and the rest of the bridal party on the set-up day with overalls that she had designed and made. The girls all arrived on the morning of the set-up wearing them and ready to be put to work. The cake by two of our bridesmaids was an absolute hit. The favours – instead of sending everyone home with bag of nuts or engraved candle, we gave everyone a bingo card and made them compete for a grand prize hamper filled with locally sourced produce. Our close friend who MC’d did an incredible job with hilarious bingo calls throughout the night. Etta’s cart AKA the ‘Yas Wagon’ – our daughter was one when we got married, and in the lead up we were pretty sure she wouldn’t be walking yet (or at least not down an aisle with any sort of reliability). So I made a cart for her to ride down, with the word ‘YAS’ on the front.”

DIY “Pretty much everything was DIY. It was a lot, but it made it ours, and it was fun to do things with friends and family, although my little sister, who made the bulk of the leaf confetti (biodegradable) might disagree. We still look back on the set-up day as almost as much fun as the actual wedding day.’

THE DRESS “I really didn’t know what I wanted to wear and was dreading going into bridal shops. One night I searched for Melbourne dressmakers on Instagram because it felt like at least then I was doing something. I saw a dress that I loved, designed by Georgia Young, and booked an appointment to try it on. I loved Georgia and loved the dress. I (Erin) wore a jumpsuit that was designed and made by my wonder of a best friend/ bridesmaid Kirby Burgess. She’s an actor/singer and makes all her own clothes for red carpet events, and it was really special to wear something she made – we’ve been best friends since high school.”

MEMORABLE MOMENT “It’s a dead heat between two of our mates getting up on stage with the band and surprising us with a rendition of John Farnham’s ‘You’re the Voice’ (Loretta’s favourite wedding song of all time), which resulted in a massive sing/ shout along and entering the shed and doing out first dance wearing our massive paper mâché heads, singing ‘Nothing’s Gonna Stop Us Now.’ We were a little apprehensive about having everyone look at us when we walked in and did our first dance, so we disguised ourselves as ourselves.”

STANDOUT VENDORS “Our celebrant, Hunter Smith, is also our daughter’s dad. He is one of the best guys we know. He not only gave us sperm to make a baby but also worked his arse off to do a celebrancy course so he could marry us. It was so incredible having him there and play such an important part in our day and made us feel really bloody proud of our rainbow family. Also, Bec from Sandridge Estate and Danielle from Hubert and Dan.” 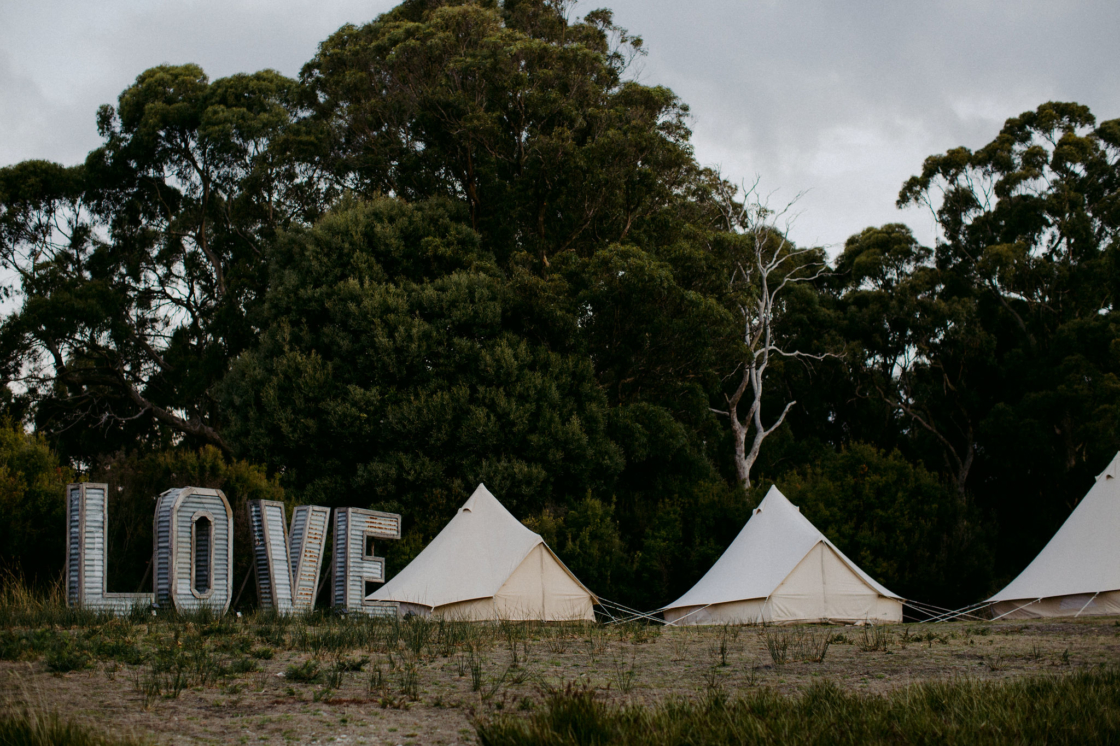 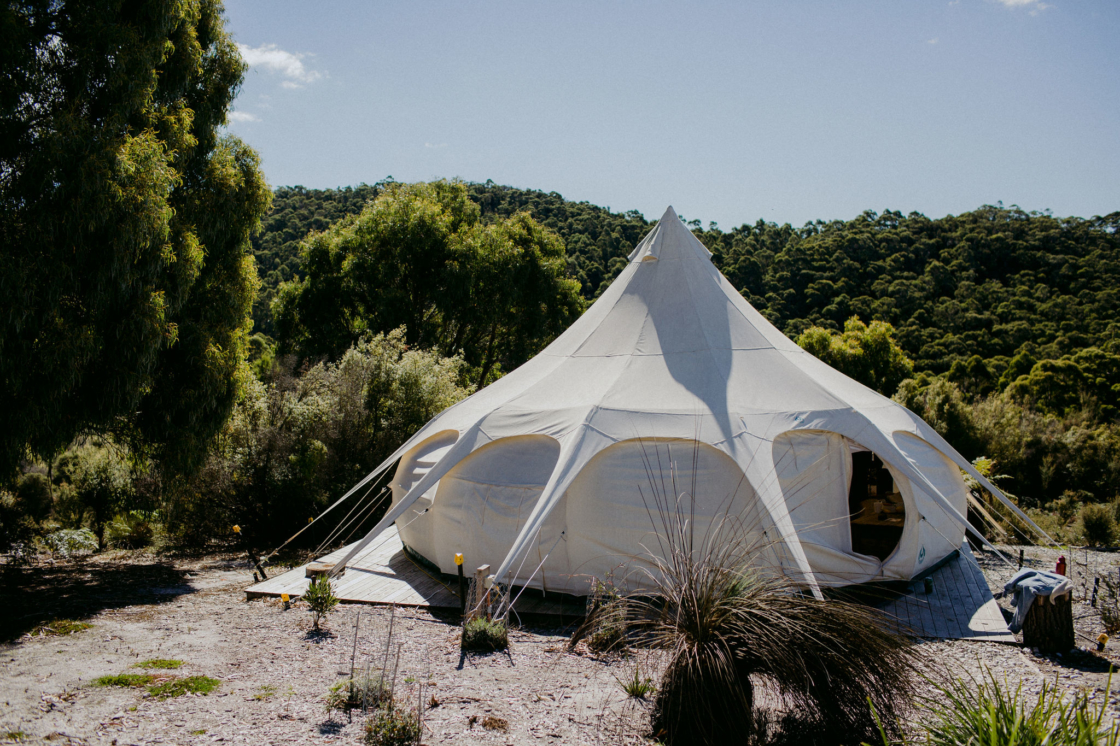 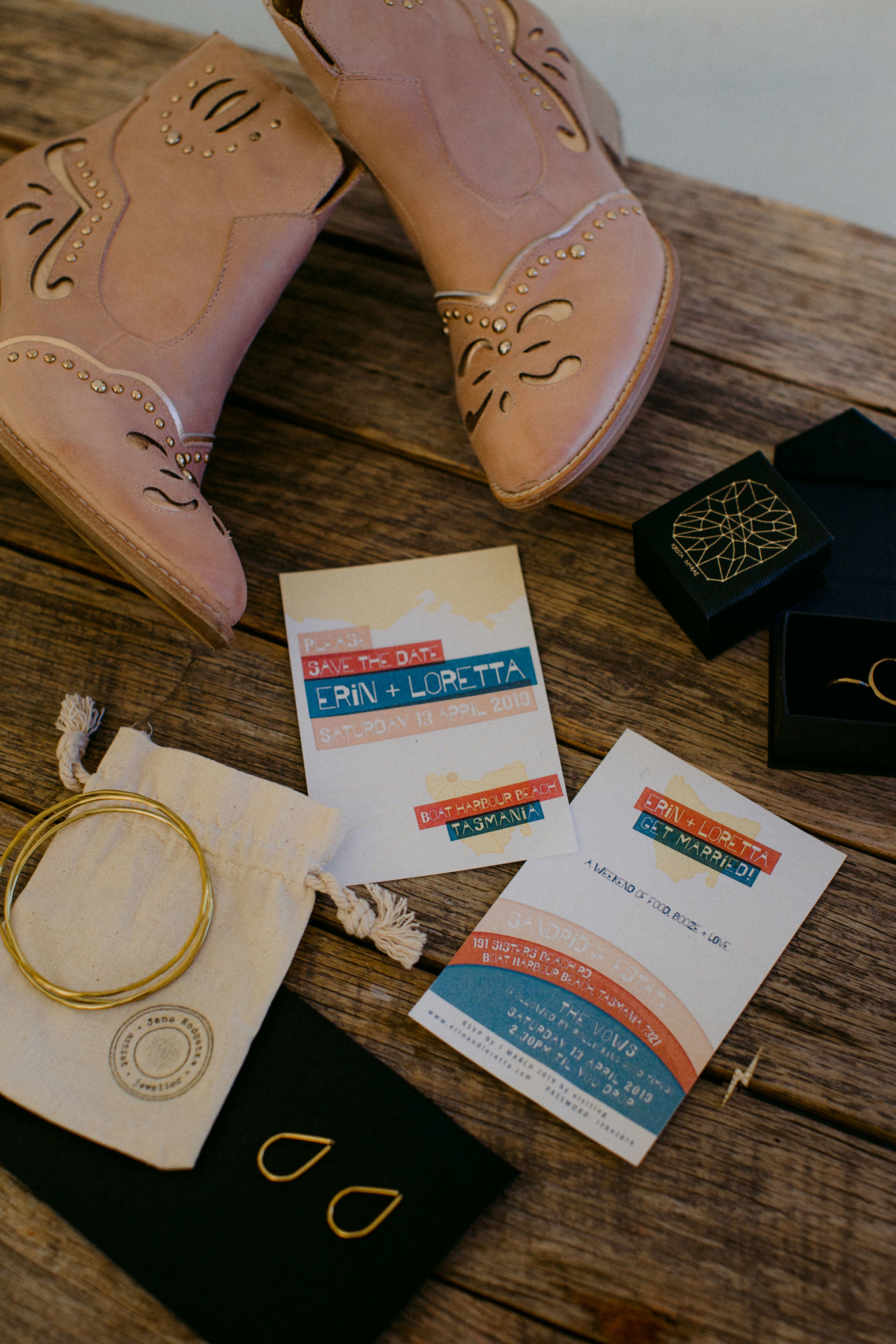 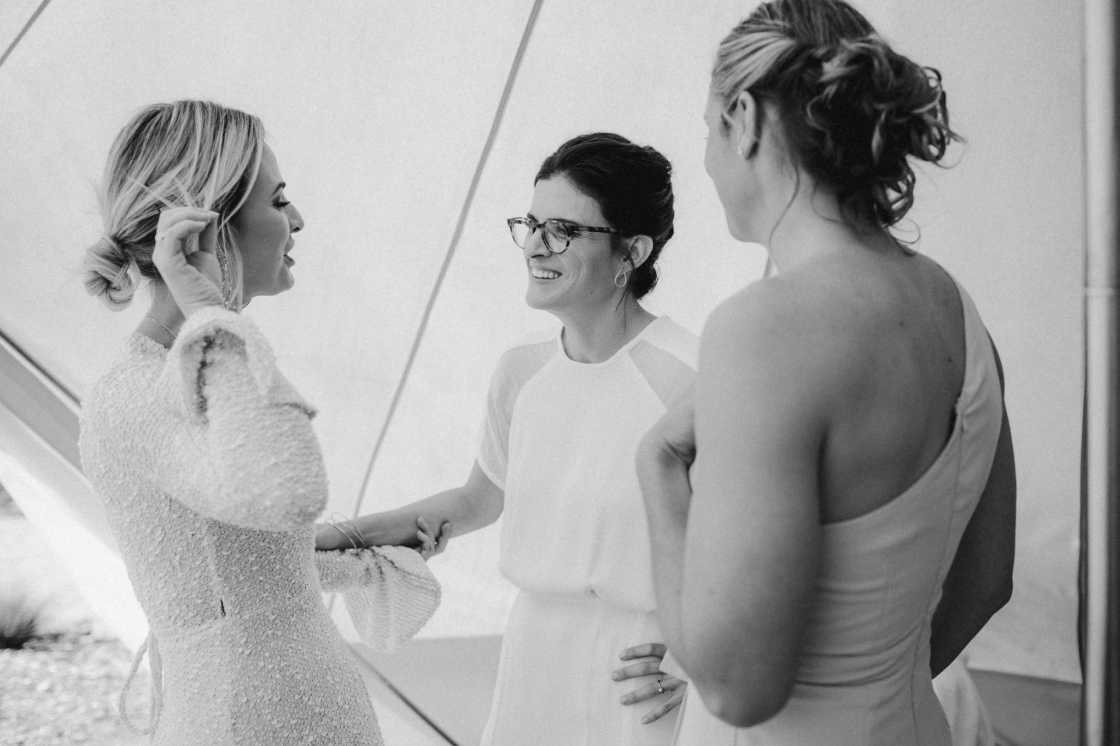 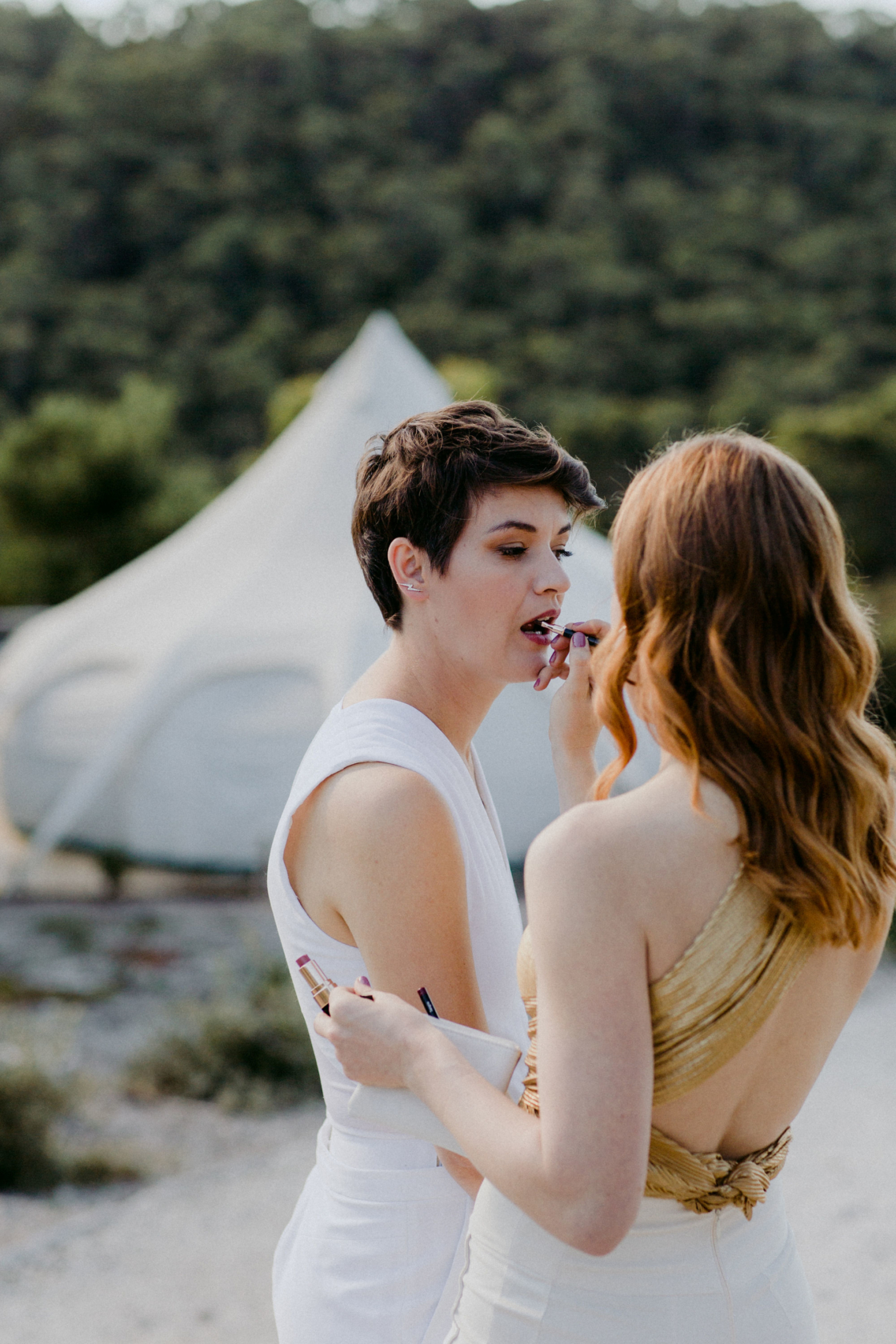 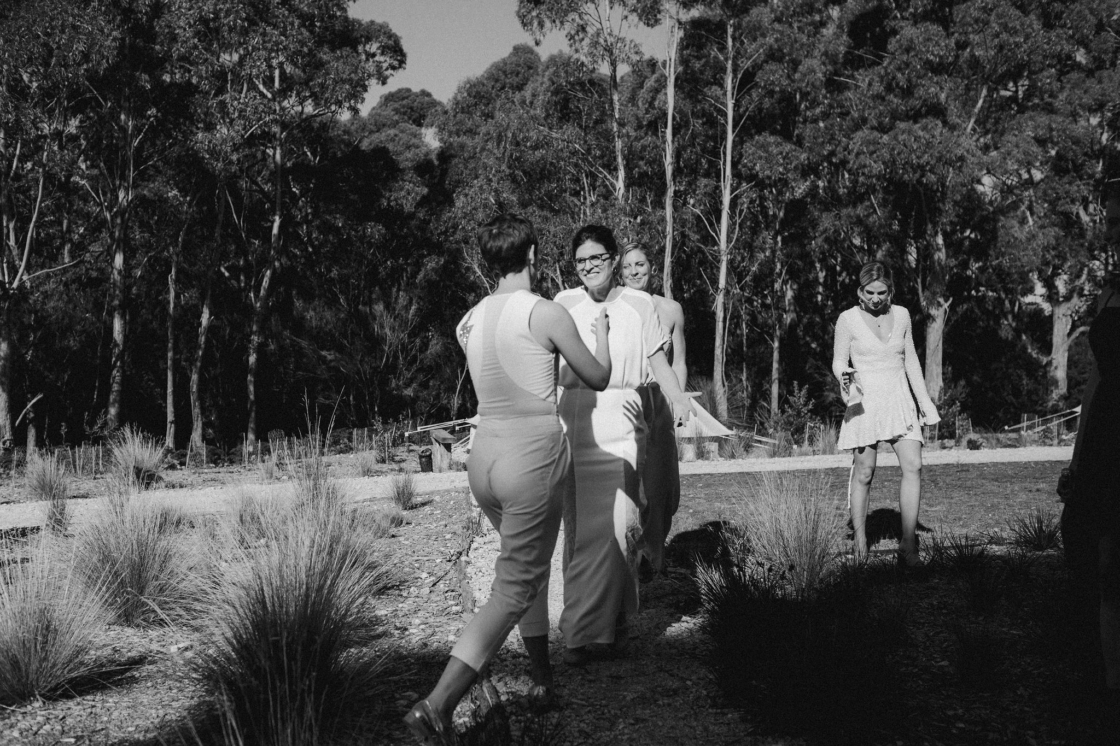 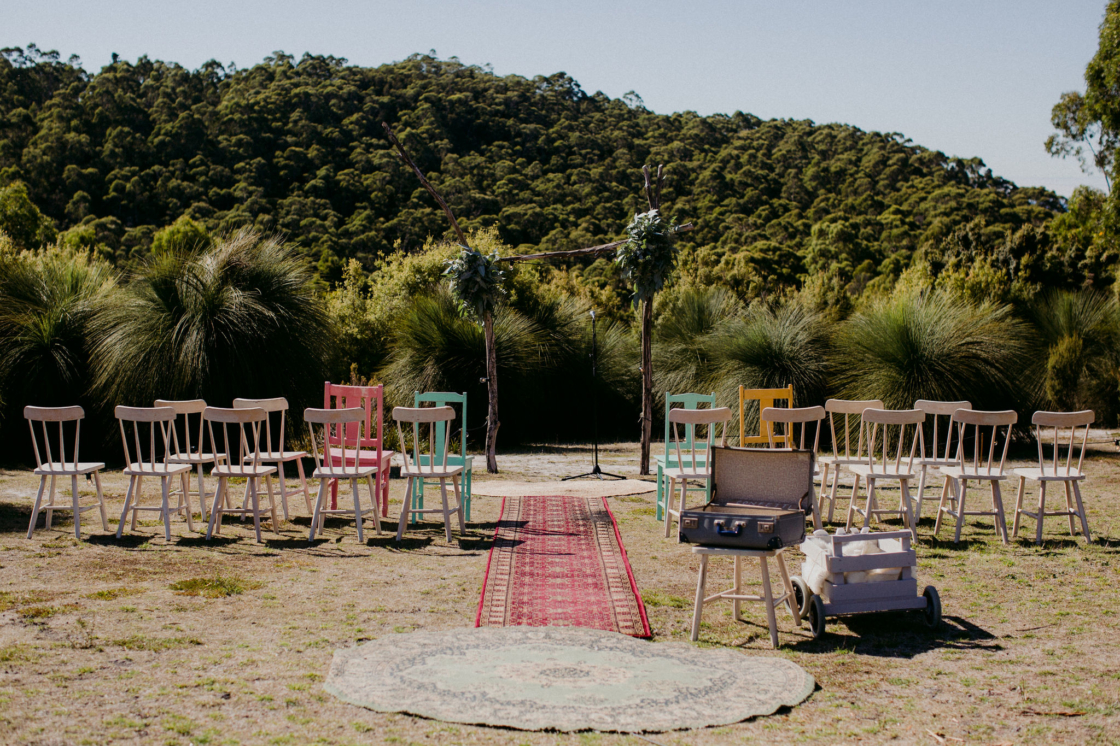 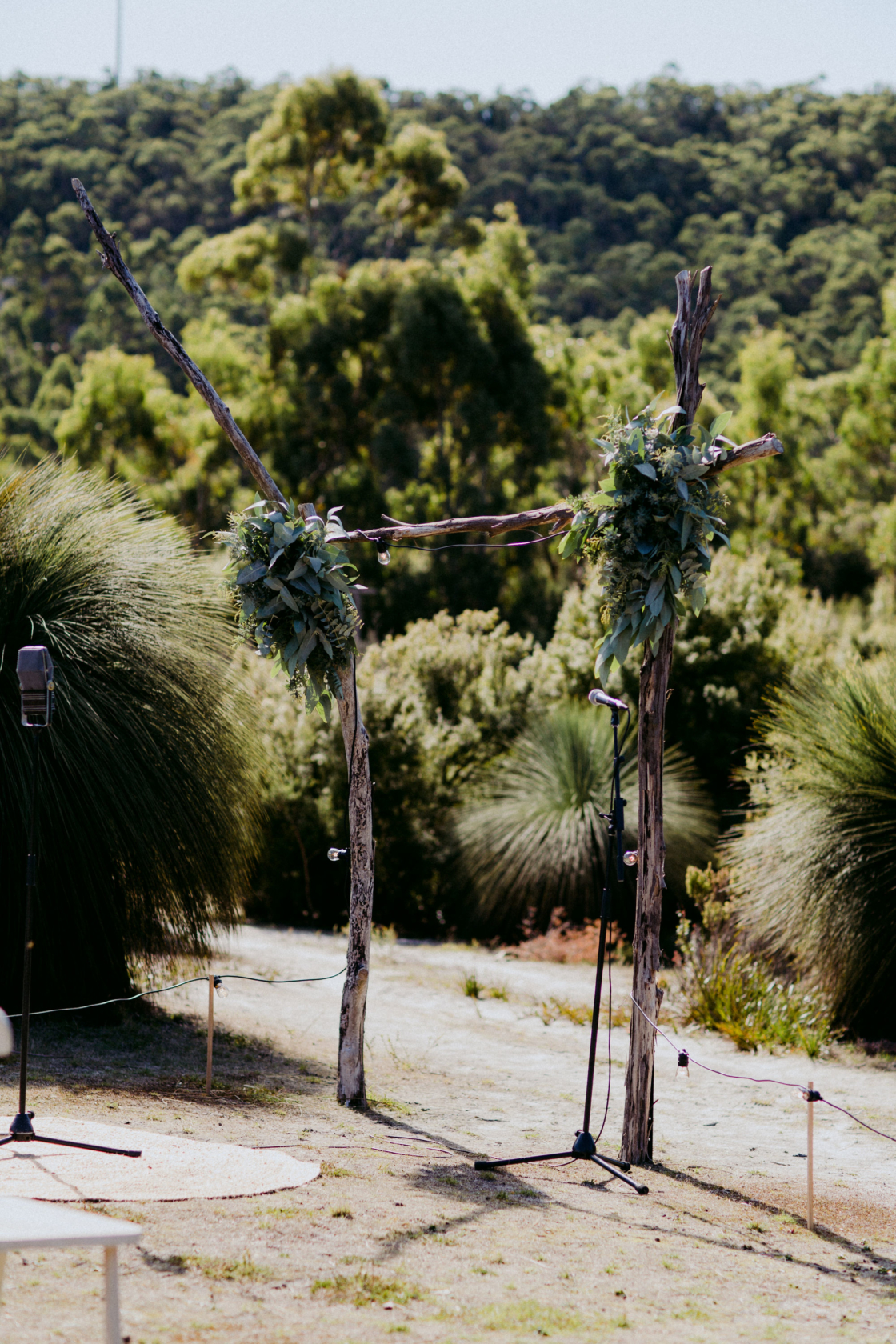 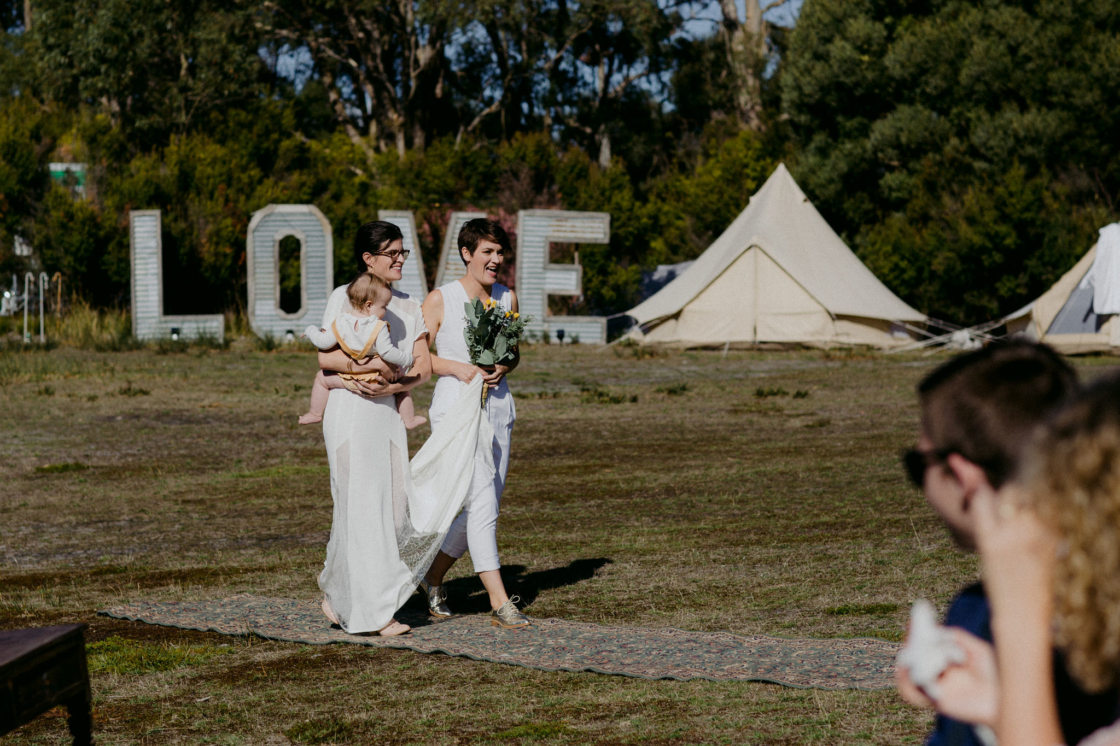 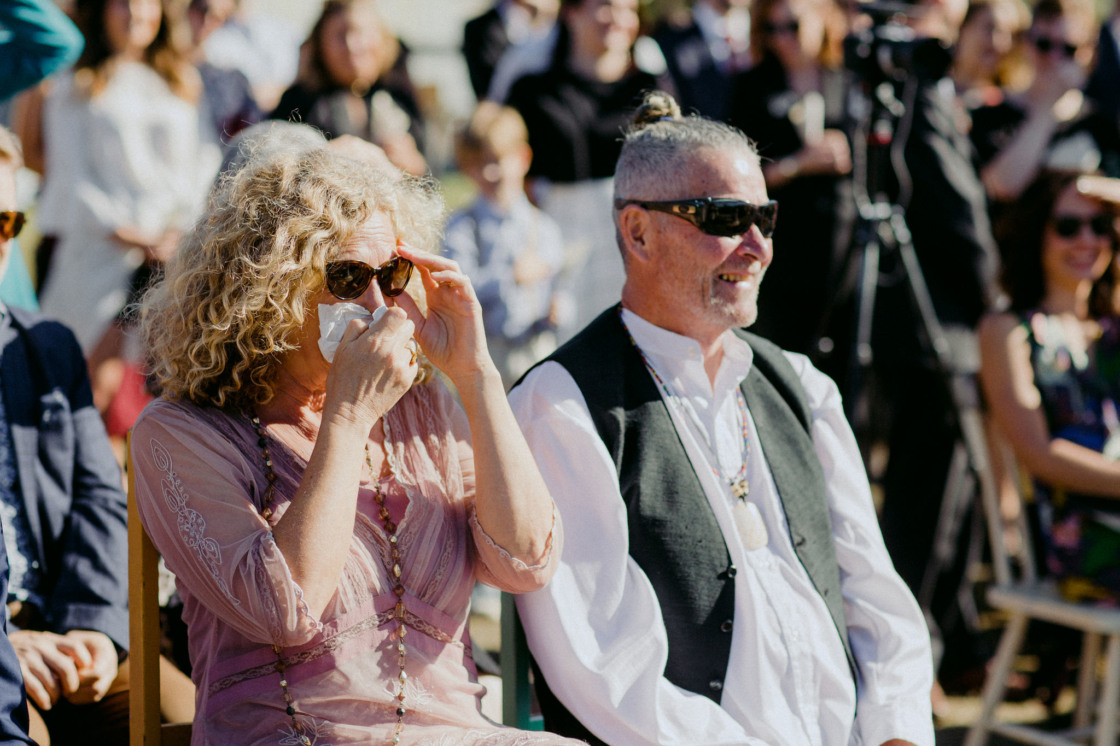 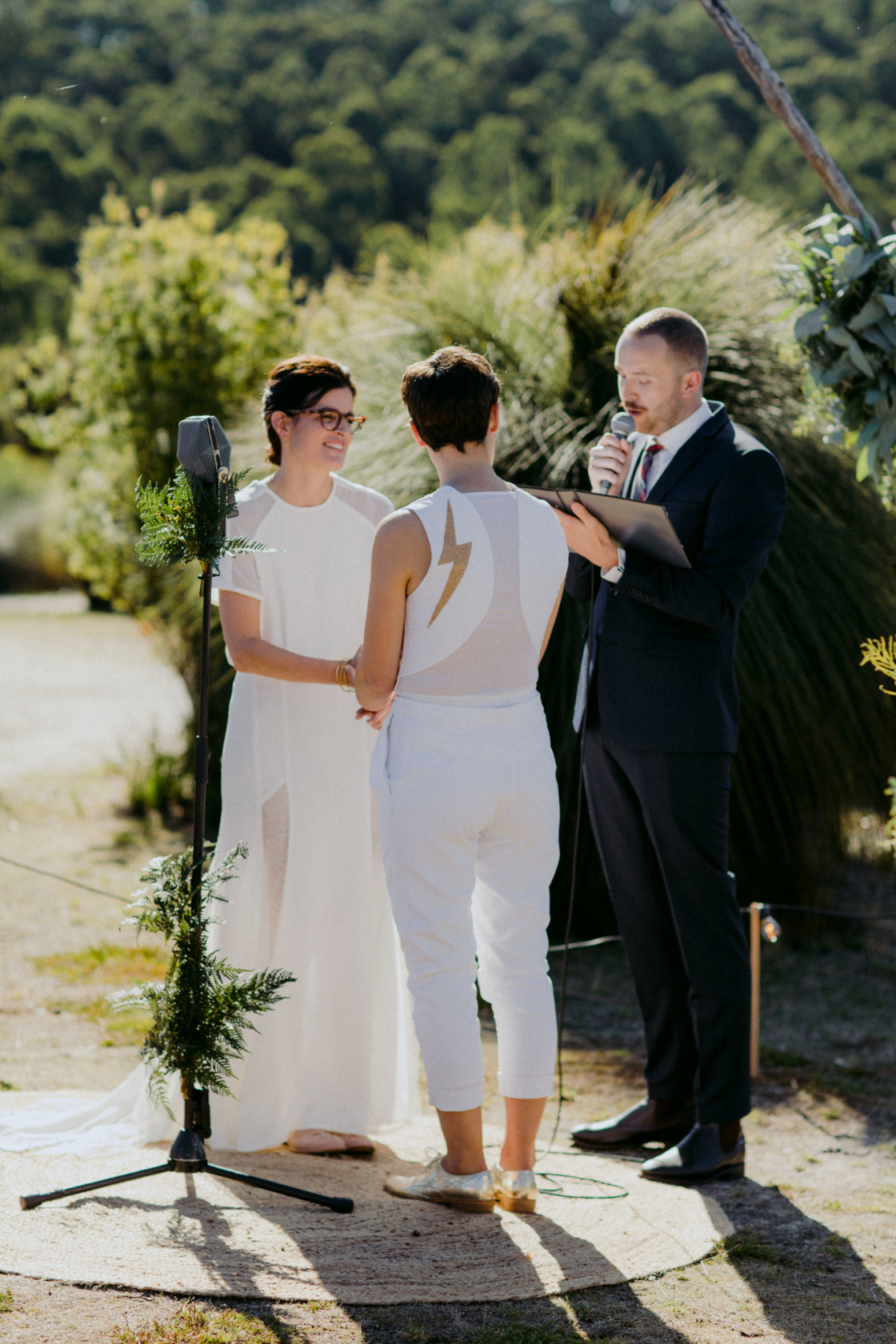 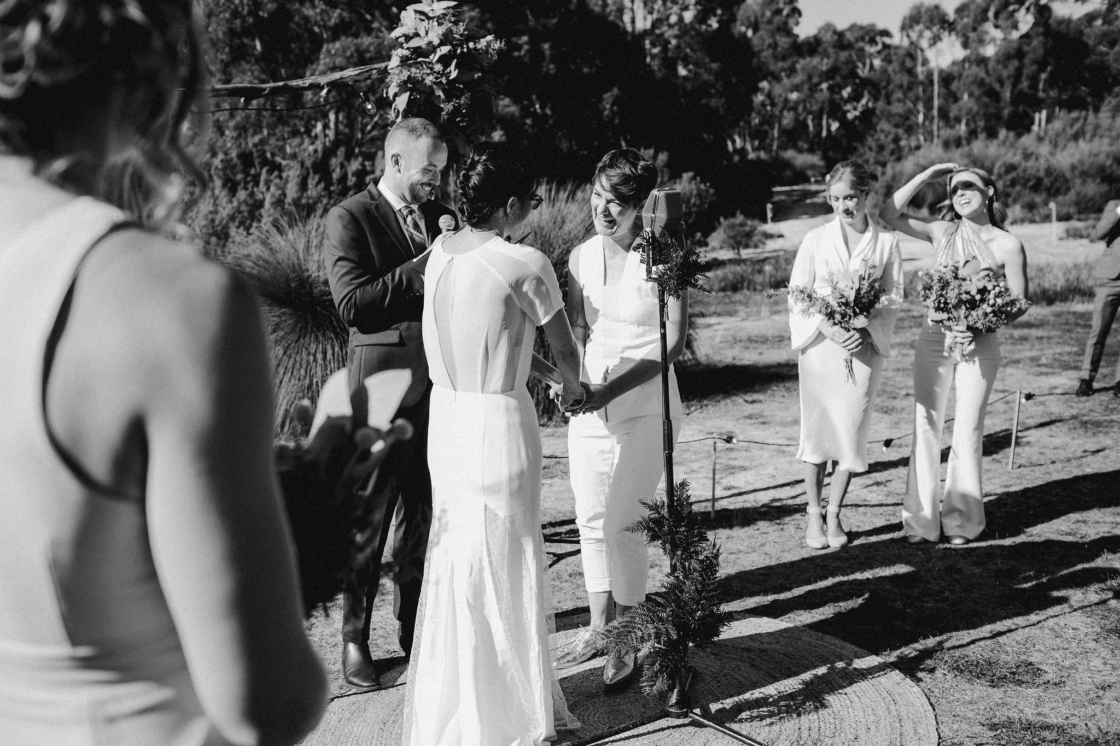 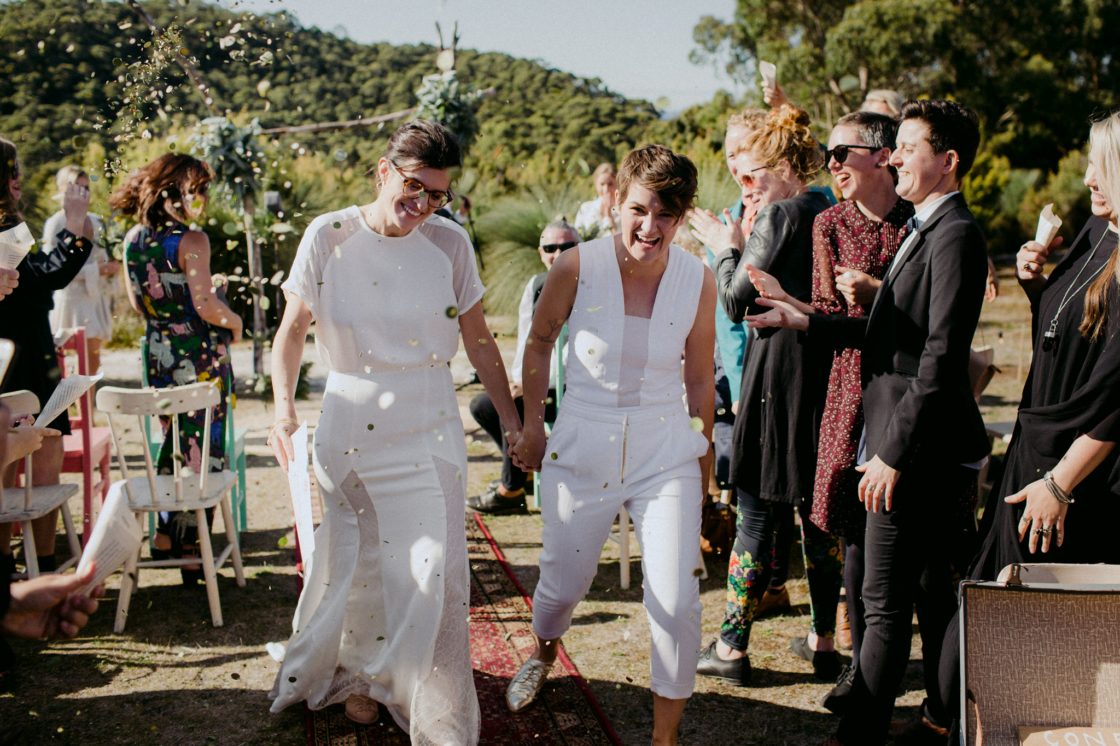 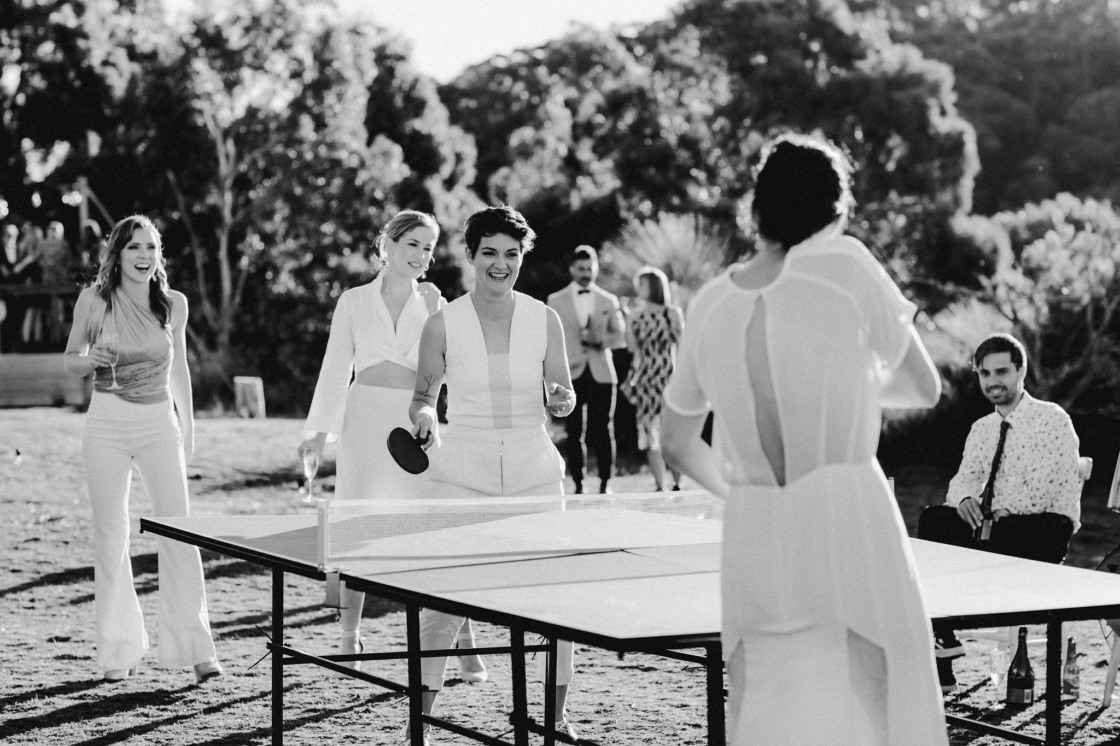 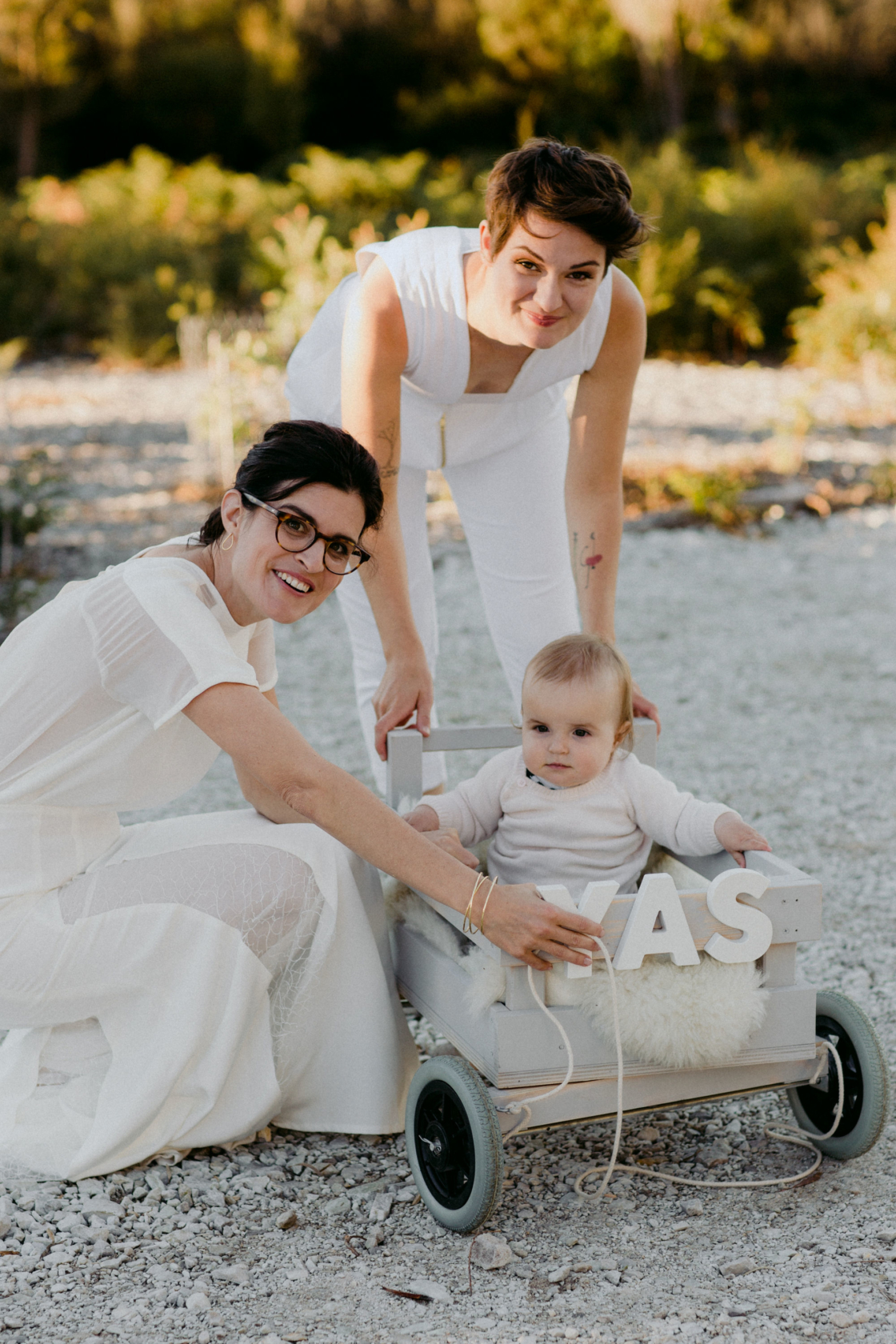 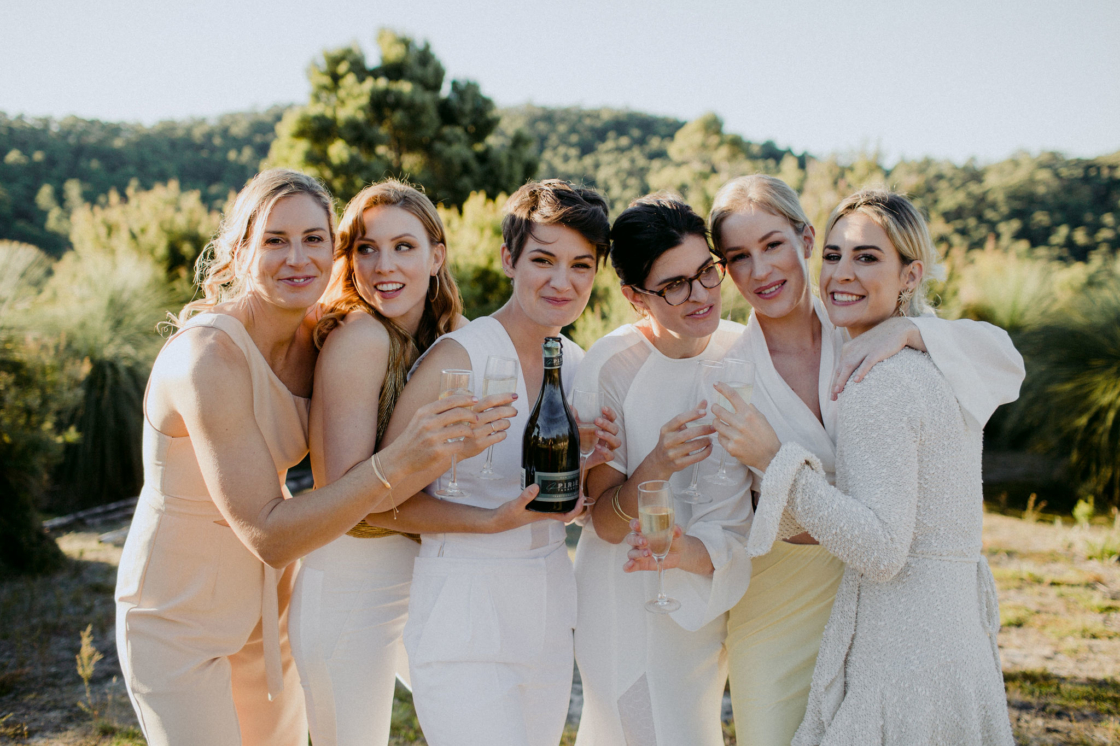 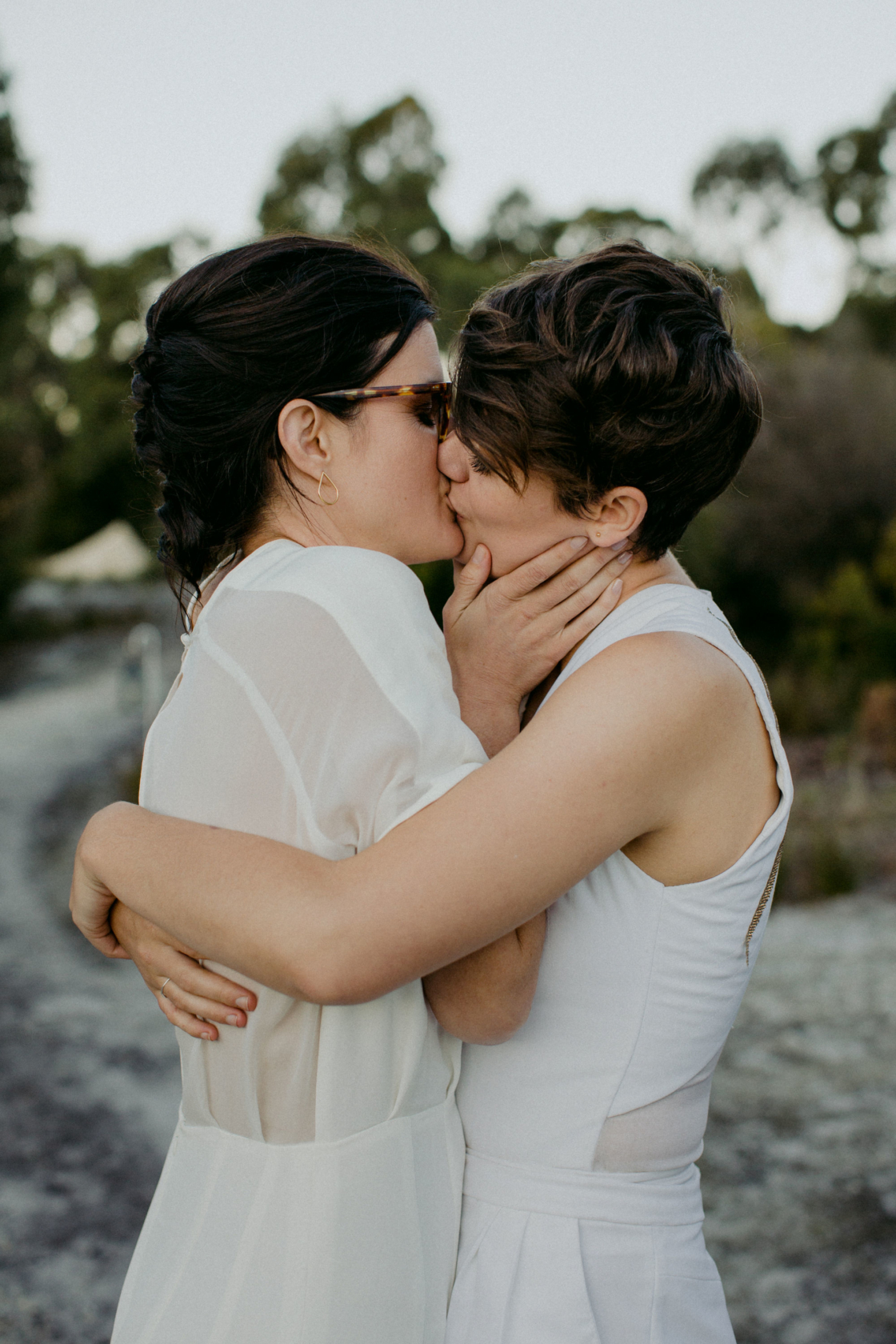 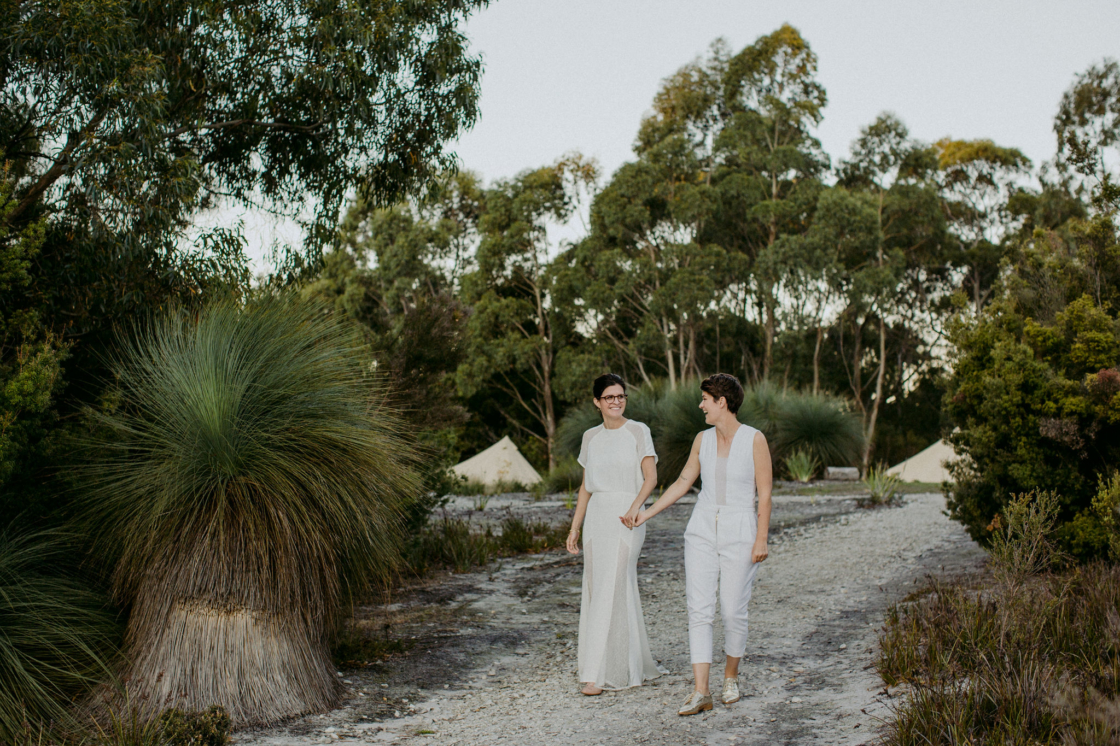 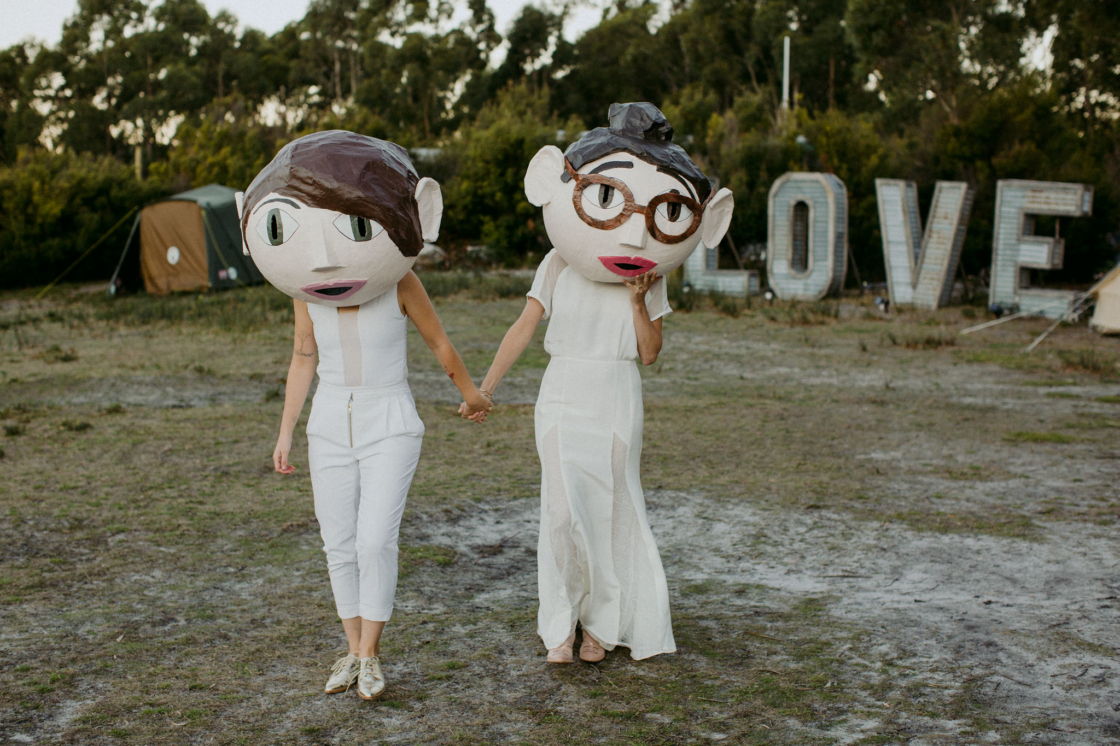 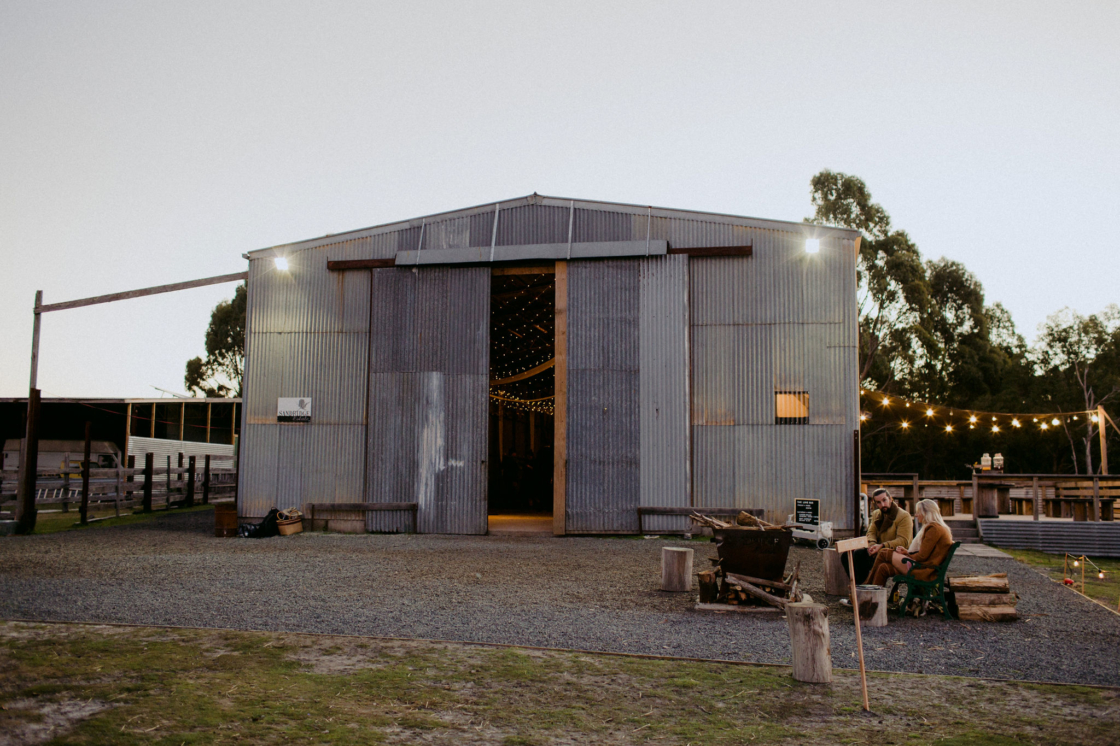 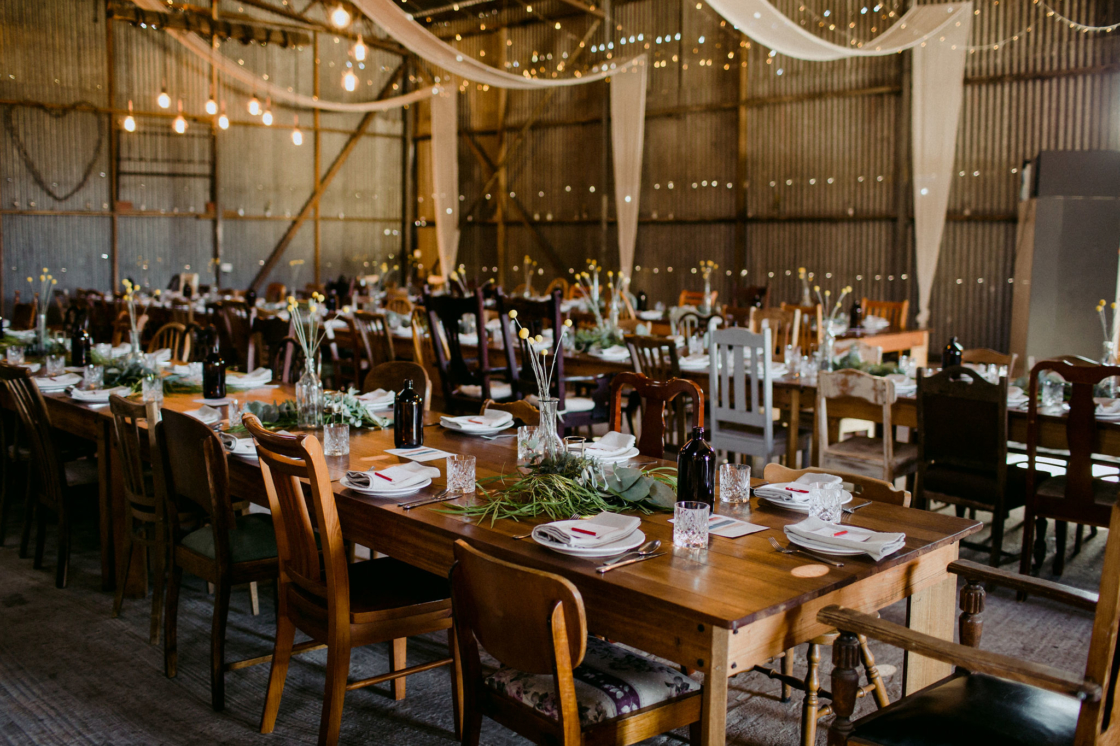 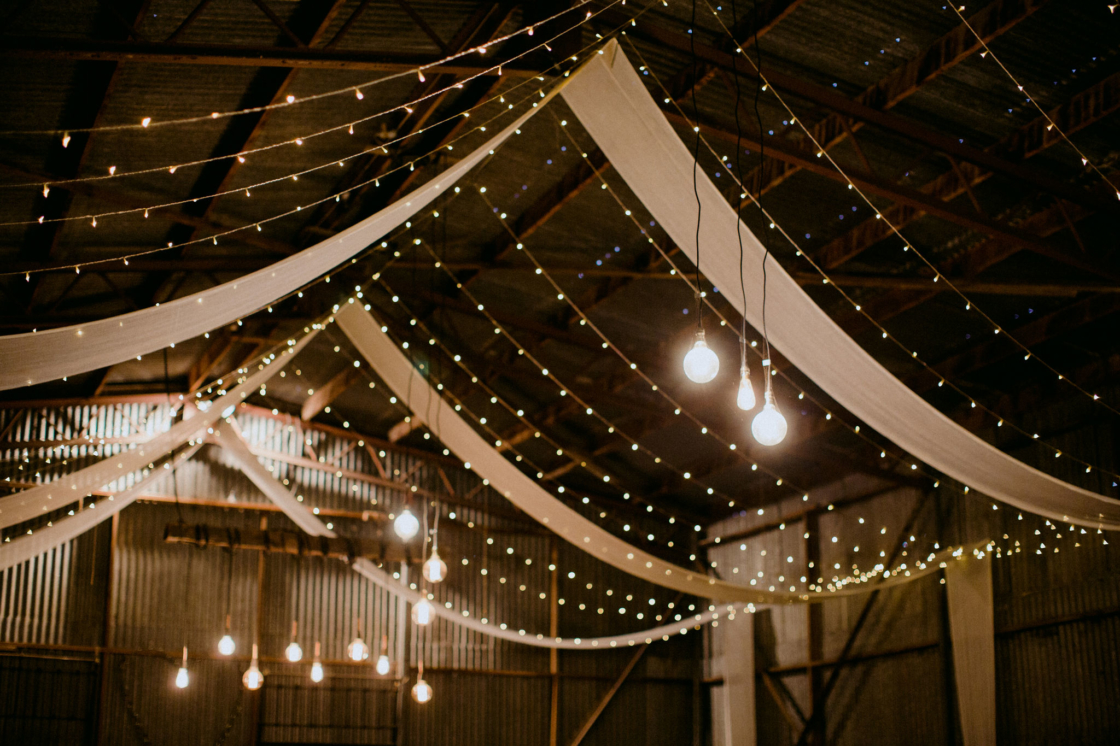 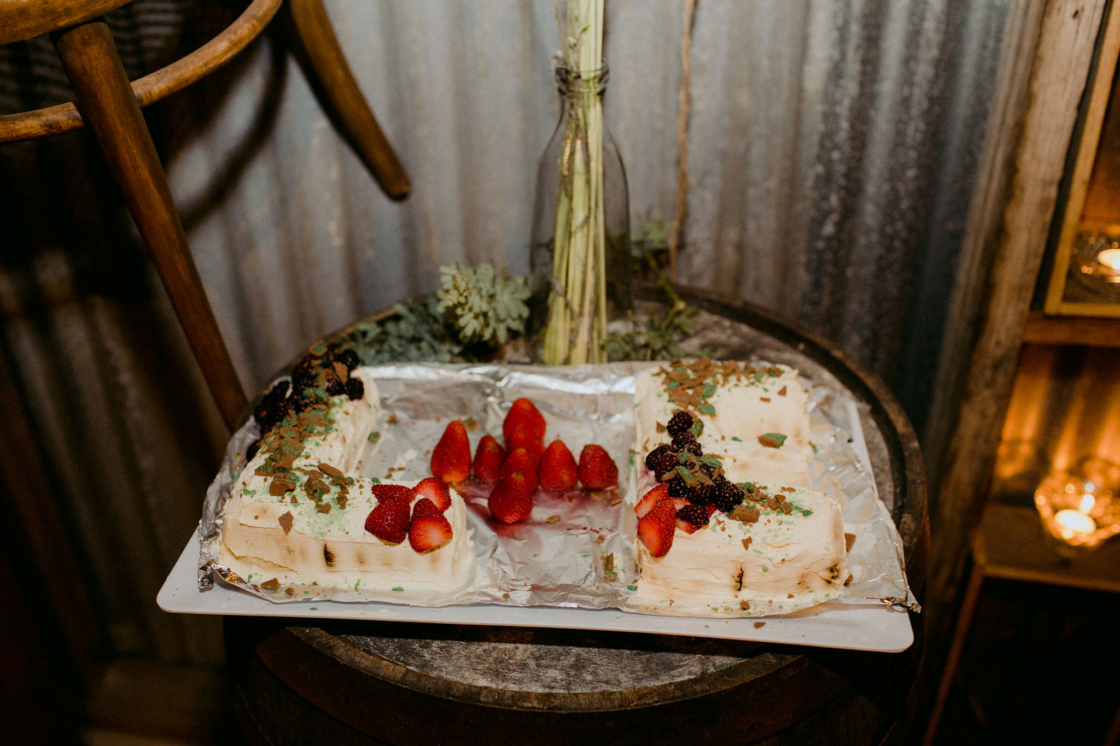 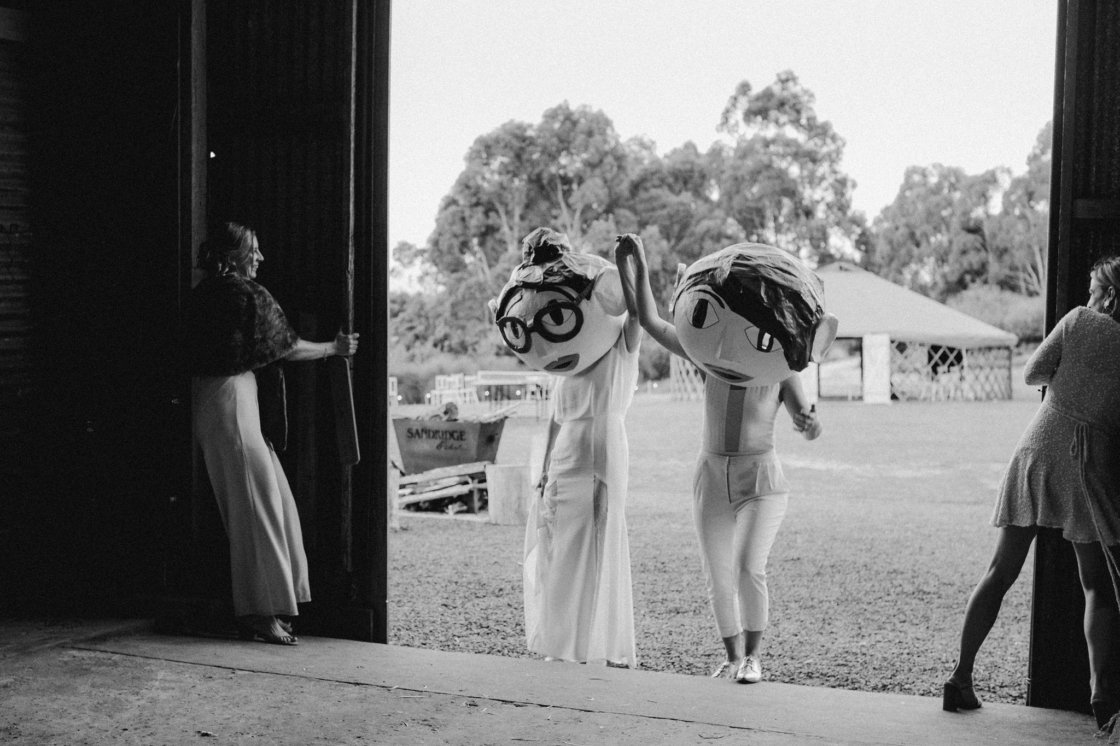 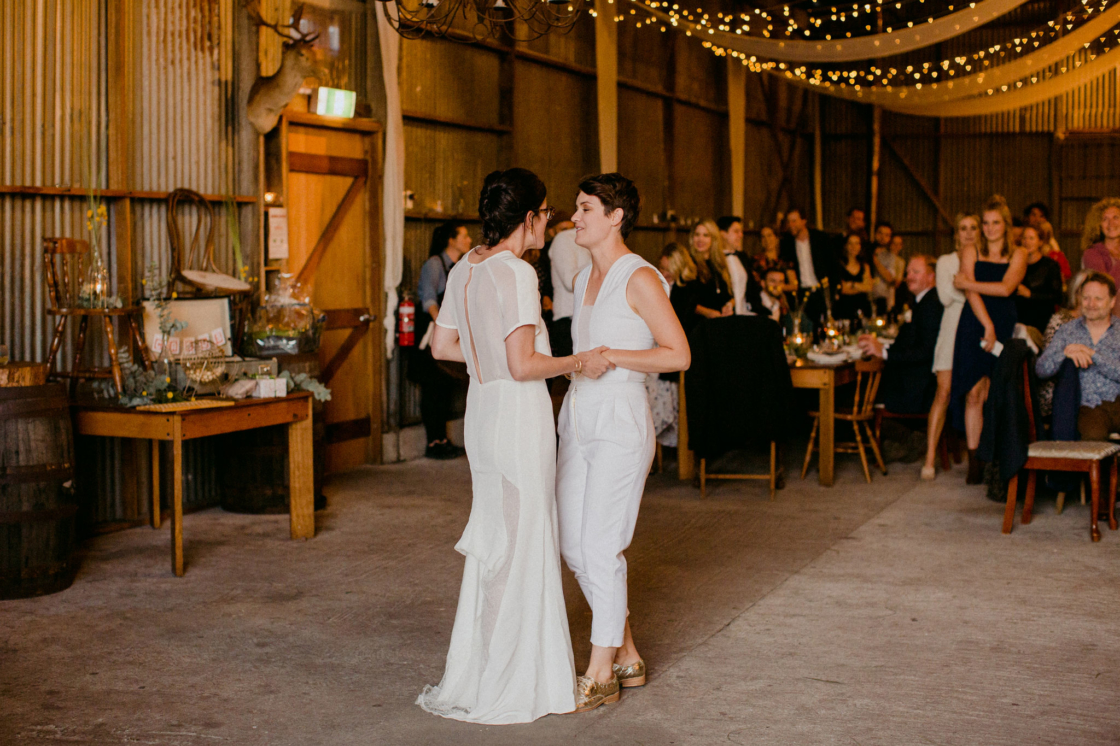 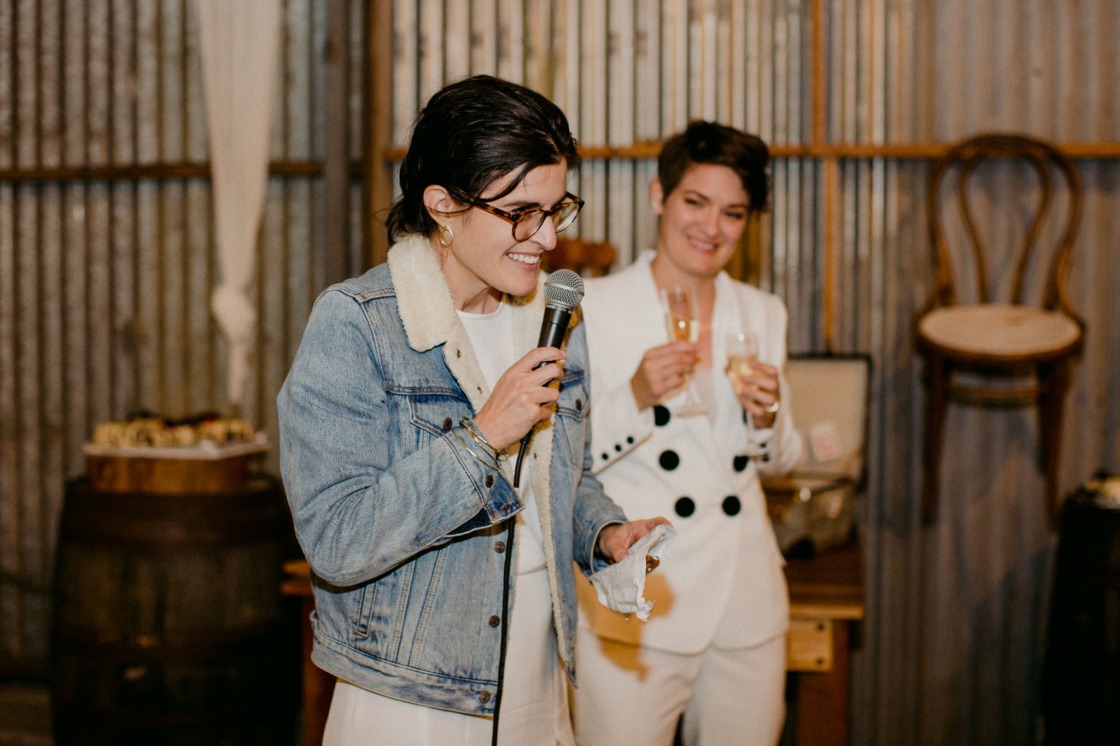 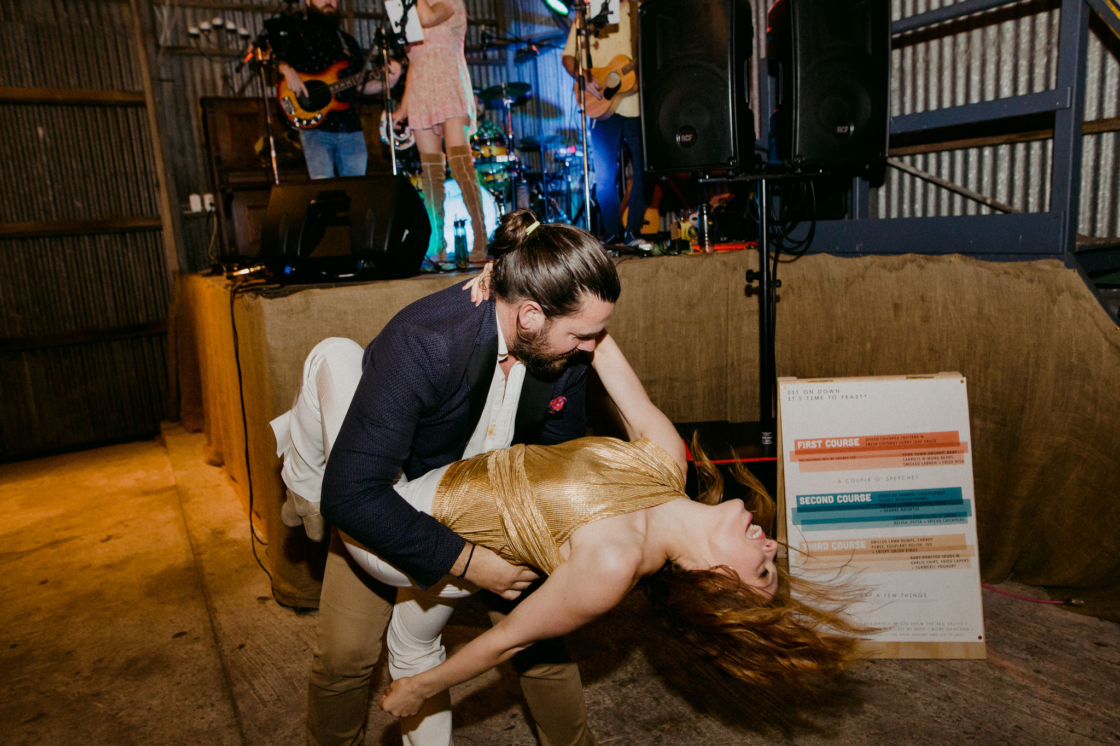 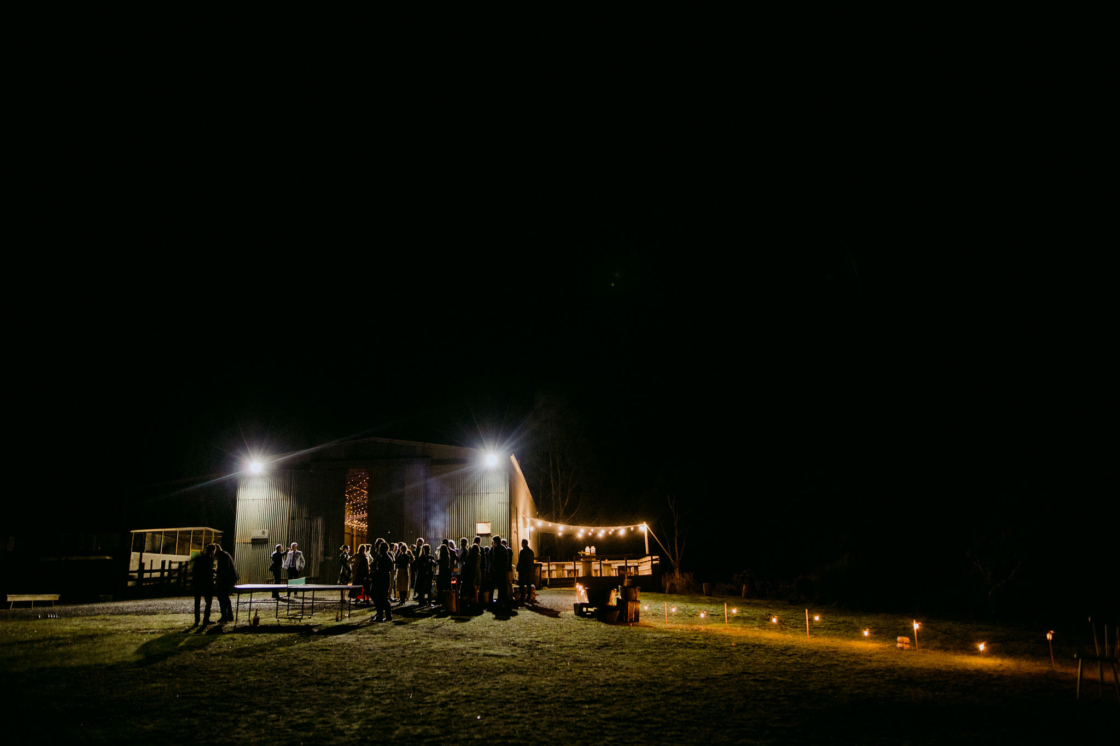