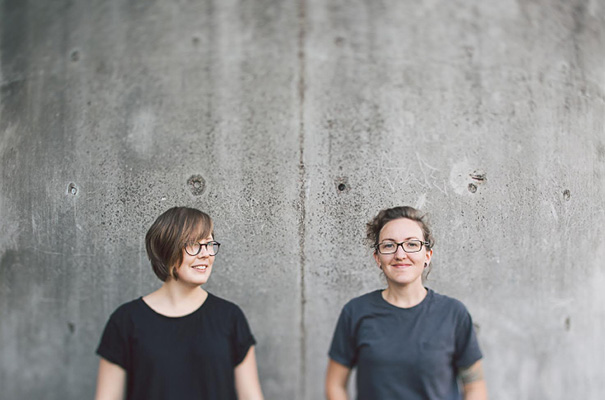 It’s difficult to invest so much time, trust and hard earned money in someone you don’t know, with something so meaningful (like er, your wedding day!) With that in mind our Hello Vendor profiles aim to give you, our dear reader, a chance to meet and connect with the people behind the brand. We’ve introduced you to celebrants, stationery designers, musicians and fashion designers and today we are tickled pink to catch up with cinematographers Brooke and Bree of Light Noise Films.

Tell us a bit about yourself? Brooke: We both grew up near Lake Macquarie, on opposite sides of the water. In late 2007, we met at Newcastle Art School and have pretty much been inseparable ever since. We have one of those strange relationships where we can live, work, socialise, hang out with each other 24/7 and not get sick of each other. Along with making our films, we really love working on any kind of creative project. Whenever we get some spare time, I’m in the studio painting and Bree’s making some form of sculpture. We have a little family of our own, which includes our two pugs, Meg and Rosie, who are incredibly entertaining.

What inspired you to start Light Noise Films? Bree: Before starting Light Noise Films, I worked for a wedding studio. I was pretty much a hamster on a wheel shooting constantly and editing to a formula that the studio required. I was exhausted and lost any kind of creative input. After four years, I finally had enough and quit to begin a little project called Light Noise Films. It was a rebellion against the traditional wedding film and an attempt to make something a little different from what other companies were offering. I had no idea how it would go, but took risks and created films that I’d love to have myself. Only a few weeks in, Brooke quit her job (that she also hated) to join me on this project. It was great to have a pair of fresh eyes around and someone to bounce idea’s off.

Talk us through a typical day? Brooke: A typical day at Light Noise HQ begins with us walking our dogs (or them walking us?) down to our local cafe for a much needed caffeine fix. Once home, the editing begins and really doesn’t end until dinner time (or sometimes later). Editing is the most time consuming part of our job, it makes up probably 80% of our workload. The rest of our time is split between shooting the footage and emails.

Describe your style? Bree: Honest, handheld, documentary, sometimes upbeat and fun, sometimes a little mysterious and always unique. We just try to have fun, stay in the background and let everything happen. Our films are all quite different as we aim to capture the personality of our couples and their day.

What’s your fave spot to shoot and why? Bree: Without sounding cliche, anywhere new. There is nothing better than discovering a place for the first time. It allows you to think differently and be instantly inspired. I love unique places, vast landscapes, mountains and fields. Some spots we’ve really enjoyed shooting at have been an old convict built farm on the east coast of Tasmania, the centre of New South Wales at a family owned pub, secluded beaches, warehouses and private properties.

The best thing about your job? Brooke: Working for ourselves is one of the best things about our job. We work a lot (most people would say probably too much. We’re working on that), but being able to work for ourselves and create films that we are proud of makes it worth while. Being able to attend and witness, time after time, the happiest moment of peoples lives, is amazing. It’s a pretty wonderful feeling when we can capture all of that, and hear how happy it makes our couples.

Do you have a favourite wedding that you’ve shot? Brooke: I’m not sure I could say we have a favourite as every wedding has different components, a new story and new scenery. We’ve been incredibly lucky and have had the chance to film many awesome weddings.

Any advice for couples on the fence about hiring a cinematographer? Brooke: It’s a 100% personal decision. Cinematography can offer you a totally different perspective of the day. We often get told that we’ve captured the parts of the day couples either didn’t know happened, or forgot. Wedding days fly past pretty fast, everyone gets told that, but having another perspective you can look back on after its all done, to show family, friends or children down the track, is what we are all about.

What do you say to couples who are shy in front of the lens? Bree: We don’t give out any awkward directing or rules, instead we just have casual conversations to try and take their mind off the fact that cameras are around. The best footage happens when people are relaxed and comfortable just chilling and being themselves. Generally on a wedding day, couples are so taken by the day as a whole with so many different things happening, that they don’t even realise we’re around filming. We get so many comments at the end of the night from couples saying they didn’t even realise we were there. That’s the goal I guess, be a little invisible so that they can be themselves and not worry about the camera.

How early do engaged couples need to book? Generally 12 months in advance is a good time to get in contact. Although get in touch with us anytime to see if we have your date available.

What are you doing when you’re not making films? When we’re not out shooting or in the office editing, you’d probably find St Vincent or Talking heads blaring through the house, and us in our art studio, pottering in the backyard gardening, or chilling with the pugs. We really enjoy being in nature, be it a bush walk or camping. Anywhere away from computers, iPhones and social media. (Just for a little while)

It looks like you guys get around – do you travel for work often? Bree: We travel all the time. Being based in Newcastle means we’re on the freeway many weekends heading to Sydney or the Southern Highlands. We love any chance to travel further, and have filmed weddings interstate and internationally too, we’ve just arrived home from a job in America.

We love The States! How has the gay community in Australia responded to the U.S Supreme Courts decision to legalise gay marriage? Bree: It has been an incredibly positive and celebratory response. I think everyone is hoping that it’ll put more pressure on the Australian government to legalise same-sex marriage, or as we like to call it, £marriage. Personally, every time I saw an article about it that day I welled up with tears.

To check out some of their work have a good squiz at the videos below and then click here.