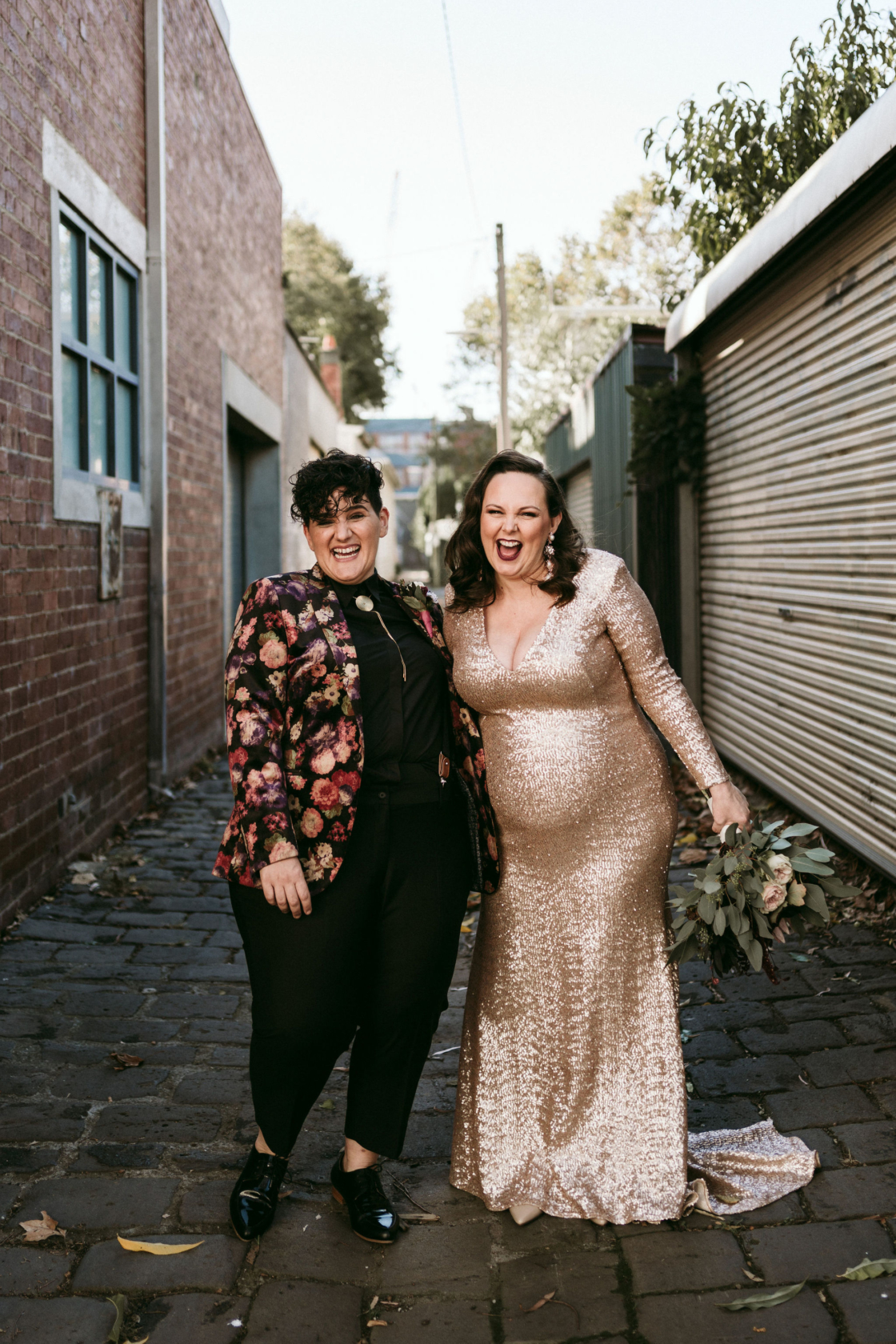 After Jade said a big “yes!” to Elleni’s dreamy proposal, these brides didn’t waste any time in making things official. “Our engagement was only four months!” Jade tells us. “With a baby on the way we decided we wanted to get married before the baby arrived.” The pair said ‘I do’ a day before their four-year anniversary in a glam New York-inspired setting, in front of 103 family and friends, and it was the day of their dreams down to the letter. Elleni tells us, “Looking over the room when everyone was in it and everything was set up was an amazing feeling.”

Ready to take a scroll? Let’s do it. (Psst – while you’re busy enjoying all of the phenom pics by friend of Hello May Gold and Grit, make sure you pause for a hot minute when you hit the cake shots, because this is one  bloody epic dessert, created by none other than Miss Ladybird Cakes. It’s seriously something else.)

THE PROPOSAL “I [Elleni] took Jade out to her favourite local Italian restaurant for dinner and when we got home our apartment was lit by over 100 candles (courtesy of our good friends who snuck in while we were out to set up for me). In the middle of the coffee table sat a gorgeous cake by Miss Trixie Drinks Tea that said ‘Wife Me?’ on it. While Jade looked at the cake, I dropped to one knee and pulled out a plain gold band that I used as a temporary ring to propose. Jade had been wanting one of Miss Trixie Drinks Tea’s cakes for so long and Miss Trixie helped me plan the surprise.”

THE VENUE “Previously we had discussed eloping to New York but with the pandemic that became impossible. So when we went for a visit to Panama Dining Room and Bar and saw those amazing windows we were reminded of a New York loft. Also the food at Panama is amazing and it was important to us that our guests were provided with great quality food.”

THE VIBE “We wanted there to be a good mix of sentimentality along with lots of fun. For most of our guests it was their first wedding with two brides and we wanted to make it really personal and honour the journey that the LGBTQI+ community had been on that allowed us to be able to get married at all.”

TALK ABOUT TRADITION “We wanted to keep the traditions that were important to us and leave the things that weren’t. I [Elleni] had my parents walk me down the aisle. Jade, as an independent woman, had her parents and their partners walk down the aisle before her and she walked herself down the aisle.”

THE DRESS “Nicole at Nicolangela made my [Jade] dress. I had seen the gold sequinned dress on her website a couple of years beforehand and thought if I ever got married, I wanted to wear that dress. Within a day or two of Elleni proposing I contacted Nicole to ask about the dress and see if it was possible to have it customised. I wanted a closed back and I also needed it to have space for my growing baby bump. Nicole was so wonderful to work with, she understood exactly what I wanted. She was professional but it felt like I was working with a friend. There were no delays and the dress was exactly what I wanted. I cried the first time I put it on so I knew I had found my dress.”

MEMORABLE MOMENT “Seeing Elleni at the end of the aisle absolutely losing it, so many tears – and while many of them were the overwhelming emotions of us getting married, Elleni had just been walked down the aisle by her parents, something she thought would never happen as they have not always been okay with her sexuality. I knew that in that moment she felt acceptance and the love of her parents. The day was so special not just because we were each marrying our person, but also because all of our favourite people were there to love and support us. Add to this that after three years of IVF we finally had our baby on board, we couldn’t have wanted for anything else.”

CUTE CUSTOM “Elleni is Greek Cypriot so there was Greek dancing and the traditional money dance, where the couple dance and guests pin money to the couple. I [Jade] named my dress Betty after Elleni’s grandmother, who has now passed, and included a little nod to her by tucking a special piece of cloth in to my bra to have her with me on the day. I also wore a special family heirloom ring.”

WE’RE GLAD WE… “We knew we wanted to include in our ceremony an Acknowledgement of Country – that the land on which we were marrying, the land on which we live and work always has been and always will be Aboriginal land. Our celebrant, Precious Celebrations, had previously paid for a consultation with local Aboriginal elders to ensure that the Acknowledgement of Country was culturally appropriate and sensitive. We also included a brief history of LGBTQI+ rights in Australia. We wanted to acknowledge what it had taken our LGBTQI+ elders to be able to be in the position of us being able to marry that day. We understand that that kind of ceremony isn’t for everyone but it was definitely important to us.”

STANDOUT VENDORS “All of our vendors were amazing. It helped that we are friends with some of our vendors (they were all still paid though). The legendary Stina from Gold and Grit is a friend so having her take our photos was a no-brainer. Of course, after the ceremony we asked that she sit down and join the festivities as a guest. Our celebrant Precious, from Precious Celebrations, was extraordinary. She understood exactly what we wanted and was super supportive. She even surprised us by having some of our friends and family read out things we had said we loved about each other during the ceremony. Our DJ, Rich Moffat, played all our favourite songs and although we had not discussed it, he brought lights for the dance floor. He really knew how to read the room and we all had so much fun on the dance floor.”

If you’re still piecing together your ultimate team of vendors, and you’re feeling inspired by Jade and Elleni’s picks (and who wouldn’t be?), head over to our directory and visit the listings for Gold and Grit, Miss Ladybird Cakes and Kate McCleary Hair & Makeup Artist to get in touch with this powerhouse crew. 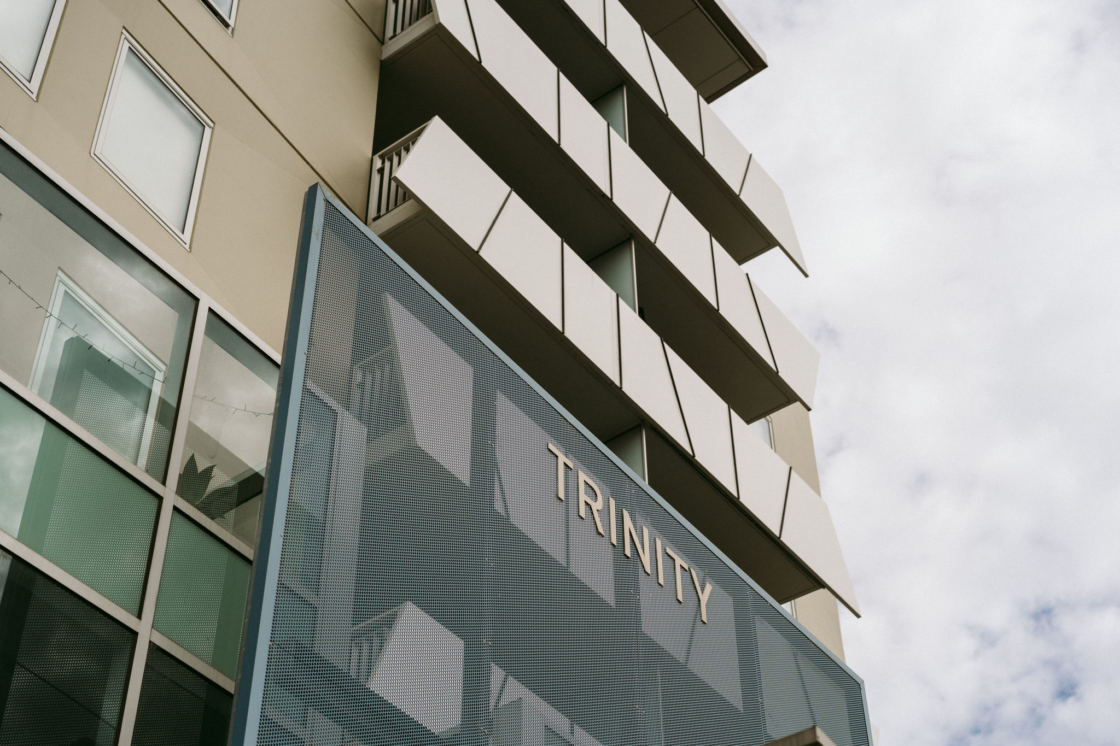 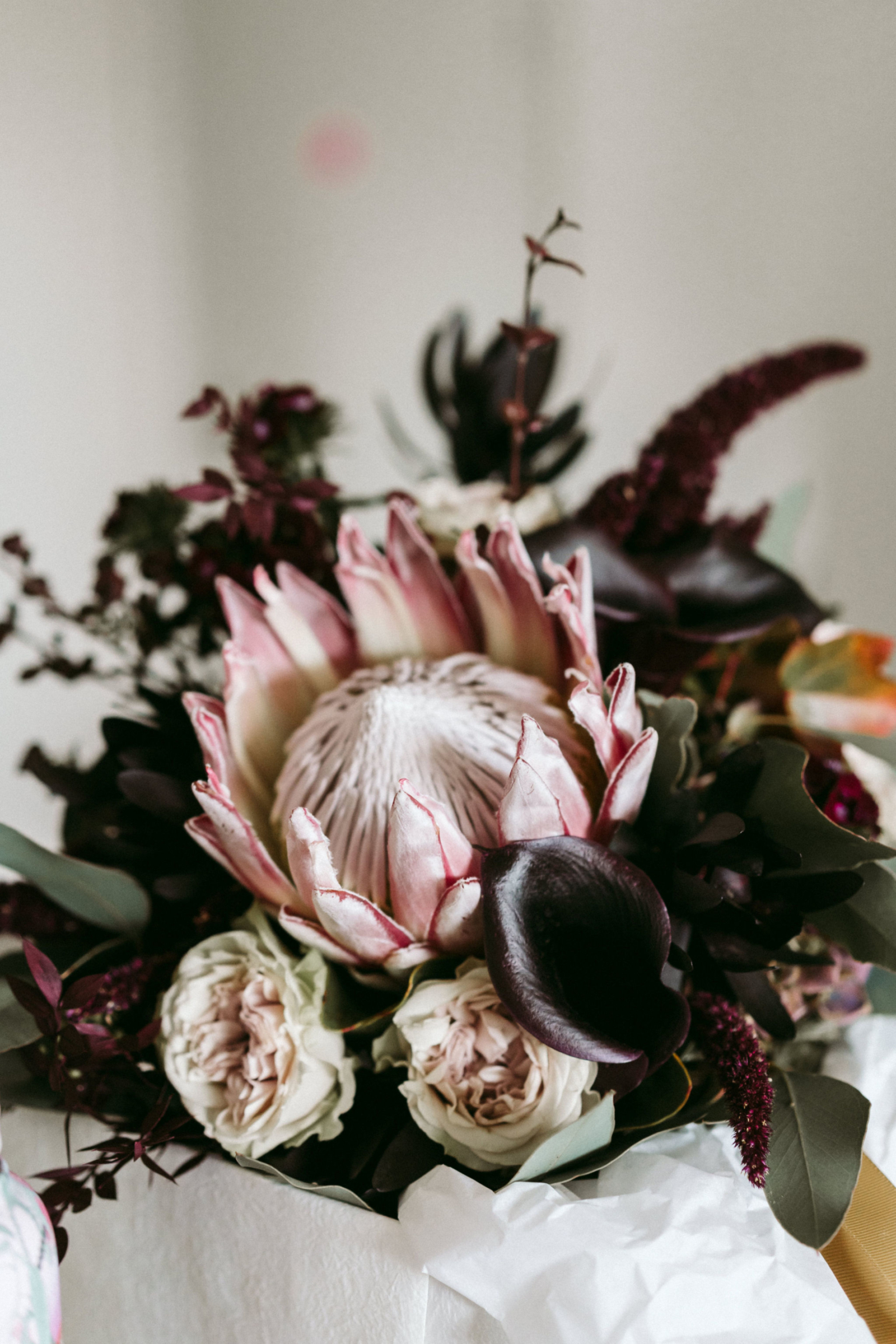 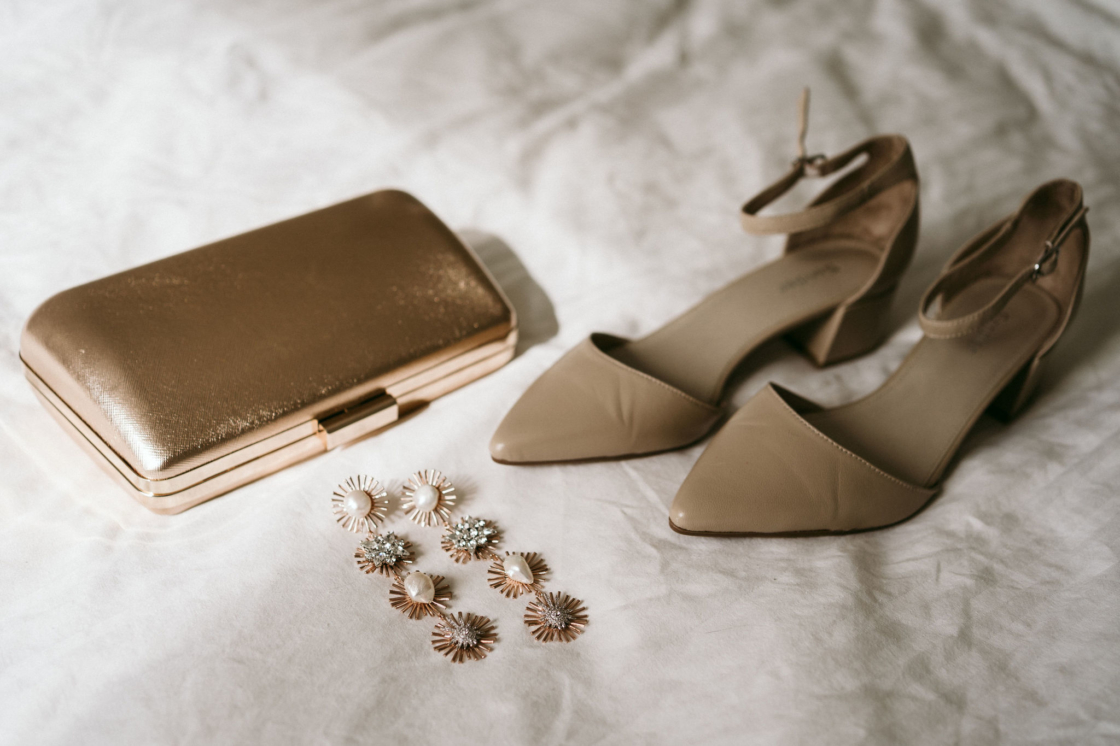 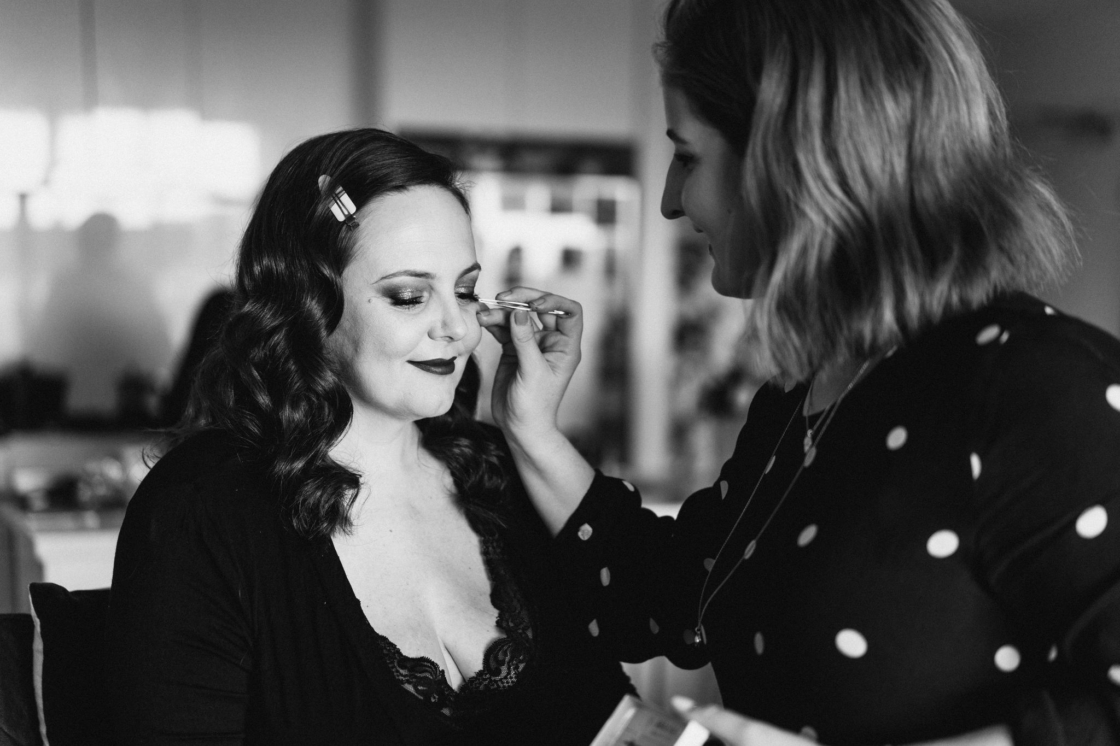 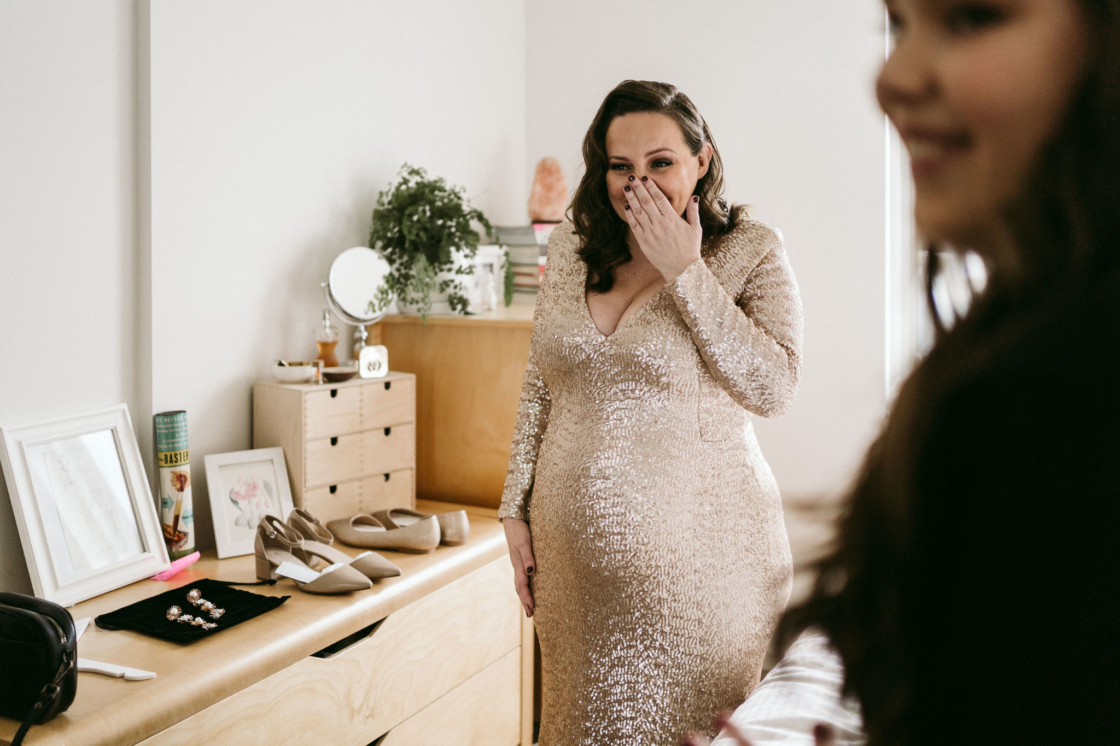 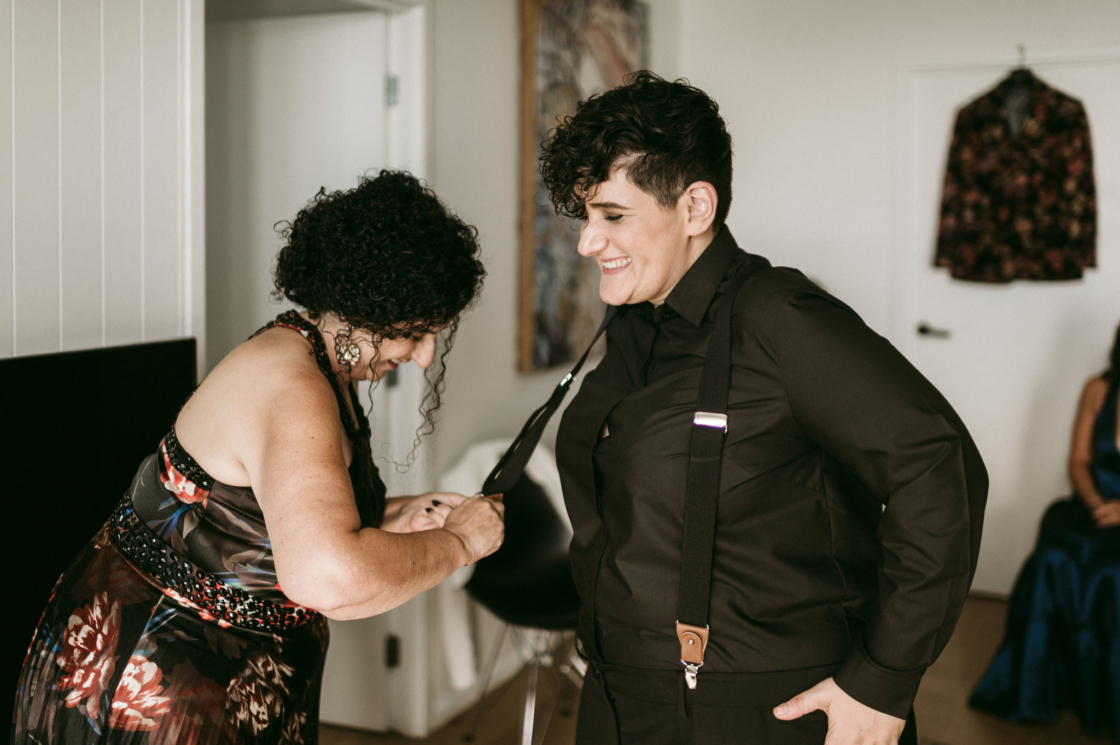 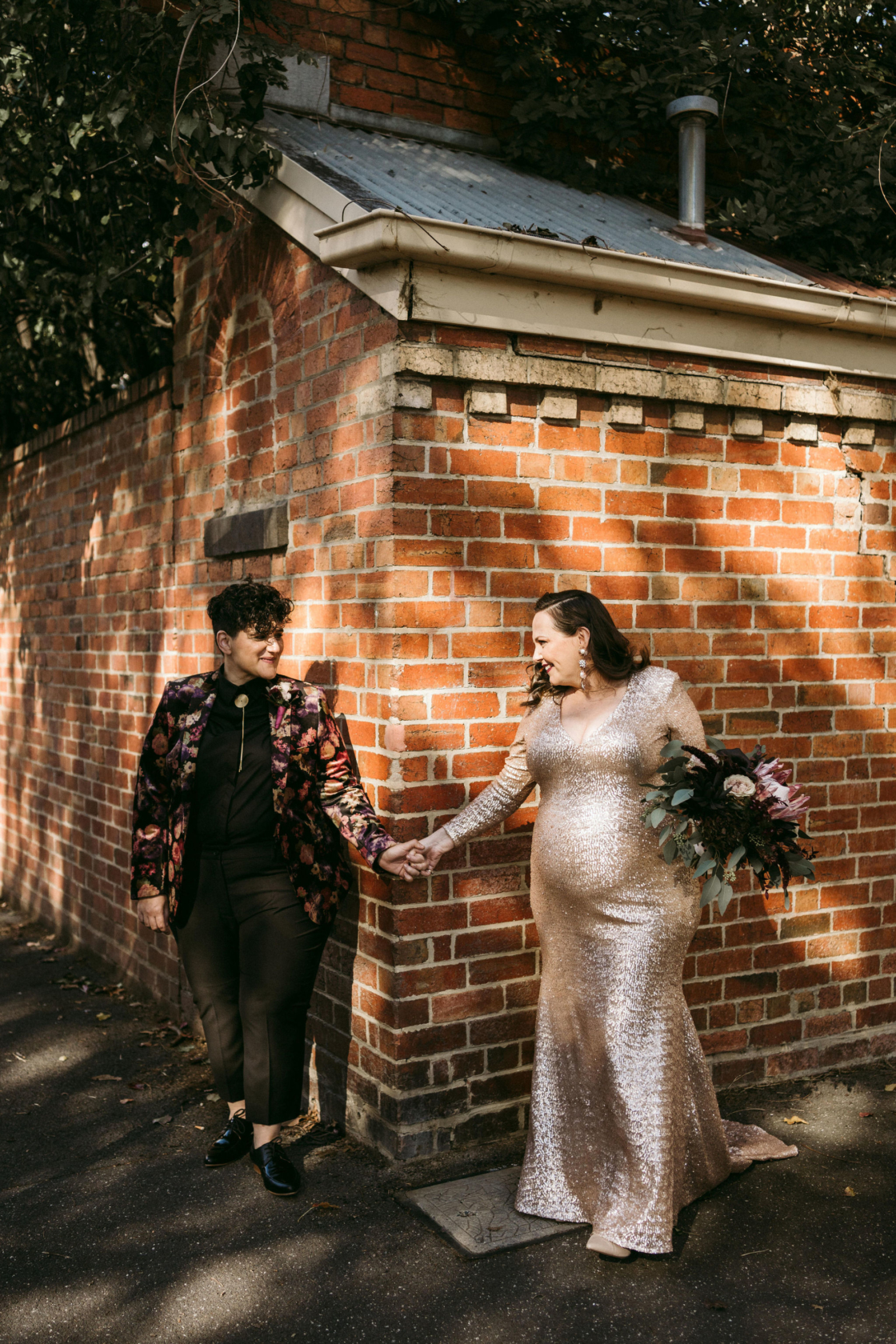 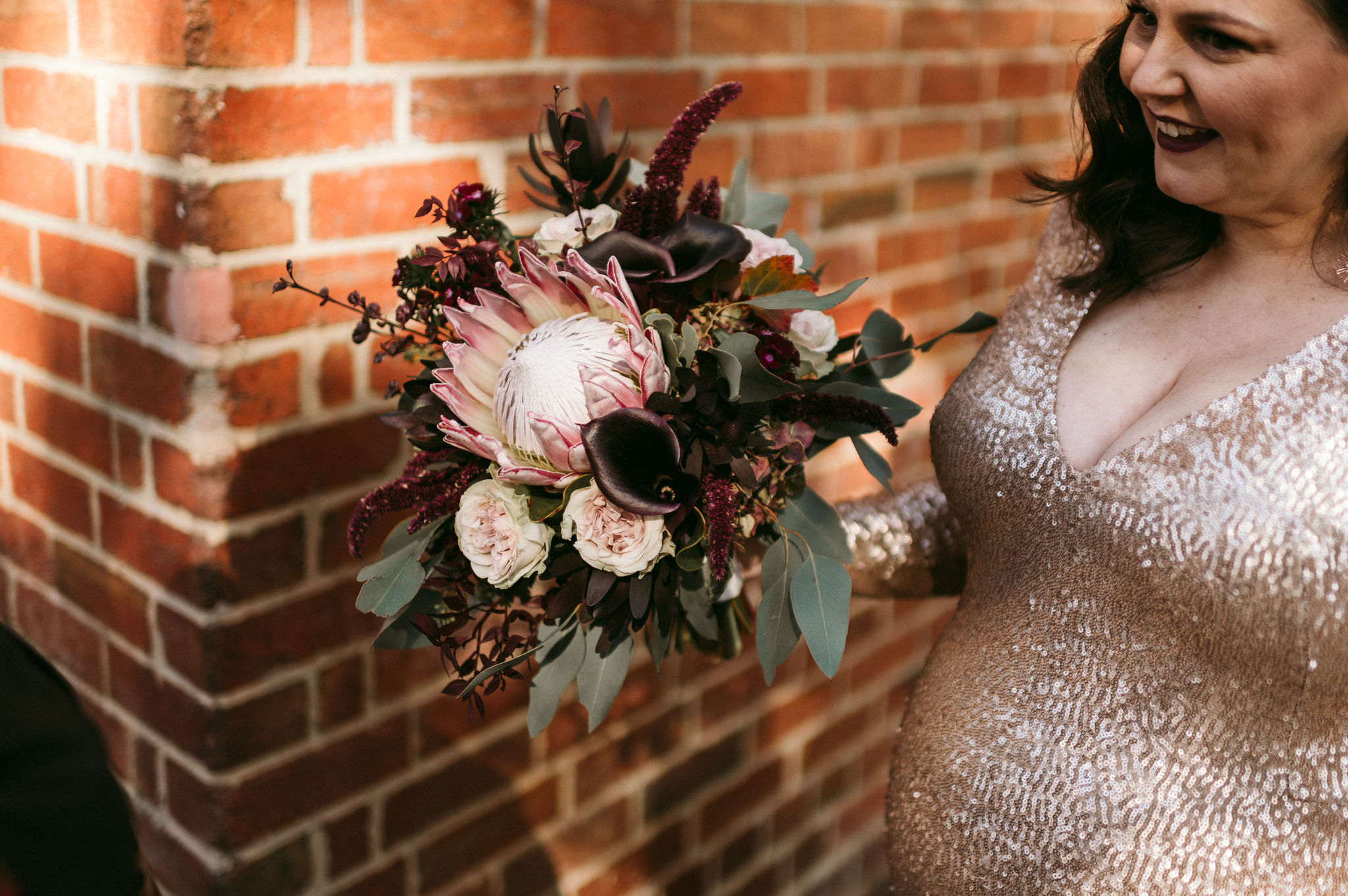 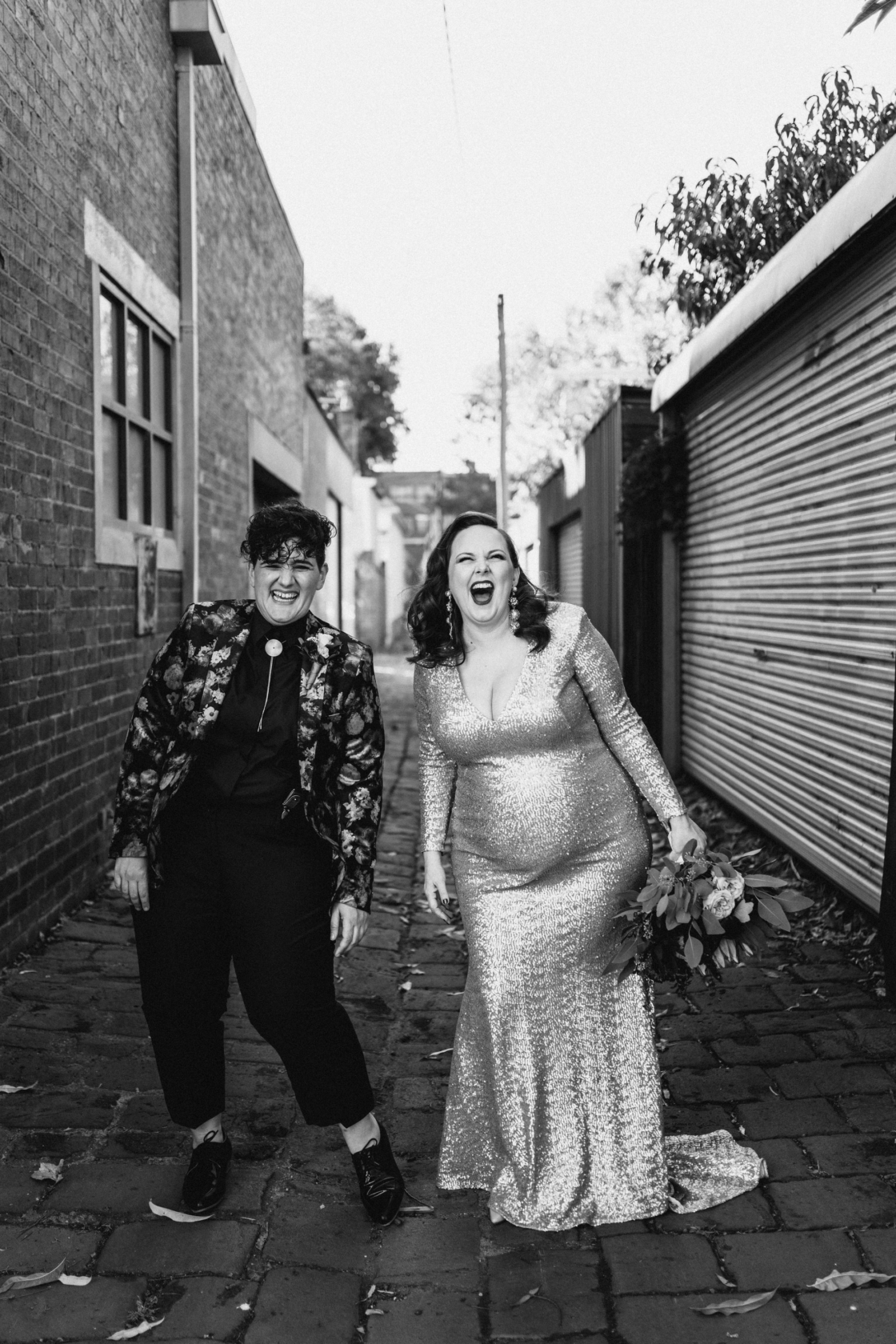 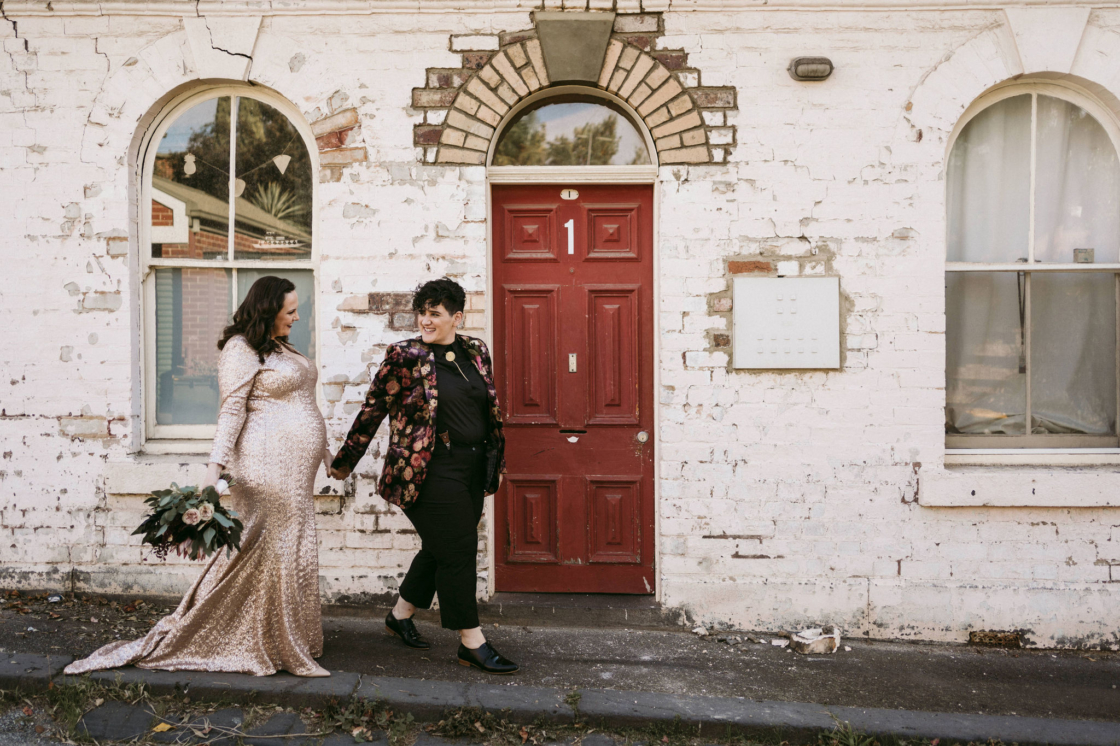 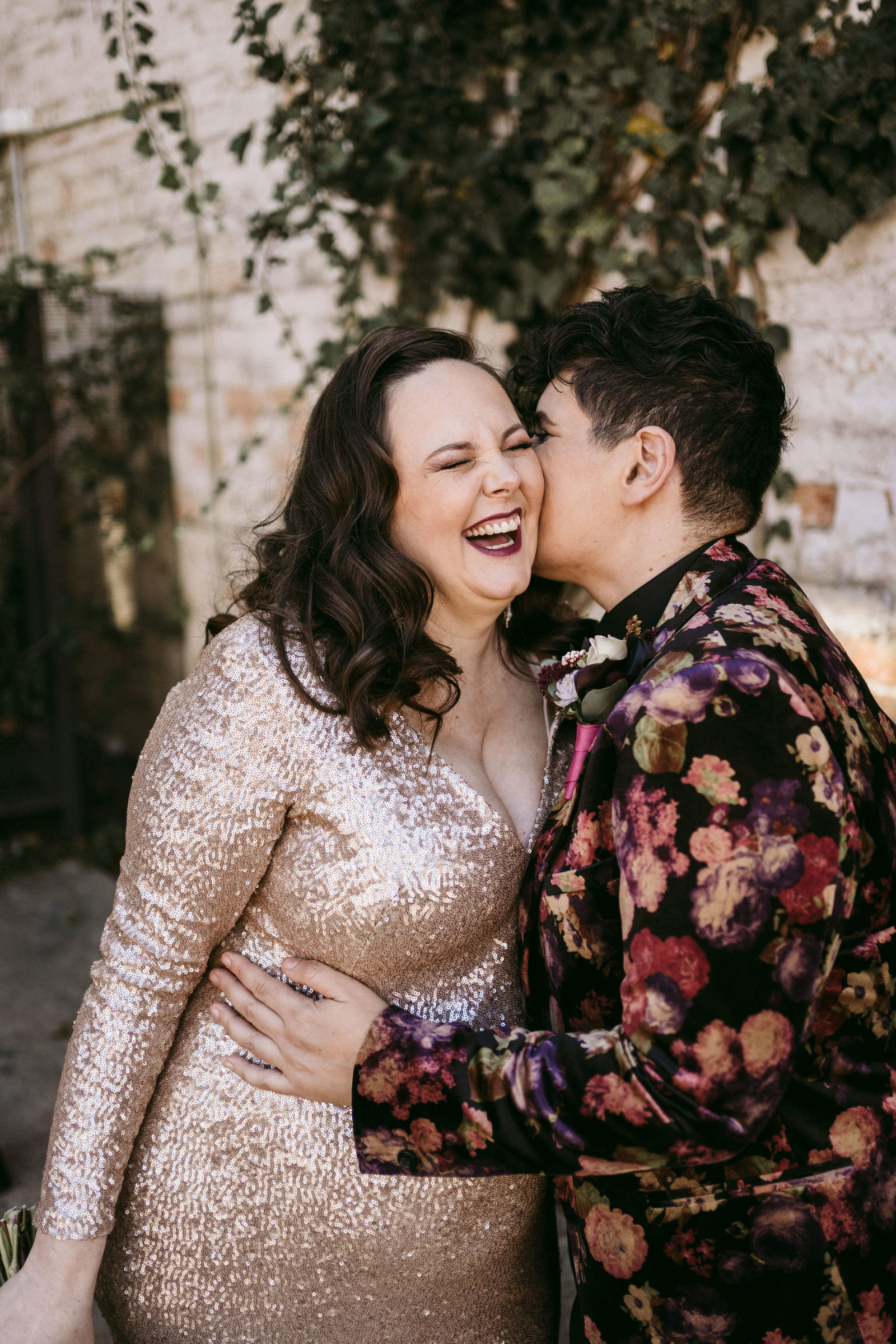 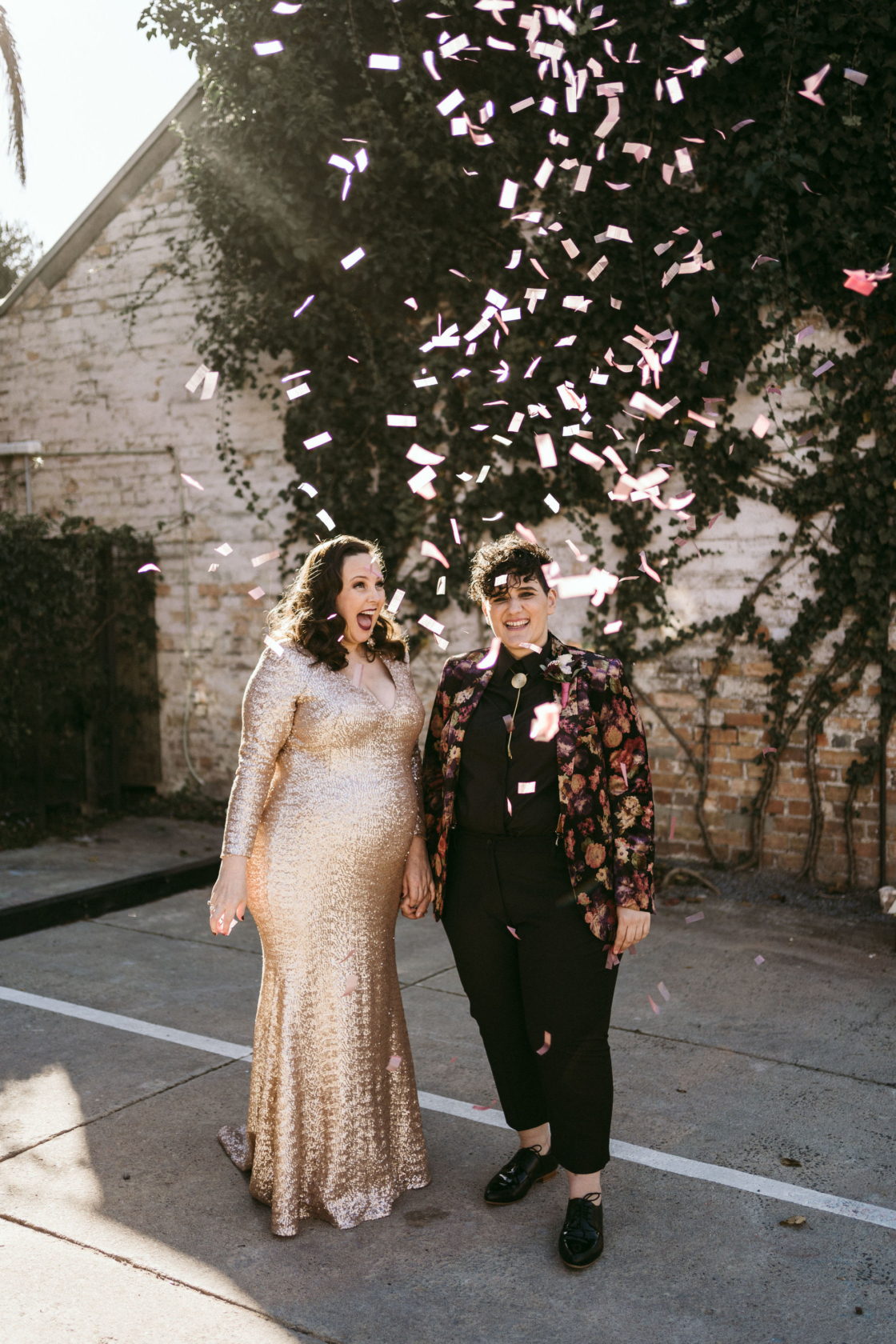 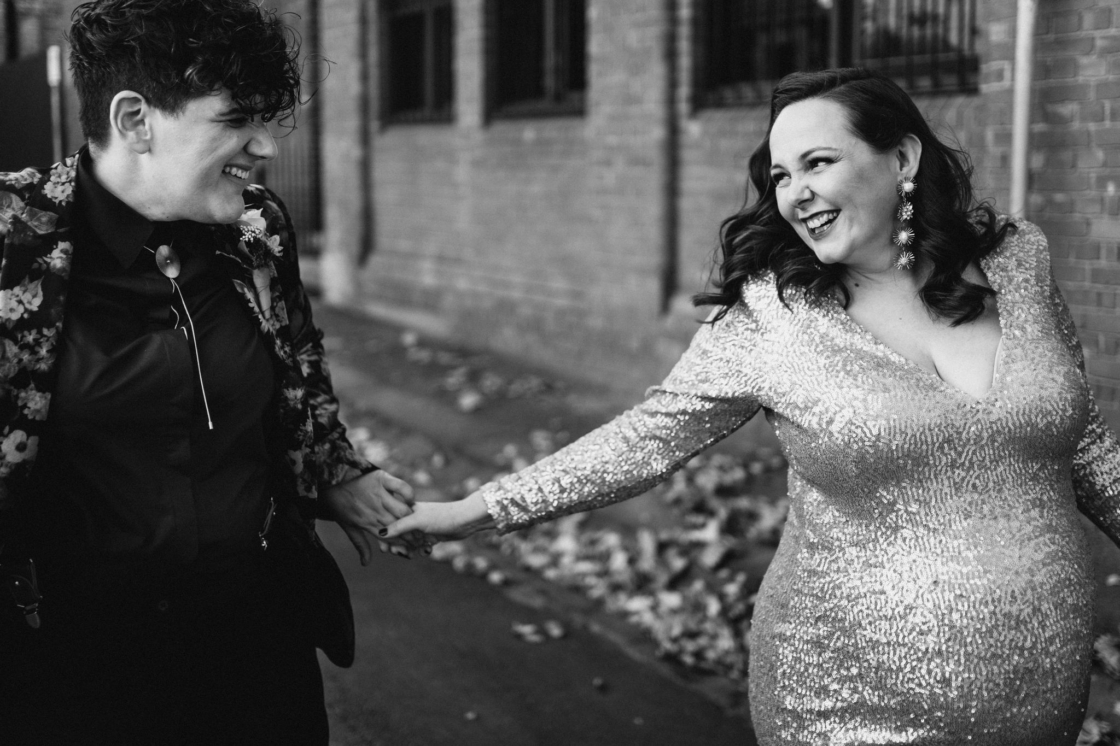 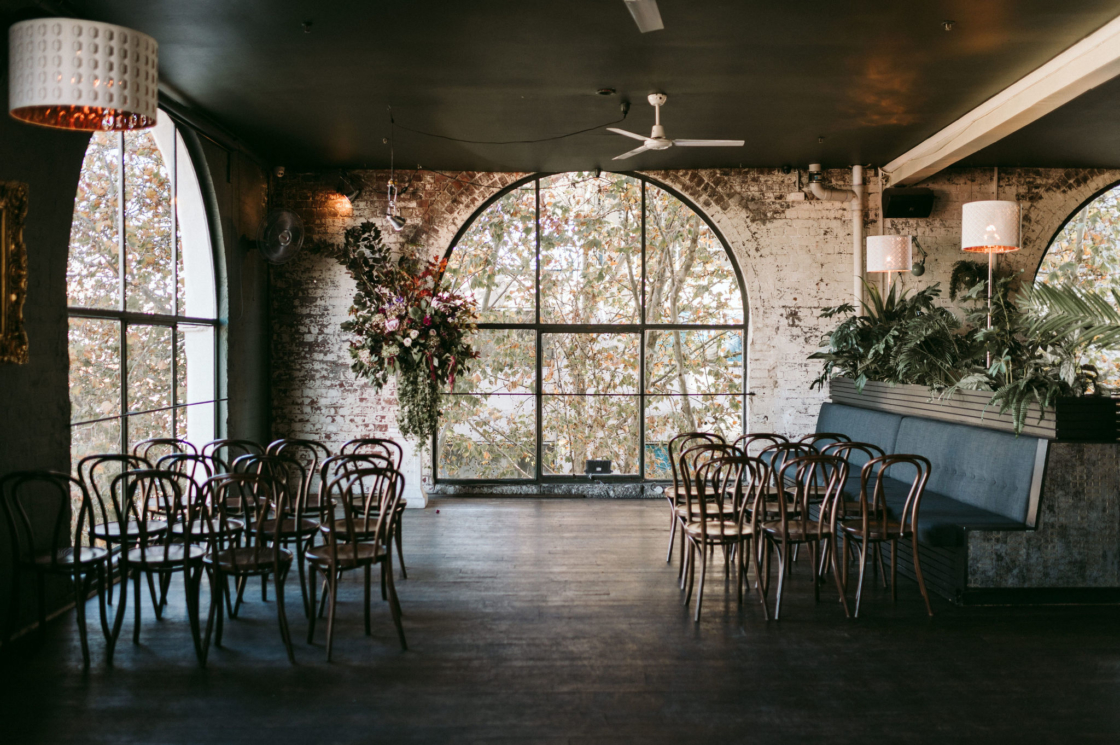 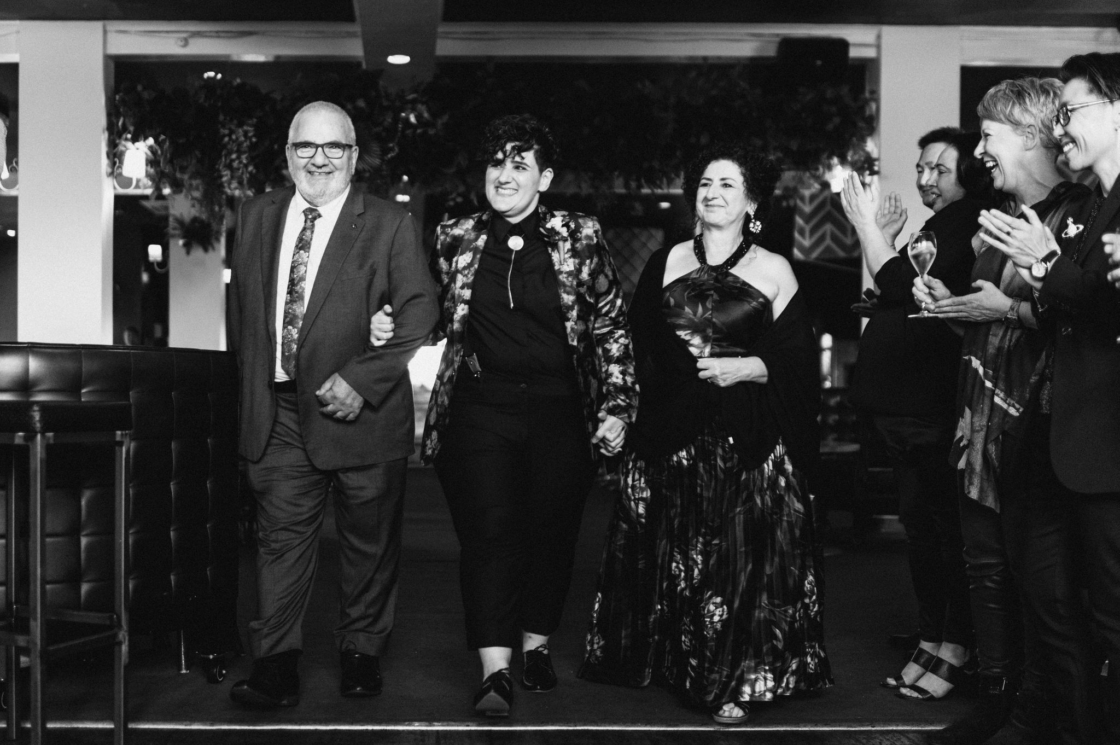 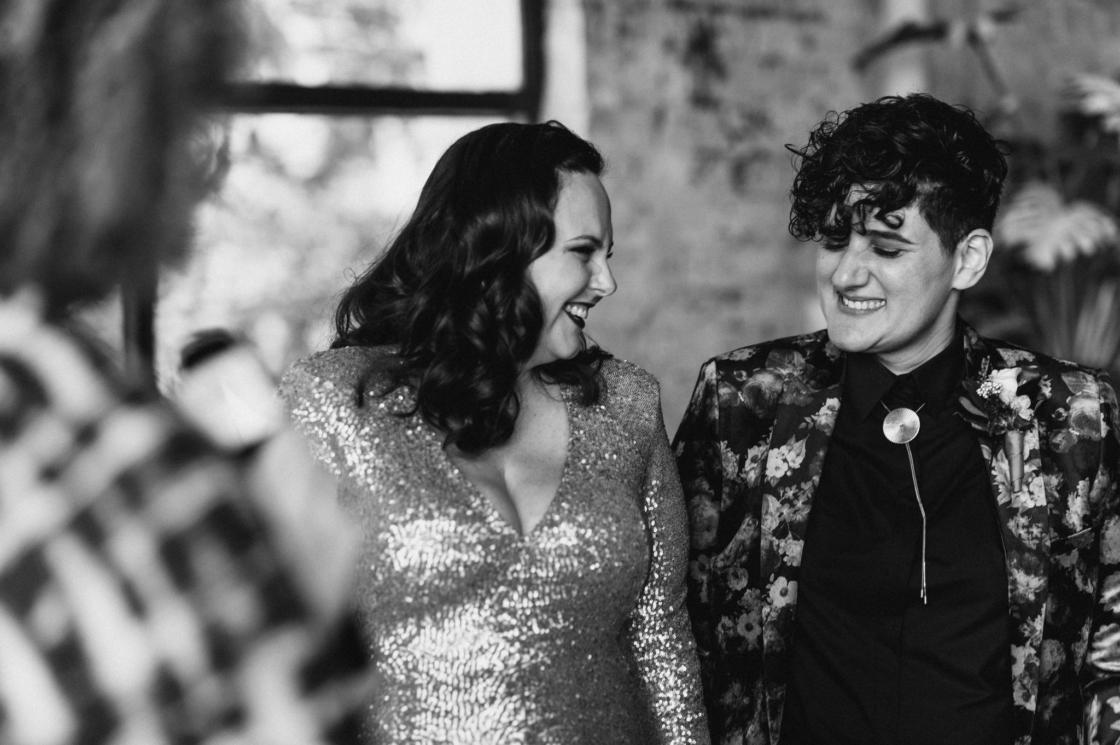 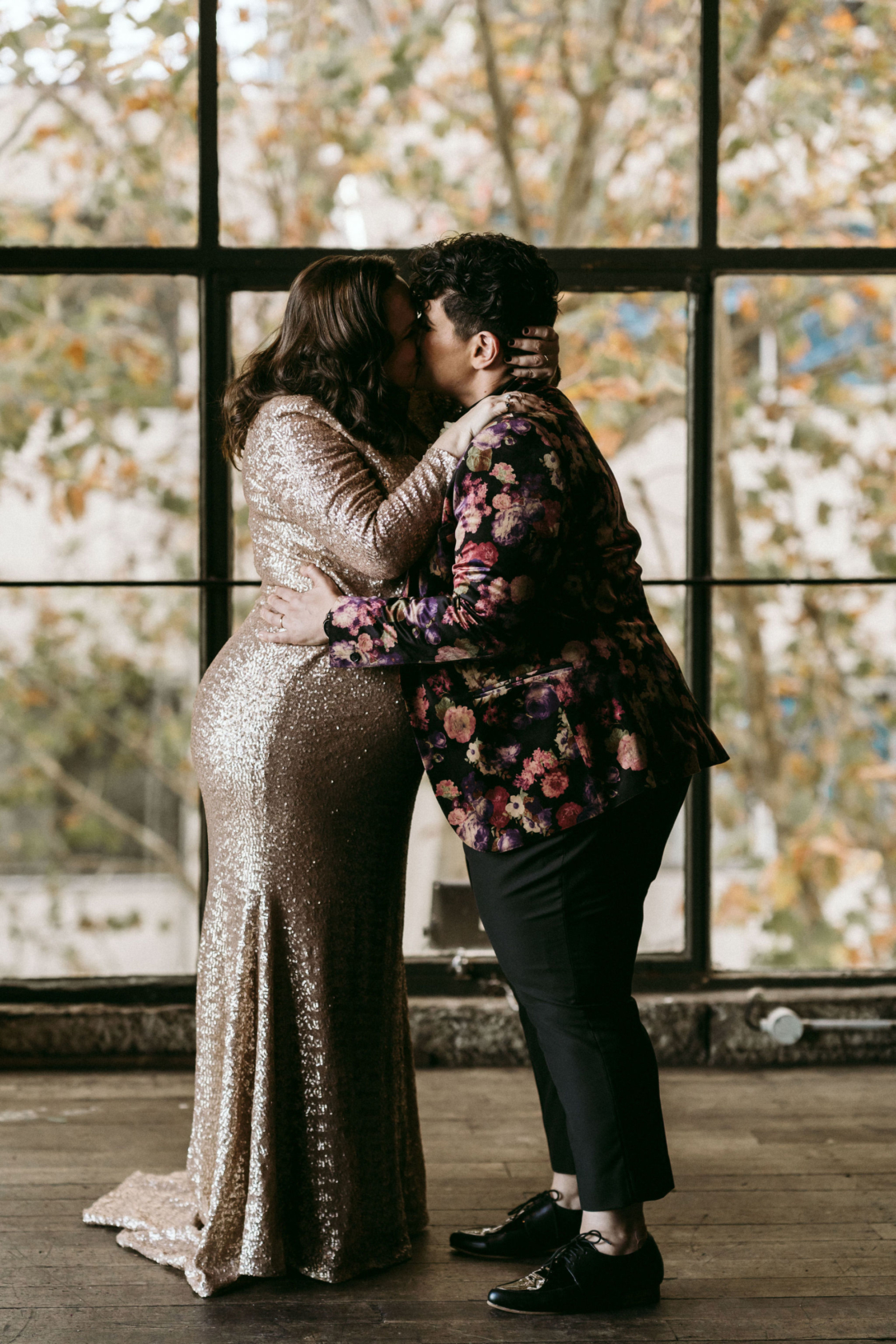 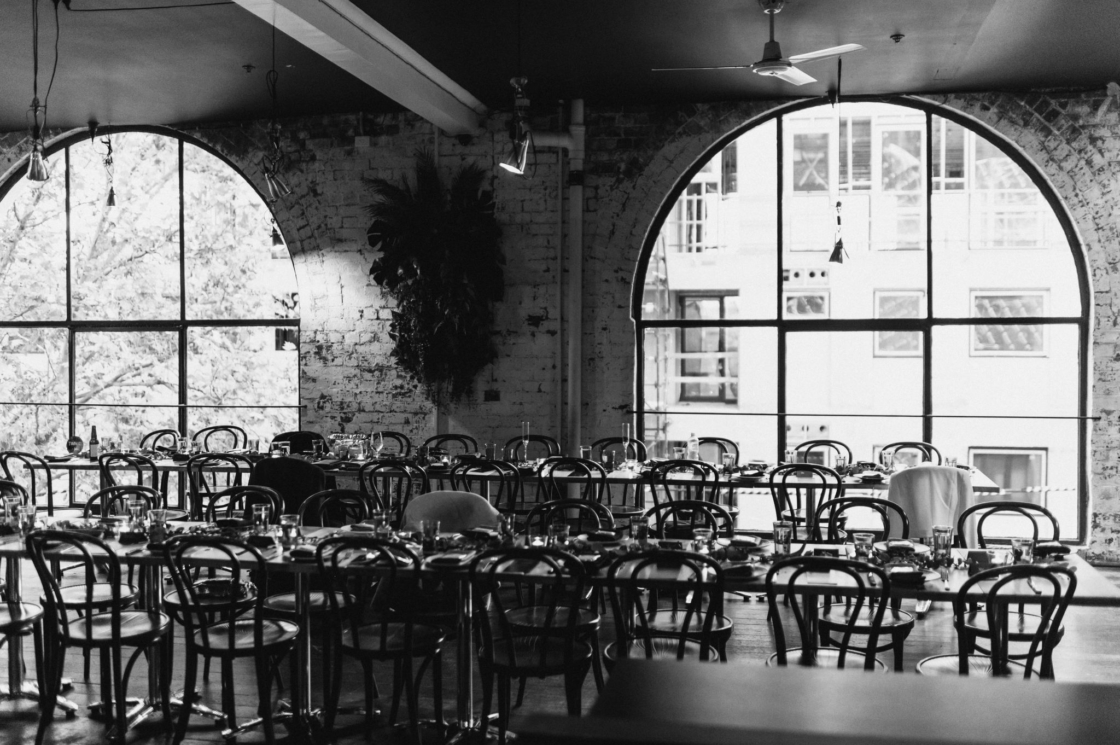 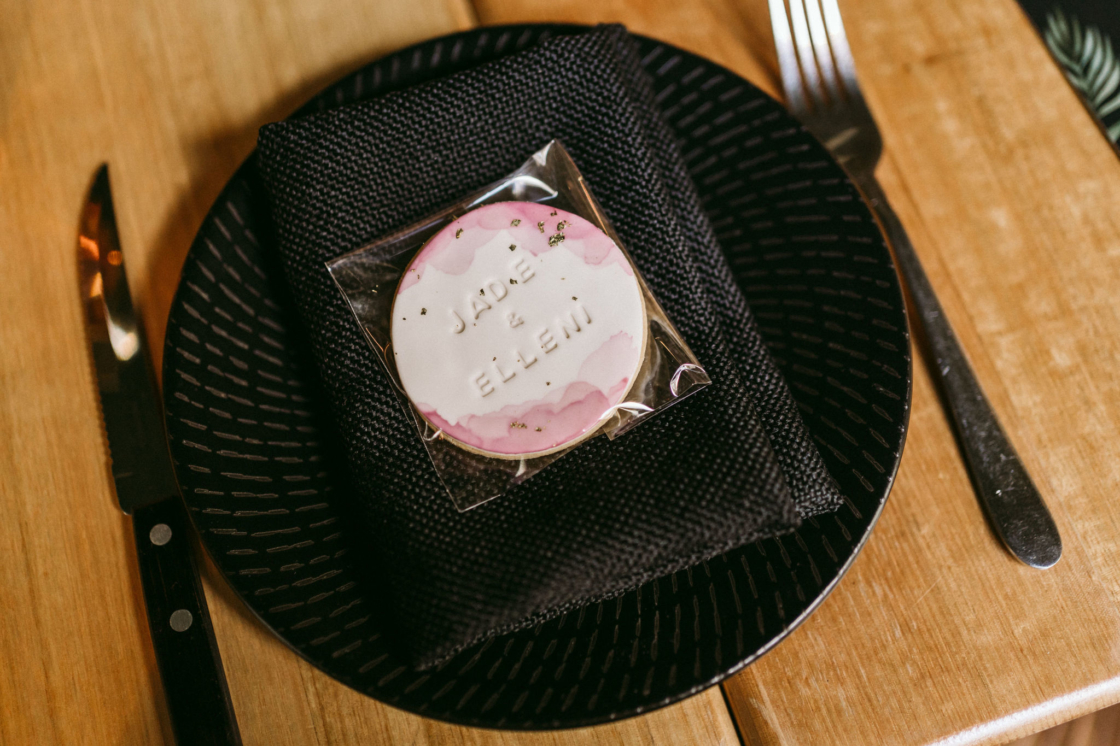 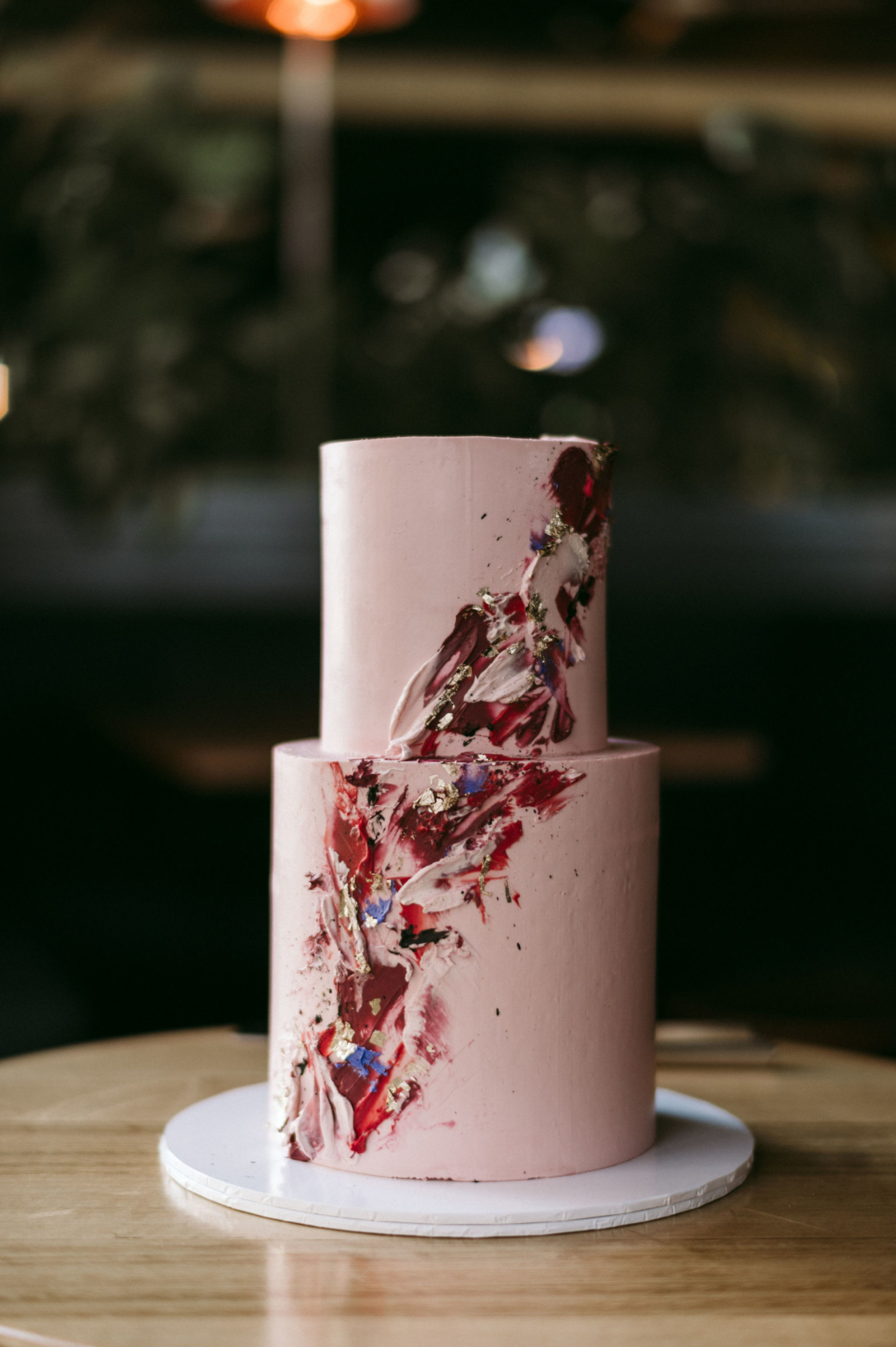 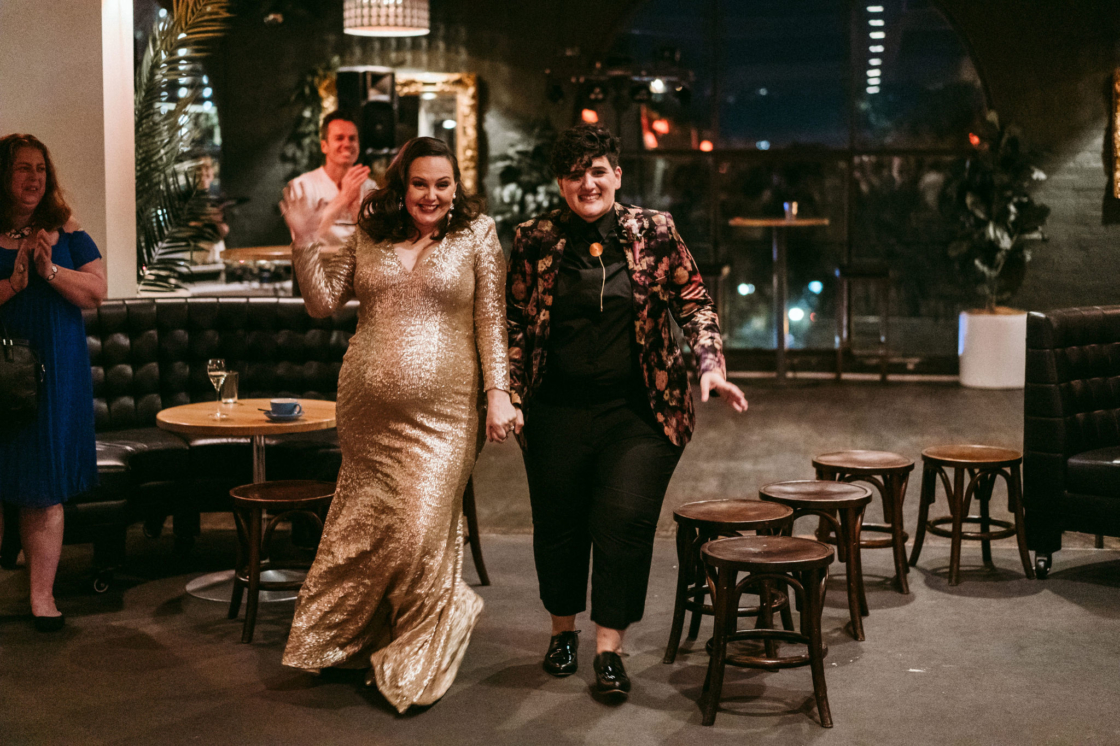 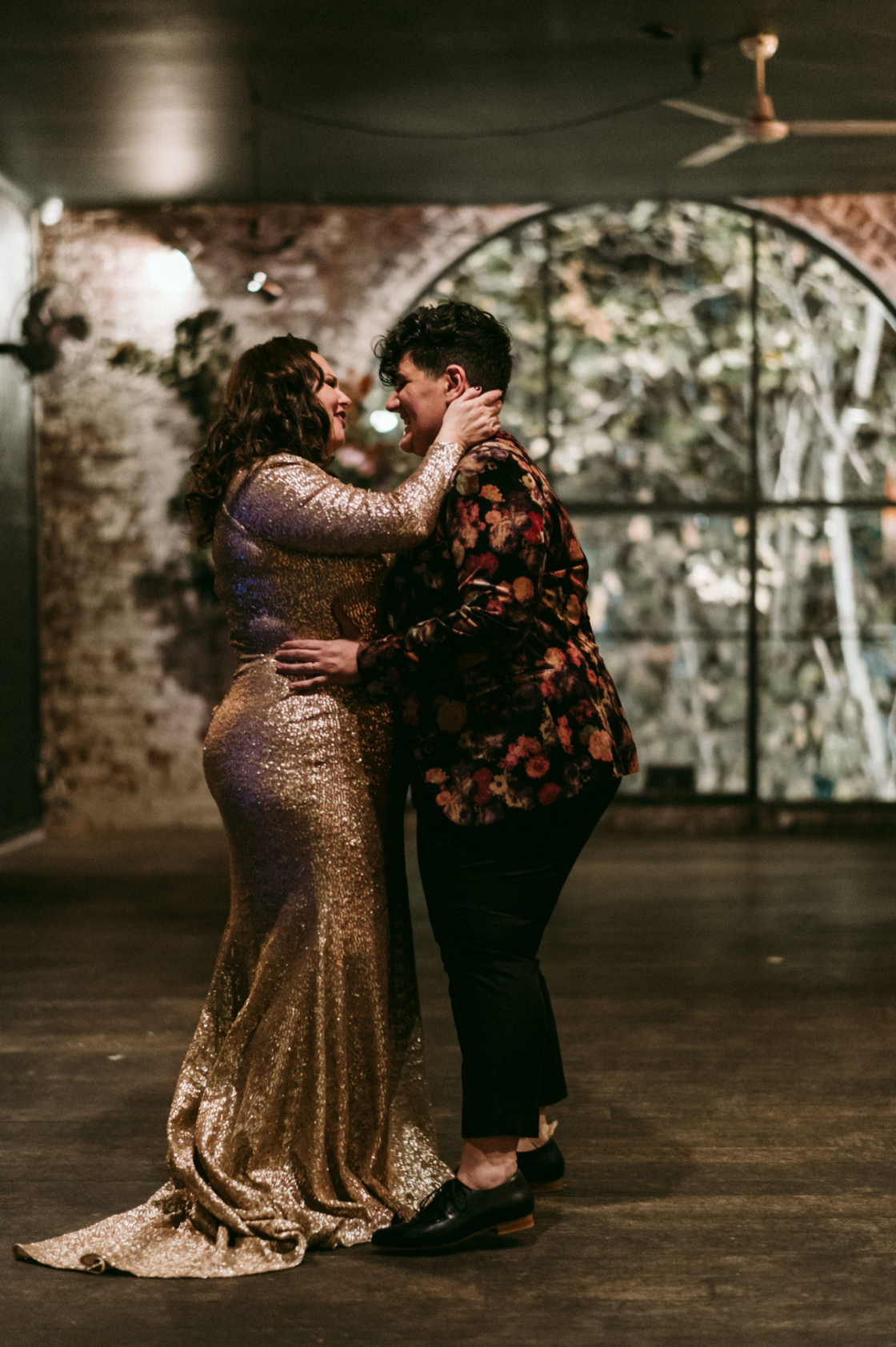 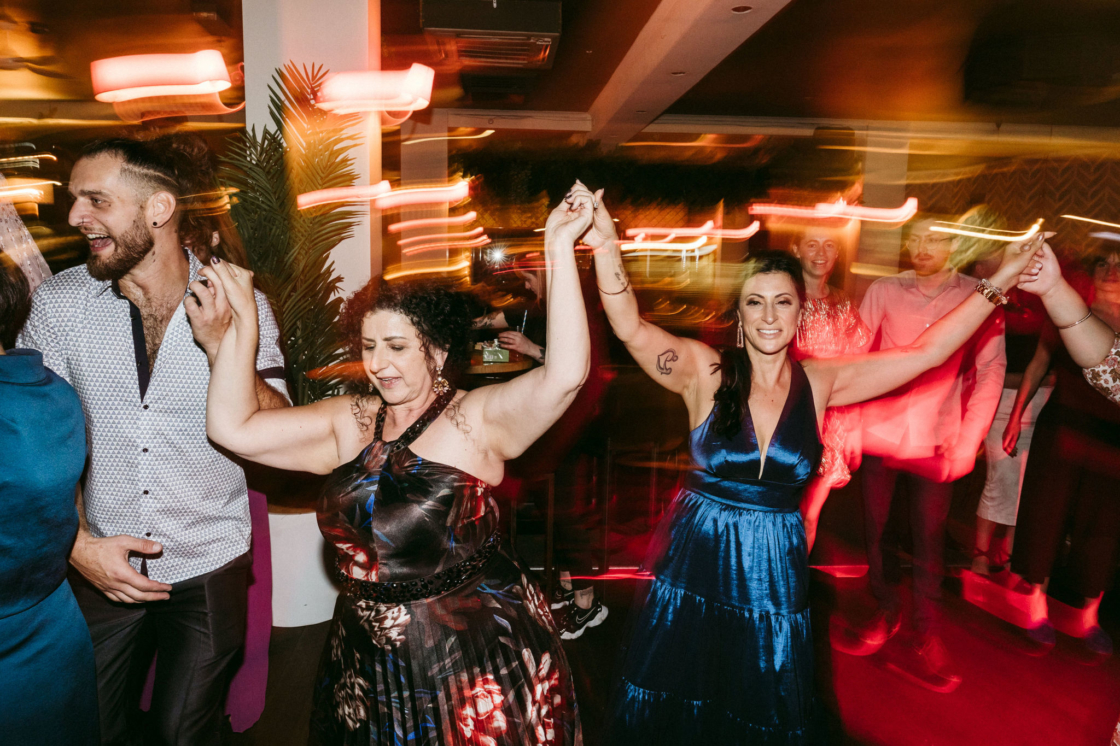 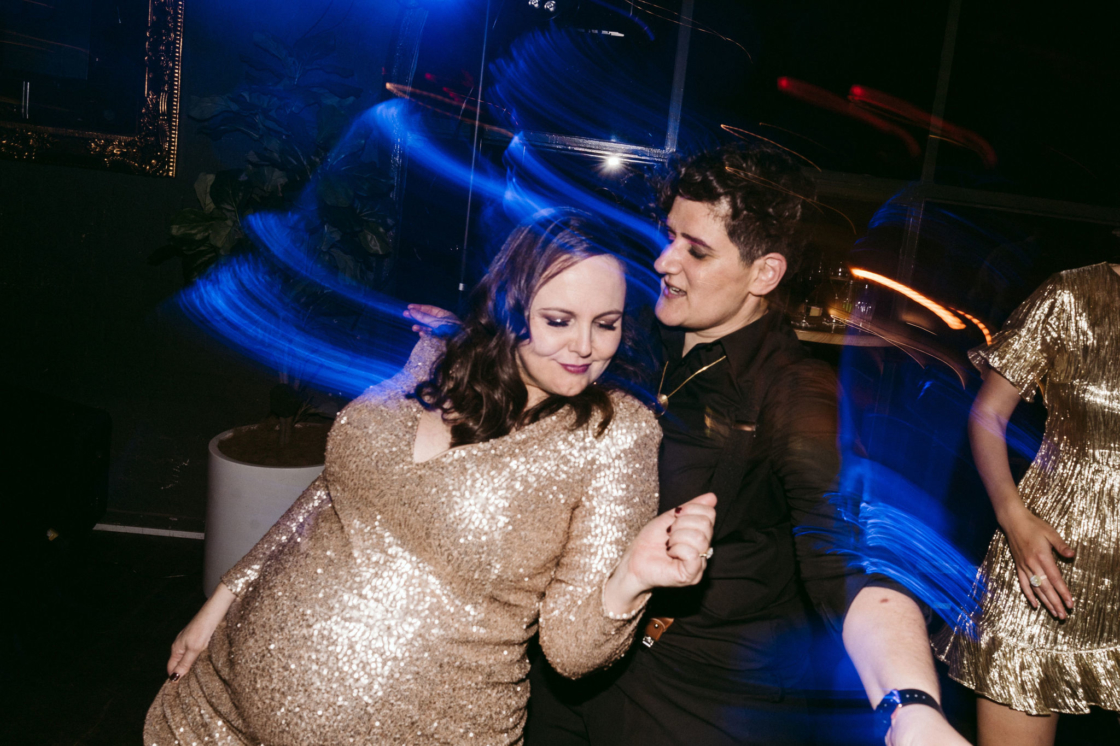